So, unless you’ve been in outer space for a couple of weeks, you’re probably aware that Secretary of State John F Kerry has given Russian President Vladimir Putin and his Russians until Monday to withdraw from Crimea and to stop threatening Ukraine with a Russian invasion.  Whew!

You can read about it here:  John Kerry: Russia has until Monday to reverse course in Ukraine

Of course, this is after castigating President Putin for being a 19th century kind of guy and indicating to him that his behavior is so not G-8-ish.  These are very tough words but a real “deadline” is just so much more powerful.

Of course, the results of such lines, red lines and deadlines have been spotty at best.  “Spotty” meaning they have essentially been ignored.

Russia leaning forward in their saddles

The Russians have seized the Crimea.  This is no longer a work in progress.  The yard sale signs are already in place.

The boys in Kiev may not be willing to process this information, but at this instant in time the Crimean Prime Minister has stated his preference for being part of Russia, the Crimean Parliament has formally voted to do the same and there is a phony plebiscite to be voted upon this Sunday.

BTW, the results of the vote have already been tabulated.  It passed overwhelmingly.  The Russians are tactfully waiting until Sunday night to announce the results.  Sporting of them, no?

The United Nations did something similar to this when they allowed Kosovo to secede from Yugoslavia by means of a similar plebiscite.  Everyone pretended to be surprised when the vote said:  “OK, let’s secede.”  Albanians and Muslims killing each other wholesale made the votes easy to gather.

Still, nobody really asked the sovereign nation of Yugoslavia whether they thought this to be a good idea.

The Russians are simply saying.  Hey, this was good enough for Kosovo under UN supervision, so let’s do the same thing in the Crimea and we’ll oversee the election.  No reason to bother the UN.

The Boss having been a professional soldier as a young man was quick to recognize from available aerial video the tell tale signs of units with POL resupply in bladders, ammunition stores, signals installations, casualty collection points, supply points and headquarters elements deployed in forward positions as signs of units ready to cross the LD (line of departure) and go make friends.

These assembly points are tactical deployments not guys hanging around the motor pool smoking cigarettes and telling jokes.  This is how a unit or a collection of units is deployed just prior to launching a premeditated attack.

This is not how units on preordained training would deploy and the location — astride the border — is not where one would concentrate to conduct training.  So, the “preplanned maneuvers” bit is not really believable.  Cynic and skeptic that The Boss can be sometimes.

No, these are preparations for launching a war.

Note also that the Russian Parliament a week or so ago told Vladimir Putin — go for it, Vlad.  They authorized Russia to launch an attack.  How unexpected, no?  Protect those legitimate Russian stakeholders in the Crimea and Ukraine.  Go assist them and tell them we’ve heard their pleas.  Really, the Russians are just peace makers, no?

NATO is a military alliance which exists solely to provide a coherent and combined defense of its members against aggression.  NATO toyed with adding Georgia and Ukraine to its membership.

Had we allowed NATO to embrace Georgia and Ukraine, the fat would be in the fire and we would be going to war.  Of course, when the hungry Russian bear gets done chewing up Ukraine, places like Estonia, Latvia and Lithuania who are NATO members may find themselves getting similar treatment.

This is a very dangerous game here.

The outcome is easy to see.  Even Sarah Palin can see the outcome from where she sits.  The Russians will take the Crimean peninsula.  [Hint:  They already have.]

The plebiscite will show that the folks want to become part of Russia.  The ballots are already tabulated though the vote isn’t until Sunday.

The Russians will take at least half of Ukraine, the eastern half.

The world is going to be a very scary place in the next few years.  Nobody really wants to fight for Estonia, Latvia and Lithuania.  I don’t, sayeth the Big Red Car.

Secretary of State John F Kerry’s Monday deadline?  Phhhffft, says Vladimir Putin.  This is a guy who will take his shirt off quicker than a Las Vegas stripper and for less at stake.  The Las Vegas stripper is going to have to see some folding money.  Vlad just has to get on a horse. 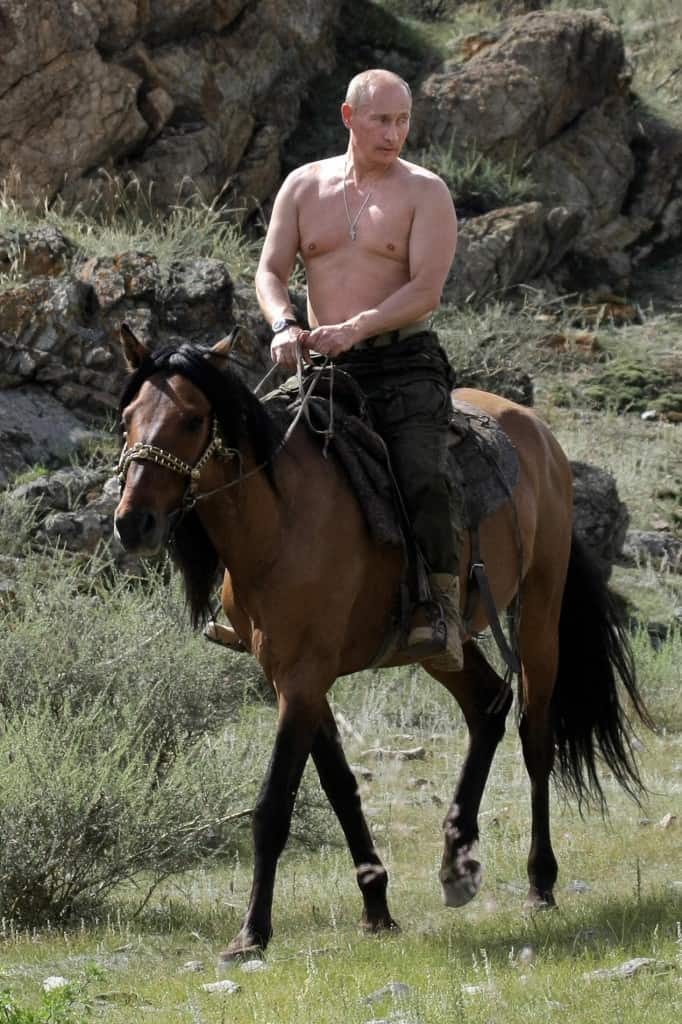 Guys like this don’t respond well to deadlines.  Particularly from metrosexuals like Kerry and Obama.  Just stating the obvious.  Putin thinks them to be pussies.  Not what a polite person would say but there are very few barechested polite folk left in the world.

But, hey, what do I really know anyway?  I’m just a Big Red Car.