Big Red Car here.  Going to be a great day.  Me and The Boss have already been for a good swim.  I let The Boss swim while I keep an eye on things.

This morning, clear and when The Boss looked out his office window, there was the UT Tower shining bright in the before dawn light.

It doesn’t get better than this — On Earth as it is in Texas, ya’ll!

Here are three damn good blog posts on the subject.

Fred Wilson at AVC.com on Mentor/Investor Whiplash.  This is a link, so click on it.

Then Brad Feld at Feld.com on The Benefit of Mentor Whiplash.  This is also a link, so click on it.

Then, me, the Big Red Car had the following to say:  Advice.  This is also a link.  This blog post was written earlier than the other two but was on the same subject.

Three slightly different takes on the subject.  If you are not reading what Wilson and Feld have to say on all things Venture Capital, then you are missing some world class information.  They are both very generous guys at the top of their profession who are doling out good and timely information.  This is like reading the textbook before it gets written.

The Boss has always subscribed to the Spice Analogy.  It is a simple concept but it applies to a whole lot of things.

A pinch of spice will make the contents of the soup pot more savory and delicious.

A handful of spice, on the other hand, will destroy the flavor and make it inedible.

The big thing, obviously, is the amount of spice.

As applied to advice the analogy is obvious.  Be careful about how much advice you implement all at one time.  Try taking just a pinch of spice.

One of the most pointed analogies is the relationship between the pilot and the approach air traffic controller as you enter the controlled airspace at a big airport with multiple runways and a lot of traffic.

The Boss often used to fly into Charleston, SC which shares the airport with the Air Force which flies some very heavy metal in and out of  that airport.  So, approach and departure ATC moves that traffic around with great precision to keep it out of each other’s way.  Mix in some civilian traffic arriving at the end of a long flight and you have an environment in which advice becomes very important to safety.

Say you are arriving in the summer time from Natchez, having refueled enroute from Austin By God Texas, and the weather is typical summer cumulus bunching up along the coast and the cloud tops are at 8,000′, bottoms at about 1,000′ and you’re arriving at 9,000′.

You are going to be making an instrument approach because you cannot “see and avoid” other traffic while you are in the clouds from 8,000′ down to 1,000′.  You will be completely blind but that doesn’t even faze you, you are an accomplished instrument pilot, Old Sport.

At 1,000′, when you pop out of  the clouds, you will be able to see just fine and make an otherwise normal visual approach to the runway.

Approach is going to advise you how to get to the instrument approach you will fly.  The Boss always favors an ILS (instrument landing system) approach which is an electronic highway in  the sky guiding you vertically and horizontally with an electronic directional beam you can pick up on a radio instrument coupled to an HSI (horizontal situation indicator).

It is simple to do when you have done it a lot of times.  At first, when you learn to fly instruments it can be a bit intimidating.

Piece of cake.  Something that instrument pilots do all the time.

So you are arriving at 9,000′ and flying a heading of 090 — due East.  After you check in with Approach ATC, they say something like this:

You reply:  “136MD, turning to 030, 6,000′, ILS Runway 33.”  As you become an experienced instrument pilot, you read back of the instructions becomes clipped and short in order not to block the radio waves.  Approach will acknowledge that read back their instructions correctly.

Now you begin to execute the advice. 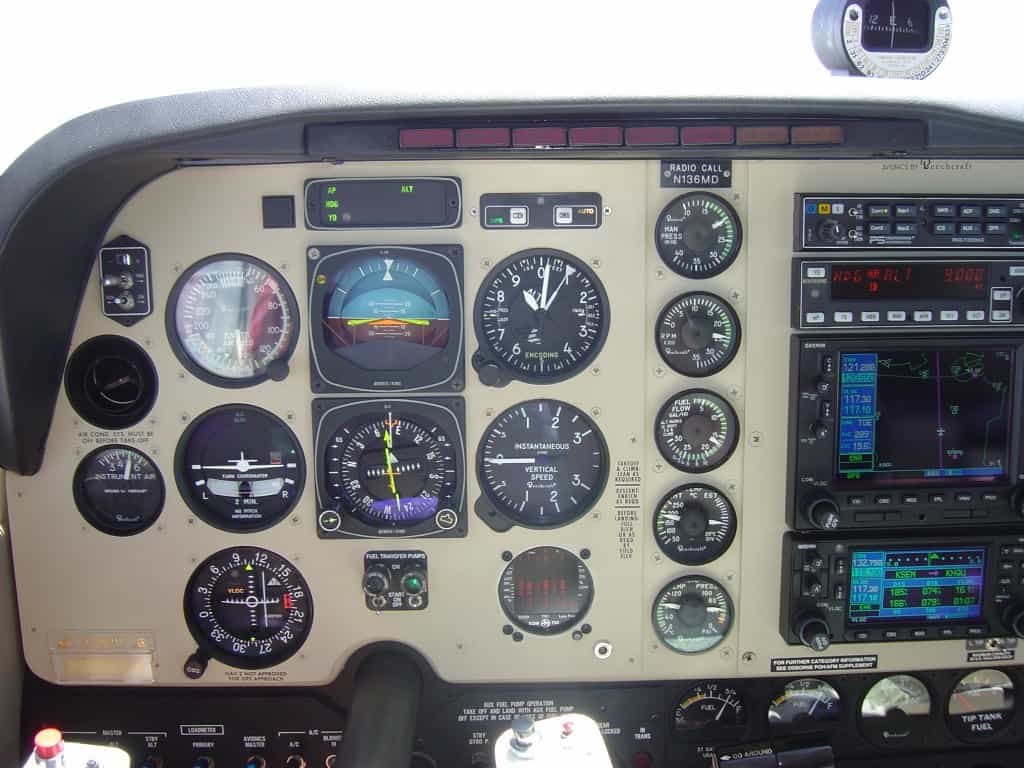 This panel shows the plane level at 9,000′ flying approximately 080.  The plane is navigating using the GPS coupled auto pilot [called “George”] and is between KSEM (Selma, Alabama) and KHQU (Thompson, Georgia) which means The Boss is flying to avoid the Atlanta airspace and is traversing the area south of Atlanta.

If you are really on your game, you can also see that fuel is being transferred from the right tip tank to the right main because the green light on the transfer pump switch is on.

In the taking of advice, the Big Red Car suggests you take the same approach that a pilot would take.  Make incremental movements.

Given the previous instructions, you would set a particular instrument to show the desired 6,000′, retard power to begin the descent and then descend.  [Look at the second instrument in the “stack” to the right and see the altitude setting entered — 9000′. ]   You would like to descend at 500 FPM.  Your Vertical Speed Indicator will show you your rate of descent and you can adjust your flight attitude to maintain a controlled 500 FPM of vertical speed.

You would simultaneously set a directional gauge to the new heading — 030 — and begin turning in that direction.  Pilots call this their “directional bug”, a movable bug on their compass instrument which shows the new heading and gives you a target to which to fly.  Look at the HSI in the middle of the lower row of the Six Pack and you can see the orange heading bug.  You turn this to show your new heading and fly to that heading.

You would turn the airplane very smoothly and slowly because, face it, you are a very smooth dude.  [Haha, Big Red Car, get serious here.]

You would not simply turn to the new heading — a 60 degree change — all at the same time.  The plane in flight lags your control and would overshoot the heading.

You would establish your slow turn and turn to, say, 040 — 10 degrees short of your final heading.  As you arrived at that heading, you would slow your rate of turn even more and smoothly nibble in on your final heading of 030.  In this manner, you would not overshoot your final heading and have ATC yell at you.  ATC expects you to know how to fly your airplane and doesn’t care how many flight hours you have.  This is their show and they are doling out the advice.

This incremental movement and the notion of implementing advice on a slow iterative and incremental basis are very compatible thoughts.

As you follow the Approach ATC instructions, you are getting very close to the ILS — the electronic beam in the sky that you will be flying to find the runway end — and Approach gives you your final instructions.  They have taken you through a number of different headings and descents.

“N136MD, turn to heading 350, descend and maintain 1,500′ until established on the localizer, cleared to land ILS Runway 33.”  The localizer is the vertical portion of the ILS and gives you the direction — not the altitude — you will be flying.

You acknowledge the instructions:  “136MD, 350, 1,500 until established, cleared to land ILS Runway 33.”   Now Approach knows that the pilot is on his own to intercept the localizer and then to fly the electronic beam descending into the end of the runway.

Now the pilot looks to his HSI (horizontal situation indicator), a very fancy compass/directional instrument which will show deviations left and right to the localizer and up and down for altitude.  This is the instrument in the middle of the bottom row of the Six Pack.

When flown perfectly, the HSI will be rock steady with the plane flying right on the wire in the sky.  The Boss can make a very good ILS approach.  It takes a long time to learn and it takes practice to maintain those skills but once in the groove, well, Grasshopper, you are grooving.  [OK, Big Red Car, dial it back a bit.]

When receiving and implementing advice, take it in small iterative increments and make your changes in similarly small increments.  Keep a steady and smooth hand on the changes.  Advice almost always requires changes to be made.

When implementing the advice, wiggle in on the desired changes incrementally like a pilot turning the plane to a new heading and waiting for the plane to catch up with the changes.

Keep track of where you are and where you are heading.  Read back to yourself — keep score — how the implemented advice is working.  Don’t just blindly follow it.  Measure it.

And voila, there you have it.