She wrestled them to the ground and made them eat shit. Figuratively speaking, or course.

Who actually ate shit? The American people but who cares about them anyway?

One must admire the style with which Hillary was able to face her accusers and maintain both the temerity of a second story man while exhibiting the skill of a pick pocket. [This is a genuine and sincere compliment. She is damn good.]

Don’t get me wrong, there were a few good Congressional Republican questioners sprinkled amongst the lick spittle Democrats who vied for the opportunity to anoint Hillary with the mantle of the victim — something she has raised to an art form though she had had the unfettered assistance of her media adorers to provide a bit of assistance.

On style, this was the best performance of a liar in any category and if snubbed by the Oscars, the Oscars should be scrapped. In the future, they should be called the “Hillary’s” — why not? 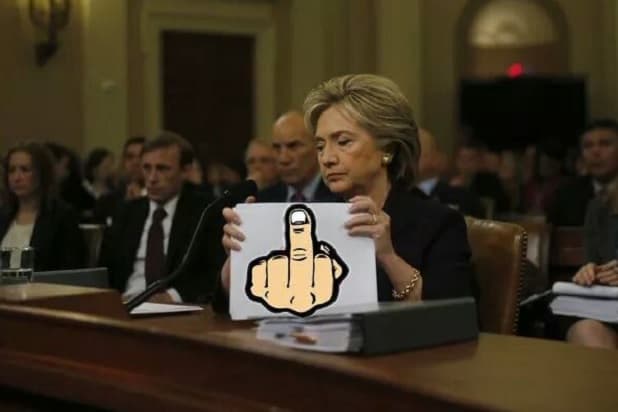 In that regard, candidate Hillary Clinton provided irrefutable evidence that she will be the Democratic party nominee, a formidable candidate, and a very plausible winner of the presidency. No mistake — her candidacy was buoyed by this performance. The Republicans advanced her cause at their own expense.

As to substance, Hillary dealt it and laughed through it.

1. Did she lie to the American people about the nature of the attack?

Well, of course, she did. She told America it was some lame video that drove the masses to go home get their mortars, RPGs, AK-47s and kill our Ambassador.

To her daughter — she acknowledged it was Al Qaeda. In real time. Because, after all, that was the truth. Not Hillary’s truth, just the truth.

To the Libyan prime minister — yep, it was Al Qaeda, not a video.

2. Did she lie to the next of kin of the American dead when their flag draped caskets arrived in the solemn dark of night at Andrews Air Force Base?

Well, yes, she did. Again, it was some stupid video. She promised to have the video’s maker arrested and punished.

To the face of a dead man’s mother. To her face. To his sister.

Cold, calculated, uncaring. Yes, she did.

Hillary had a lot of company in her performance, in the present and in the past.

The President lied about the video. Our President lied to us. He had his reasons — selfish, personal, re-election reasons. But, then, we’ve become anesthetized to his lies, haven’t we?

The President sent out his United Nations Ambassador, Susan Rice, to lie on five news shows on one Sunday morning. Of course, she was rewarded with a promotion to National Security Adviser when it became apparent she was never going to be confirmed as Secretary of State.

The Benghazi hearings, Hillary’s own testimony, and her own emails tell the truth of it.

Why all the lying, Big Red Car?

The lying stems from a very simple fact.

The President was running for re-election on the false meme that Al Qaeda had been “decimated” and its leadership had been “decapitated.”

The facts of Benghazi — 53 days before the election — were uncomfortable as they exposed the lie of his falsehoods.

When our President is uncomfortable, he lies. He likes having handy and reliable liars around him. He lies. They lie. They celebrate together.

It is his comfort zone whether about Obamacare and its provisions or the facts surrounding the catastrophic murder of our Libyan ambassador.

So what do we really know, Big Red Car?

What we know is that Hillary R Clinton is a deadpan, bald faced liar of incredible skill and breadth. Her performance was extraordinary but then she has had years — decades, a lifetime — of experience. She has learned from two masters — Bill and Barack.

We know that our government will piss on the grave of good men who die for their country but whose death is “awkward” when it comes to such matters as re-election.

We know that the Democrats are going to put forth a woman for consideration as their nominee who is ruthless, bloodless, as hard as nails, and very accomplished in bashing the truth to her own purposes.

We know that in this, we are a being led by lesser people than we ever thought.

We know that we failed Ambassador Stephens and then horribly dishonored his life and memory in pursuit of small things, a mean spirited quest for power. Three other good men, also.

I apologize to America for who we have become.

But, hey, what the Hell do I really know anyway? I’m just a Big Red Car. Stay dry today and be good to those you love.