Big Red Car here on a nice sunny ATX day with a bit of a chill in the air. 52F but headed to 80F this afternoon. Ahh, on Earth as it is in the ATX.

So, did you watch the beclowning of the Republican debate last night?

It is difficult to imagine that anyone could have done a more ham handed, amateurish, biased, transparent mash up of what CNBC did last night.

They are, in fact, a bunch of clowns. 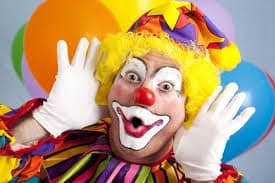 It was an embarrassment to democracy and to minimal political intelligence. The candidates did a good job of calling bullshit on them. Why not?

When a fat guy from New Jersey calls out the commentators for being “rude” — draw you own conclusions.

But, hey, what the Hell do I really know anyway? I’m just a Big Red Car. Be kind to someone today. Even a clown.

32 thoughts on “CNBC — Clowns, Nothing But Clowns”