Big Red Car here in the gray hours before the dawn contemplating the spectacle that was the Democrat debate in Milwaukee last night.

The next primary is in South Carolina, so let’s have a debate in…………………………………………..Milwaukee. How about Columbia, Charleston, Greenville, Myrtle Beach? Huh?

The Big Red Car finds it odd that the progressive banner is being fought over by an ancient 74-year old white man and a vintage 69-year old white woman.

But, there was some interesting observations made which bear acknowledging and commentary.

Bernie took Hillary to task for her having sought foreign affairs advice from Henry Kissinger. Kissinger, of course, was instrumental in the opening of China with President Richard Nixon. Here is Henry the K getting a lesson on using chopsticks from some elderly Chinaman. [Extra credit — who is THAT guy? Haha, you have no idea, do you?] 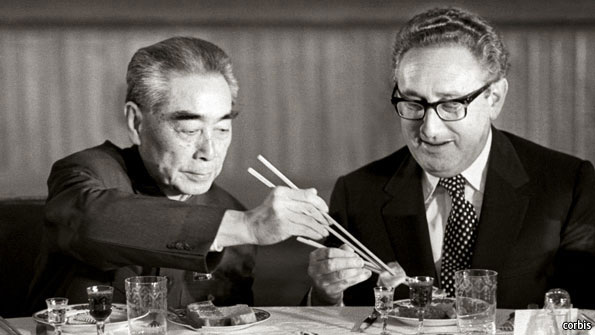 The comment wandered through the history of the tragic end to the Viet Nam War — a war which most young progressives’ parents hardly are old enough to know anything about.

Bernie knew all about the war since he was a Conscientious Objector and thusly avoided service.

He threw Cambodia, Prince/King/Prime Minister Norodom Sihaunok, Pol Pot, the Khmer Rouge, and the 3-5MM people who were slaughtered by the Pol Pot/Khmer Rouge despotism onto the stage.

Blaming it all on Hillary’s guy pal, Kissinger, when, in fact, the genesis of the war was Kennedy and Johnson. Nixon and Kissinger came in during the later innings to clean the mess up.

He took the Cliff Notes version of history to make his point and got a lot of it wrong but he made his point — Hillary is taking advice from some relic from the 1970s.

“Kissinger” even sounds like one of those names one would be attuned easily to be wary of and the guy still speaks with a slight German accent — da, da, da, dum — cue the spooky background music. Vampire music, please?

Had she been on her game, Hillary would have whispered that Henry the K was the guy responsible for prying the post Yom Kippur War Egyptians — walk like an Egyptian, y’all — out of the Russian Bear’s hands and thereby thrusting the Middle East into a long run of Israeli peace.

We could use a splash of that Middle East – Israeli peace just about now, no?

This exchange went over almost everyone’s head who is a Bernie progressive because they hadn’t been born when it all happened. Kissinger, wooooooooo! 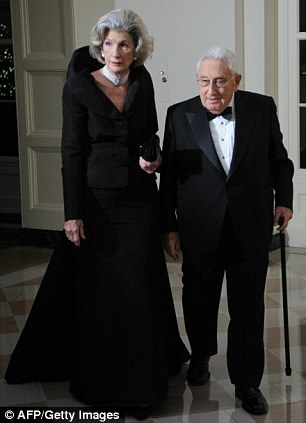 Here is a be-caned Henry Kissinger with his Nancy Alice, a tall woman who has always reminded me of the protagonist in one of those Dalmation movies. You? Henry has a sword in his cane. [Big Red Car made the sword story up, y’all.]

There is something slightly ironic about a Conscientious Objector (Bernie) and a failed Marine recruit (Hillary) vying for the job of Commander-in-Chief of the US military.

Maybe it’s just the Big Red Car but a guy who did his all to say he “couldn’t” serve and a woman who loathes the military seem like unlikely candidates for that job. No?

Could there be any less qualified duo in the history of our country? [You Republicans are just as bad, so shut up and sit down. That’s an order.]

Hillary, who has apparently focus grouped this utterance, has taken up the mantle of being the Third Obama Term. This is a real thing, y’all. I heard her say it and she never lies, y’all. Never.

A truly stupid utterance in the opinion of the Big Red Car harkening back to when the President famously said during the 2014 mid-term election: “My policies are on the ballot.”

Whereupon the electorate bitch smacked the Democrats handing a barbed wire enema to 11 of 12 incumbent Democrat Senators vying for re-election and in the process giving the Republicans the Senate, a bigger majority in the House, and a slew of governorships and statehouses.

The worst such beat down since the 1920s. And this woman wants to invoke The Third Obama Term? She’s supposed to be the smart Clinton, right?

Hillary pointed out that Bernie had, in fact, criticized President Obama on his last NCAA Final Four picks to which Bernie — on his game, y’all — replied: “You ran against the man, Hillary!”

In case you missed it, they are both nibbling at the edges of Obamacare saying, “Something a little stinky about Obamacare, y’all. Trust us, we’re going to fix it. Trust us!”

So much for the President’s signature turd floating in the health care punchbowl, no?

Anybody who runs with the Obamacare tee shirt on is fucked. Mark the word of a Big Red Car!

Don’t believe a Big Red Car, believe the eleven Senators who lost their jobs over it.

One area in which there was universal agreement was that both of these candidates are willing to admit they intend “to tax the living shit out of everyone.”

You have to admire and respect that brutal honesty. It makes it infinitely easier for the poor addlepated electorate — vote for either of these two and you can be assured one one thing — YOUR TAXES ARE GOING UP. In the words of Dick Cheney, “Big time!”

So, there you have it, Ancient v Vintage in a cage match in Milwaukee, Wisconsin. Early night as they both like to get to bed early enough to get their sleep.

You progressive, particularly your Millenials, know this — there is nobody on this planet looking after y’all like a 74-year old ancient white guy or a 69-year old vintage white chica. You, Millenials, are screwed.

But, then, it is our vote. Use it wisely.

What would Henry Kissinger do?

But, hey, what the Hell do I really know anyway? I’m just a Big Red Car. Be good to yourself cause these old farts are not going to be able to remember who you are.