Big Red Car here in the aftermath of the Republican debate in Greenville, SC last night with some observations.

First, it was a Saturday night, the prelude to Valentine’s Day and one could feel the love in the air. I am betting that Donald Trump and his Melania are probably enjoying a nice brunch down in Charleston with Jeb and his bride right now. Think so?

The country needs to understand something and that something is called NASCAR and how it relates to politics. 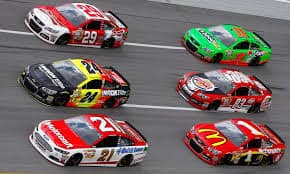 South Carolina is the South, the old Confederate South wherein the Civil War was started with the poorly thought out shelling of Fort Sumter in Charleston Harbor. [Who knew Lincoln was going to take it so poorly? It was just some good old boys letting off a little steam and nobody even got hurt.]

South Carolina has Columbia, Charleston, Greenville, and Myrtle Beach. That’s the Low Country and all that great seafood, the Midlands with the Capitol and the University of South Carolina, the Uplands with Greenville/Spartanburg where they make Mercedes and BMWs and used to make textiles, and the Beach where they dance the shag.

Everywhere in South Carolina they have NASCAR. NASCAR is the South, Confederate flags, Rebel yells, and what poses for “normal” at racetracks like Darlington, SC. Go to Darlington Raceway’s website and look at the advertisers. It’s middle America.

Look at the advertisers on the individual cars (which are really just moving billboards when you get down to it). What do they know that you don’t? They understand NASCAR.

NASCAR is really all about the wrecks, y’all. Not the races, the wrecks first and, only then, the races. Like Rob’t Duvall said to Tom Cruise in Days of Thunder, “Rubbing is racing.” 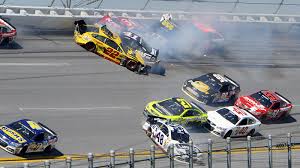 That Republican debate last night was a NASCAR wreck on a stage pretending to be politics or it was politics at the NASCAR level. There was a lot of rubbing going on, y’all. You may have even noticed this yourself.

The debate quickly produced the requisite wreck and likely Donald Trump emerged as the guy who started the wreck and emerged unscathed. The bad boy tapping into all that nationwide anger. Who better to create a wreck?

South Carolina is not the GOPe or preppies who went to Princeton undergrad and Harvard for law school. They love George W Bush but it’s because he’s a spoiled frat boy with whom they’d like to have sixteen beers and talk shit about NASCAR and eat Low Country seafood and barbecue and fried chicken.

So, know this, if you think that NASCAR crowd hasn’t heard every form of profanity or doesn’t like to see a food fight, think again. They love that shit the same way they love seeing a damn good wreck and that, dear readers, is the Darlington Raceway God’s awful truth of the matter.

Oh, you can stroll along King Street down in the city with all those damn churches and you can go put on airs at the fine restaurants on Queen Street but those boys in their seersucker blazers and their pink slacks with their fine looking, tanned women, even they love NASCAR. They also love their politics in the same  manner — with a weather eye turned toward seeing a good wreck.

On next Saturday, remember who told you this.

But, hey, what the Hell do I really know anyway, I’m just a Big Red Car? Be kind to all old red cars, y’all. Please tell that freakin’ Boss to get me a new paint job. Please.