Anonymous sources — what does that mean, Big Red Car?

Big Red Car here in the gray before dawn waiting for its brain (electronic ignition) to wake up. Might need some hot 10W40?

So, today, dear reader, we talk of a dinosaur which no longer roams the earth — journalism.

Journalism was that respected profession through which we earthlings were informed of goings on near and far. Journalists wrote reliable utterances and you could count on their accuracy because they held the imprimatur of such venerable institutions as The New York Times or The Washington Post. [Note the reverence which the Big Red Car visits upon these publications by using the word “The” to precede their names. Very impressive, Big Red Car.]

Alas, these “institutions” are now crack dens extensions of the People’s Democrat Party. Unfair, some may say as they have long since ceased to be followers and are now leaders. They are not reporters of news; they are manufacturers of news. They do not follow the direction of their masters; they lead the way.

Ask yourself if you can find a single conservative or Republican amongst the staffs of those once great papers. Unicorns? How can there be balance when there is no balance?

President Trump and the Russians

As we all know, the Trump candidacy was supported by the Russians. In fact, President Trump’s opponent lays the blame for her defeat at the feet of the Russians who, apparently, advised her to blow off the Rust Belt. They devised her losing strategy. I get that.

The discussion took place in the White House. 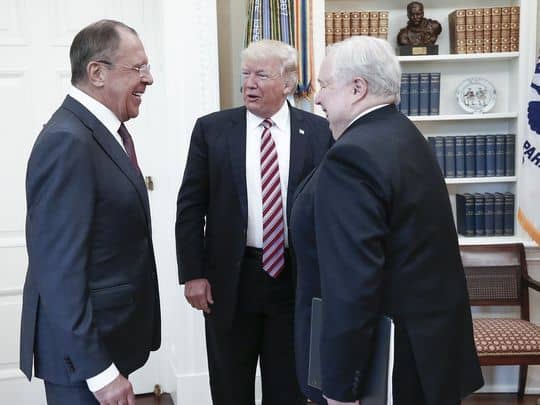 Hey, Foreign Minister Lavrov, tell the Ambassador to lay off the borscht. Son of a bitch hasn’t missed a meal in a long time.  No RESET BUTTON for you. Haha. OK, let me tell you some classified secrets: “Hillary says you cost her the election. What do you have to say about that?”

They drank Russian tea and American coffee. <<< I have this from a reliable source who works in the White House kitchen and whose uncle used to date Madonna.

They discussed matters of such gravity that some of them were CLASSIFIED. [Cue the ominous background music, please.]

This doesn’t trouble you, dear reader, because you harken back to when President Truman met at Yalta with Stalin and President Truman said, “Hey, Stalin, I have a new fangled weapon called an atomic bomb. I’m going to drop a couple of these on those Japs. Look for them. It’s going to be huuuuuuuuuuuuuuuge. Hey, pal, this shit is CLASSIFIED. Do not tell anyone.”

So, you get it that when nations discuss world matters, they are going to be discussing CLASSIFIED information. You get that right?

The Washington Post and The New York Times both wrote articles “reporting” that President Trump discussed CLASSIFIED material with the Russians. They are troubled by that notion though Captain Obvious tried to tell them, “When countries meet at the highest levels, they always discussed classified info. Think about it.”

There were only a handful of folks at the meeting. Note the list above. None of those folks talked to the papers. All of them said the reports in the Post and Times are false. ALL OF THEM DENY THE ACCURACY OF THE POST AND TIMES REPORTS.

The Post and the Times identify their sources as “anonymous sources close to the President.” Huh? Could it be the busboy whose uncle used to date Madonna? Or who went to a Cher concert in 1972?

So, on one side you have the President, the Russian Foreign Minister and Ambassador, a retired four-star Marine General, and a retired three-star Army General.

On the other side, you have “anonymous sources close to the President” even though there was nobody else in the freakin’ room.

So, Vladimir Putin, today, offered to provide a transcript of the meeting. This should raise a couple of observations:

Were the Russians recording the convo?

[Tell me you don’t think the President of the United States of America does NOT record every word in the Oval Office. Tell me you’ve read history and know this started after World War II. Tell me you know you can go to the Lyndon Baines Johnson Presidential Library at the University of Texas in Austin By God Texas and LISTEN to his recordings. Tell me you know this. Please. It’s important to me. Sorry.]

Was there an interpreter in the room? [Both the Foreign Minister and the Ambassador speak excellent English.]

So, Putin knows and he says there was no exchange remotely like that “reported” by the Post and Times.

So, who are you going to believe, Big Red Car?

The Washington Post, owned by Jeff Bezos of Amazon, has a spiffy new motto: Democracy Dies in Darkness. You have to love it.

Democracy may die in darkness, indeed, but there is little doubt that The Washington Post is in the “news” manufacturing business with anonymous sources. They just make shit up.

And, you, dear reader, you thought manufacturing was dying in the United States?

But, hey, what the Hell do I really know anyway? I’m just a Big Red Car, but I can smell bullshit from a mile away. Be good to yourself cause you’re such a fine person when you allow all that fineness bubble to the surface.