Big Red Car here.  Bit gray in the ATX but is has warmed up more than a bit.  Like it a bit warm and humid sometimes.  Yeah, right?  The Big Red Car likes it sunny and cooooool.

Speaking of cool, The Boss has been enjoying his new venture into CEO coaching with Voomly.  Here is a report.

Voomly is a great business which connects experts with folks who need a bit of expertise.  The site — www.voomly.com — was founded and is operated by Andy Swan of Louisville, Kentucky.

Andy is a pal of The Boss and he is a successful serial entrepreneur.  He started Voomly some months ago to connect the experts — Vexperts — to the Voomers.

The Boss has a Vexpert page on Voomly here.  <<< link

The Boss delivers his services under The Wisdom of the Campfire brand.

Why does The Boss do this?

The Boss had already been doing a bit of CEO coaching before he got involved with Voomly but frankly he had neither formalized it nor had he marketed it.  He was an adviser to a number of startups and small businesses in much the same way a Boardmember would sit on the Board of Directors of a company.

The Boss does not want the formality, liability or responsibility of being a Boardmember of startups and small companies but he loves working with CEOs young or old to work their company.  Most companies are dealing with growth considerations.  Every CEO needs a genuine and authentic sounding board.

The Boss enjoys it and enjoys the relationship with other CEOs.

What does The Boss bring to the table?

The Boss has been a founder, President, CEO or Director of companies for a third of a century — 33 years — for both public and private companies and has lived through a number of business cycles.  He has some seasoning and experience that can be used by CEOs on a similar journey today.

Think of it as a full or partial tuition scholarship.  The CEOs can tap into the life and business experiences of a seasoned and experienced executive who will represent the interests of the CEO and only the CEO.  The Boss typically only works for the CEO.

A CEO may have a Board of Directors but the simple truth of the matter is that there are many times the CEO cannot and should not confide in a Boardmember.  Remember the CEO is employed at the pleasure of the Board.

He is experienced in dealing with all the leadership and management disciplines and Boards, regulators, financial institutions, investors, legislation, lobbying, litigation and all the things that keep CEOs up at night.

The Boss attacks almost every issue in business from the perspective of understanding the environment, identifying the stakeholders, crafting or documenting a process, modeling the outcomes and then perfecting the process.  He is logical, rational, thoughtful and curious.  He listens and will teach you to fish rather than throw a fish on the table.

One of his most valuable contributions is that he has a number of useful exemplars — documents, flow charts, graphics, policies that he has developed over his career.  Need a workmanlike exemplar of all the necessary ingredients to run a Board meeting?  The Boss has it all.

Here is an exemplar that deals with how a CEO might grow their internal financial capabilities in a lean, nimble and agile environment.  Click on it to see it in a useful scale. 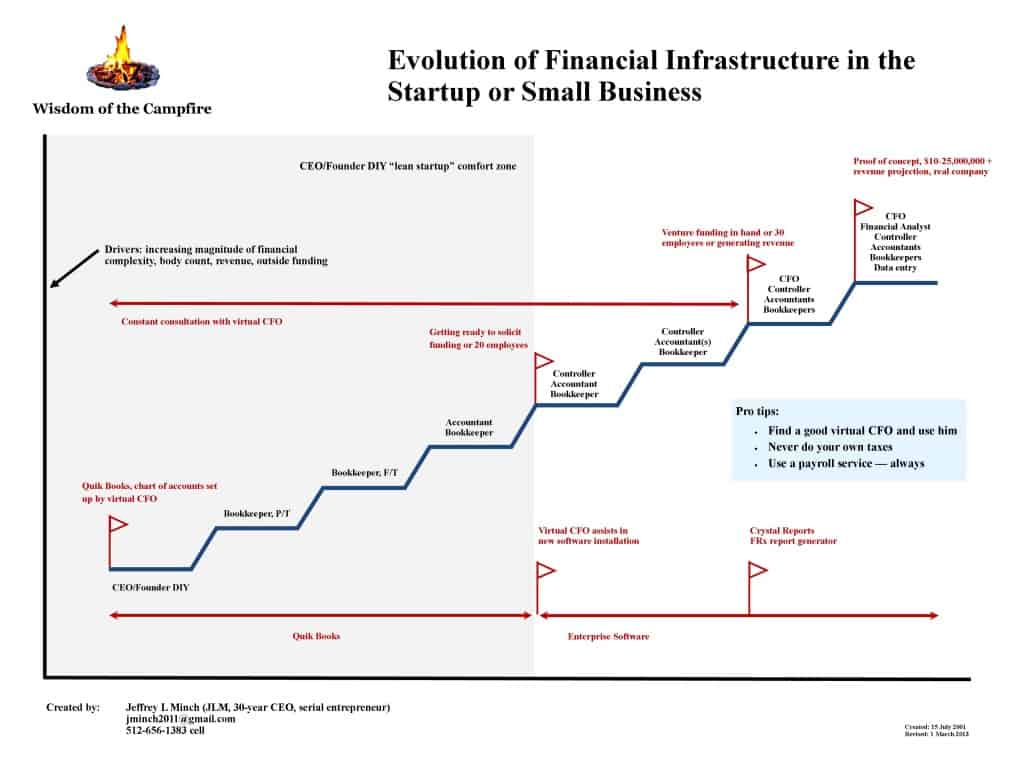 Among both his Voomly and other CEO coaching relationships, The Boss is working with the following types of companies.  This is, of course, highly confidential information as the relationship between a CEO and a CEO coach is always purely confidential.

1.  The Boss is working with a small but established London based property services platform — a business The Boss knows very well having been a developer of high rise office buildings, apartments and warehouses — expand its profitable business into a global enterprise.  The Boss is helping the CEO to evaluate growth strategies and to right size his pricing given the huge value that the enterprise contributes to the overall process.

This is a website evolving into an e-commerce platform while engaging with some of the biggest names in institutional quality commercial real estate.  The CEO is more than equal to the task.

2.  The Boss is working with a very impressive e-commerce platform retailer in a specialized niche but large industry.  The CEO is wrestling with growth issues while also considering a very attractive opportunity to monetize five years of hard work.

The CEO has never sold a company and The Boss is helping him to price, communicate and negotiate the transaction.  This is chess not checkers.

The Boss is also assisting the CEO in evaluating the wisdom of continuing to grow the business and thereby postponing the sale.  Both outcomes are great outcomes.

The company is on the cutting edge in its deployment of sophisticated video in support of its marketing efforts.

3.  The Boss is working with a Canadian technology company which has a highly specialized and technical expertise to support a critical element of other technology service businesses in the communications field.

This closely held company has a complex and precise sales program which The Boss is assisting the CEO in rationalizing.

The delivery of the service is complex and involves cloud hosting and software as a service implications.

4.  The Boss is working with a web based e-commerce platform which is involved with the built environment and which has recently stumbled upon and closed one of the best fitting acquisitions imaginable.

The CEO is shrewd, seasoned and salty and is wrestling with the enormous opportunities this acquisition has unleashed while dealing with life balance type issues.

5.  The Boss is assisting an internationally based CEO who is building a startup business with recent product-market fit and a bit of profit traction while wrestling with melding an emerging and developing culture across the ocean separating a foreign and domestic operational base.

The above companies are all profitable and poised for great things.  The Boss is lucky to be able to work with such impressive CEOs.  He is able to provide immediate value in providing a framework for confronting the pertinent issues while providing a sounding board for the CEO to muse through their concerns.

The Boss also deals with startups who are in the process of developing a working hypothesis of their business.  They may be at the most embryonic phase imaginable.  The entire business is still on paper and they are still grappling with the basic idea.

1.  The Boss is working with a foreign based materials company which is developing a working prototype of a material development process with unlimited potential for disruptive innovation.  The CEO and the company are still in the lab.

2.  The Boss is working with a company which plans to bring a massive disruptive change to an enormous industry which is global in scope and which provides the opportunity to dramatically revise the transactional methodology and pricing.  This is the application of current technology to an archaic commercial process.

The following graphic shows how one might approach this challenge.

There is some other great “free stuff” under the Free Stuff tab on this website.  Get some.

3.  The Boss is working with a company which has already achieved product-market fit and more than a bit of traction in the financial services industry and which seeks to deliver its product to individual and enterprise level users through complicated channels.

Is this fun yet?

In every instance, The Boss has identified CEOs with whom it is a pleasure to work.  In addition, it is important for The Boss and the CEO to have more than a bit of chemistry.

It is The Boss’s job to help the CEOs get to solutions that really work.  And sometimes, to talk them down off the ledge.

So, if you need some help.  Consider calling or emailing The Boss or take a look at the Voomly website and make contact there.  The Boss cannot bite you through the phone.

The Boss says he will repaint me with the money he makes consulting with CEOs.  I believe him.  And, ya’ll, I am starting to need a good paint job.