Big Red Car here.  Oh boy, it’s going to be 75F and sunny here in the ATX today.  Oh boy!  [Hey, Big Red Car, STFU because other folks live in places like Chicago and it’s wicked cold there.  Actually it’s going to be quite nice in Chicago today.]

So The Boss is still in Steamboat Springs skiing.  It snowed like mad yesterday and last night.  Probably got more than a foot of fresh powder.  They were out grooming it all night long.

This is what the grooming effort looked like from The Boss’s porch looking down toward the gondola.  Kind of dark — hey it was 4:00 AM.  Those bright double lights  above the equipment are guiding the groomer to see the slope right in front of The Boss’s place.  The other lights are the ski base area.  Going to be some sweet skiing today. 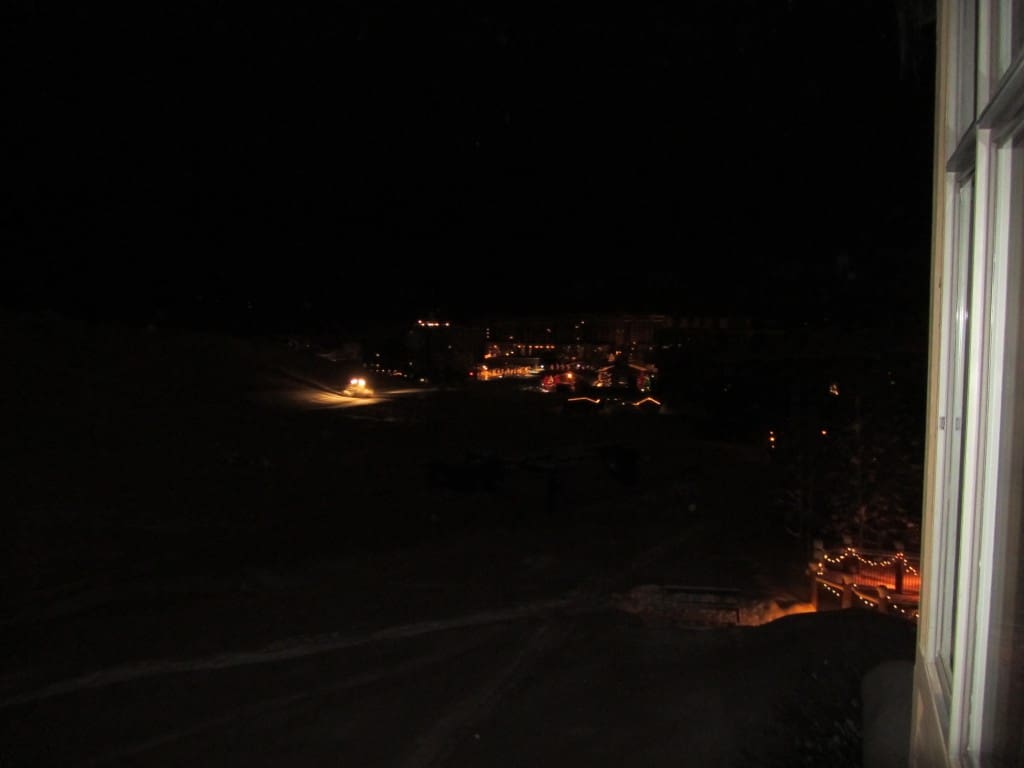 So The Boss has been reading Douglas Southall Freeman’s “Washington” which is a seven volume set — Pulitzer Prize winner — which is the definitive history of the man who is probably most responsible for the United States getting out of the cradle.

The Continentals — and their militia brothers — were tired, starving, ill equipped and had no quarters to shield them from the harsh winter.  It was a very tough time for the American army.  It almost failed that winter because soldiers cannot survive with no food and shelter and warm clothing.  It was a disaster.  Men were deserting, bit of mutiny the air, nobody re-enlisting.  A very tough time.

Washington went to work to change the situation.  All good CEOs are agents for change.  They identify the crisis issues and they solve them one by one.

Every crisis is a call to action.  The first thing Washington did was to turn the troops loose to fell trees, create building logs and to construct huts. 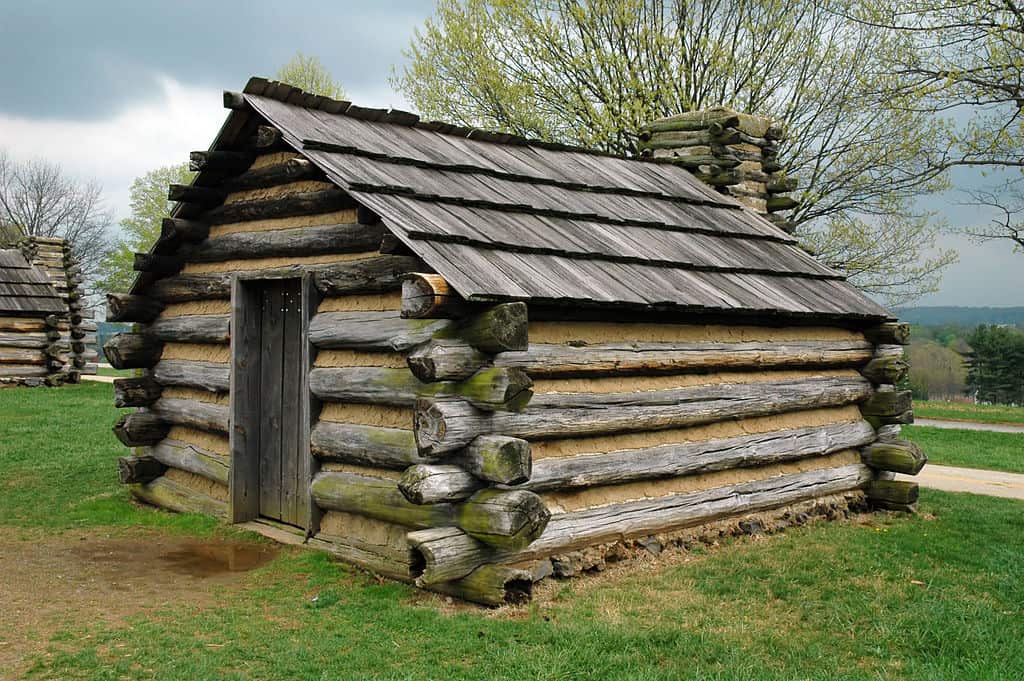 Approximately 2,000 of these huts were built within three weeks using a single axe per hut.  It took a squad of men about 3 days to build such a hut.  The huts were constructed of log walls with mud chinking, a log floor (many had dirt floors), cedar shake roofs and a fireplace.

Washington petitioned the Continental Congress to provide adequate food, clothing, shoes and blankets.  The Congress was not very forthcoming and Washington hit them between the eyes making some of them come to the encampment to ensure they knew exactly the conditions their inadequate supply efforts had created for the Army.

Washington, who was also the victim of a cabal — the Conway Cabal — seeking his replacement while trying to shelter and feed his army said the following to the Continental Congress:

“I can assure those Gentlemen that it is a much easier and less distressing thing to draw remonstrances in a comfortable room by a good fire side than to occupy a cold bleak hill and sleep under frost and Snow without Cloaths or Blankets; however, although they seem to have little feeling for the naked, and distressed Soldier, I feel superabundantly for them, and from my Soul pity those miseries, [which], it is neither in my power to relieve or prevent.”

Washington dug in and went to work.  Slowly things began to get better.  Slowly food was provided.  Clothing and shoes were provided.

Take just a second to ponder how well YOU might have survived or fought in those conditions without shoes, warm clothes, a blanket or food.  Could you have continued to march when it was your bloody footprints in the snow?

The Boss served in elite Army units but always had good supply and cold weather gear.  The American Army has a tradition of being very well supplied.  Perhaps it comes from this horrific winter at Valley Forge.

Here at this critical junction in time, Washington was facing massive desertions, a potential mutiny, intrigue amongst his officers and, yet, he kept a cool head and worked through each issue by delegating skillfully to men who had actually been soldiers — rather than staff officers — who understood what these shortcomings meant to the combat efficiency of units.

Washington, like a startup CEO, was hard working, thoughtful, patient, resolute, persistent and ticked off each challenge one by one.  In the meantime, he also recruited new soldiers for our all suffering Army.  It was Washington’s personal efforts which provided the glue that kept our fledgling nation and army together in the face of this enormous and shattering adversity.

As Washington began to solve the potentially fatal problems he began to do other things also.  The most important was that he used the time in winter quarters to train the army in basic military discipline and battle drill.  He availed himself of the skills and efforts of Baron Friedrich Wilhelm von Steuben.  Von Steuben, a Prussian, was a professional soldier who had served on the general staff of Frederick the Great of Prussia.  He showed up in Valley Forge looking for work with a letter of introduction from Benjamin Franklin.

Washington and von Steuben hit it off and their relationship was a critical element in Washington’s overcoming the challenges of Valley Forge.

Von Steuben was a skillful trainer and undertook to train the Continentals from squads to brigades on military discipline and battle drill.  Discipline is the core of an army.  When the bullets begin to fly this discipline will provide the energy for troops to follow their leaders.  To fight and win.

Battle drill provides the standard operating procedures for what combat units do when they come in contact with the enemy.  Perhaps one unit pins down the enemy’s front through direct fire and another turns the enemy’s flank through maneuver.  Perhaps artillery is called forward and gives the enemy a bit of grape shot while the infantry maneuvers clear of the gun target line.

Army officers are essentially trainers.  The Boss, when serving as a combat engineer officer in several different line units, was constantly engaged in designing training programs, organizing training, conducting training and assessing training readiness.  On more than one occasion, The Boss trained combat engineer companies from squad level to company skills in everything from basic soldier skills, infantry tactics, demolitions, fortifications, road building and river crossings.  Two units he commanded made 100% on their ARTEP annual tests.

Washington used the time in winter quarters to train his army by skillfully using the experience and knowledge of von Steuben.  In later years, this training allowed the Continentals to stand toe to toe with the British Army — then the best in the world — and defeat them. 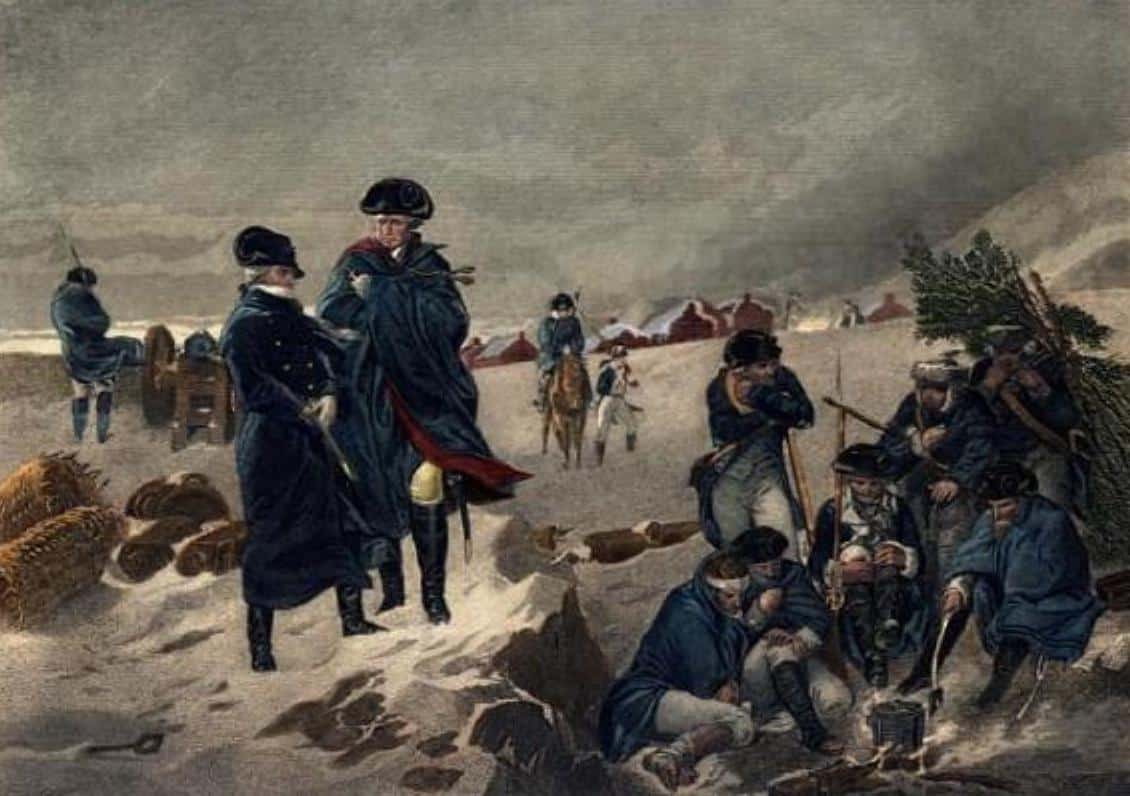 This opportunity was created by the nature of the crisis.  Crisis provides opportunity to overcome weaknesses and to develop strengths.  This is true whether you are George Washington or a startup CEO.

The Boss marvels at the magnitude of the crushing challenges that Washington overcame.  His crisis of that winter at Valley Forge was overcoming his military adversaries, re-building his army, developing his officer corps, recruiting, caring for his wounded, being a good steward of his soldiers, training for the spring and summer offensives and overcoming the Conway Cabal.  When one looks at what Washington did in that winter of crisis the only reaction can be WOW!

As a startup CEO, here are some things that WILL happen to you:

1.  You will face a gut wrenching crisis which will threaten your very survival.

2.  Everyone will be looking at you to solve the problem, brilliant startup CEO.

3.  The crisis will require you to work harder than you have ever contemplated.

4.  It will be solved iteratively — one step at a time.

5.  The crisis will be a great opportunity to build a better company — overcome weaknesses and develop extraordinary strengths.

Oh, one more thing, brilliant startup CEO.  A bit of prayer is not a bad idea. 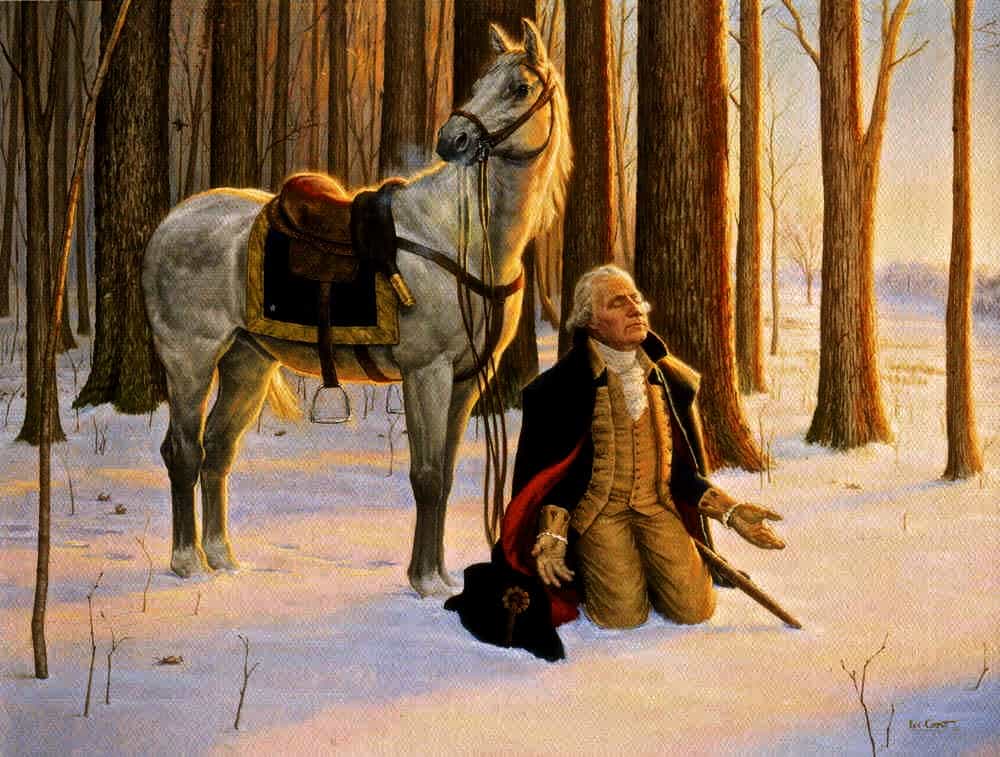 Now listen carefully.  This is who we Americans are — a people whose Nation was forged at places like Valley Forge by men like George Washington.  This is the DNA of our country and it is the blood that flows in your veins.  This is the unconquerable American entrepreneurial spirit.  This is YOU, brilliant startup CEO.  This is you.  George Washington and the Continentals paid your dues at Valley Forge in that winter of 1777-78.  Now return the favor and go bite the ass off a bear and build a great company.