Trump-Romney interview? How did you get the transcript, Big Red Car?

OK, so the Big Red Car has magical powers and can sometimes channel stuff that others can’t. This past weekend, the Big Red Car tapped into the smoke detector system in Bedminister, NJ at the Trump Global Golf Course and listened in on President Trump’s convo with Mitt Romney.

Donald meets Mitt at the door of his luxurious, old, white guy, red-bricked country club and they have one of those awkward handshakes — the kind you’d expect when you’ve called a man a “fake” or a “con man” or a “choke artist” or a “loser.” Awkward, awkward, awkward. 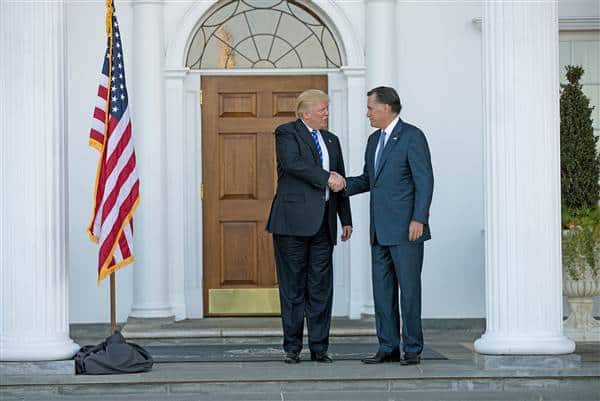 “And you, Mr. President-elect. Congratulations again on your victory.”

They enter and walk toward a great room — all rooms which house The Donald these days are “great.” This is a particularly great room with chandeliers and a fireplace and coffee service on a sideboard. Mitt gets a cup of coffee (looks at The Donald while contemplating a splash of bourbon, but passes) and they sit.

“Yes, winning. You should try it sometime, Mitt. It’s addictive. In a good way. You know I don’t drink, right?”

The fellows sit directly under a required smoke detector (my source for this convo, damn good smoke detector, GREAT smoke detector) on a couple of generous couches (these are both big, strong, old, country club, white men) perfectly situated on an antique Persian carpet (acquired before the Iran nuke deal, mind you) in front of an enormous fireplace.

“So, Mitt, would you like to be my Secretary of State?” asks The Donald.

No preliminaries, right to the main event. Direct. Brash. Ballsy. The President-elect was suited and power blue tied, leaning back with his legs crossed comfortably. Head back appraisingly, looking down at his prey like a wolf. The leader of the wolf pack. Taking his time and enjoying the moment.

“I’d love to serve the country in any way you think might be useful, Mr. President-elect. So, yes, I’d love to be Secretary of State.”

Mitt spat the words out like a machine gun (currently banned by the Feds) and was leaning forward in that flop-sweat-sheen job interview pose which makes your underwear — even your “special” underwear — ride up a bit and bunch up creating a mortal wedgie. Left to its own devices, it will eventually strangle you. He likely couldn’t marshal enough spit to wet a postage stamp. Still, he smiled and pressed on in his earnest, square manner.

The Donald starts laughing and Mitt (good sport that he is) joins in. The Donald’s laughter fills the room, echoes back, and slaps Mitt a second time before being sucked into the fireplace and out the chimney. It, the laughter, has a life force of its own and had been relishing and building toward this moment since the night when Mitt called to congratulate The Donald.

“OK, Mr. President-elect, good one. I suspected you were just having me up here to jerk my chain. Good one.”

“Come on, Mittens, you knew I was going to do that. Wasn’t that fun?”

“Yeah, I guess I deserved that. Can I apologize and make it all better?”

“You couldn’t make it better, Mittens, if you pushed a peanut down Pennsylvania Avenue with your nose while naked.”

“I was afraid of that, Mr. President-elect. We done here, sir?”

“Yes, Mr. President-elect, it is catchy.”

“Catchy? I won the election with that. #MAGA. Made a bundle on the hats, Mitt. God, the people bought them big league. Huge profits. And the variations — safe, proud. Endless variations. Genius. Mitt, do you think I’m a genius?”

“I think you have the best native political instincts of any person in American politics today.”

“Yes, Mr. President-elect, I did. Ann worked with me and I did practice it.”

The men made small talk about Utah and the vote there and how Mitt’s tired, GOPe intervention was ineffectual and then the allotted time had passed.

“Mitt, let’s go show the press how tight we’ve become and tell them I’m giving  you serious consideration to be my Secretary of State.”

The Donald was overcome with laughter again and this time, Mitt joined in right away. When they looked at each other, they began to laugh even harder. By the end, they were in each other’s arms to prevent their falling. It was a very special moment. It flirted with cruelty and then returned to the sweetness they both sought, the healing. Because, after all, this was all about healing and coming together.

At the door, they shook hands for the cameras with The Donald on the landing and Mitt Romney on the lower step to establish who was the Alpha Male Pack Leader and who had been taken to the woodshed. It was theater. Mitt Romney gave an Oscar-worthy performance. Then, it was over and The Donald returned to his GREAT room.

Kellyanne Conway had been listening in on the intercom and she found The Donald when he returned to the fireplace.

“I think that went well, sir,” she said.

“Yes, I enjoyed that. Winning, Kellyanne, it makes everything right. It solves all your problems. I’m going to teach this country what it means to win and win and win.”

On the way back to the airport in Newark, Mitt called his wife, Ann. 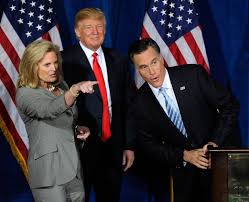 A picture from when The Donald endorsed Mitt Romney’s losing effort to win the presidency. When Mitt needed The Donald’s $$$$$$$$$$$$$$$$$$$$$ and before he turned on him like a rabid dog. Hyperbole!

He didn’t have the heart to tell her what really happened.

“We had a very productive conversation, dear. I don’t know for sure where this leads but I have a feeling that the son-of-a-bitch is actually going to Make America Great Again.”

“Get home, Mitt. Right now. He’s an uncouth barbarian and you’re too good to join his ugly administration. Don’t you start.”

And, that, dear reader, is how it went down. I swear to you.

But, hey, what the Hell do I really know anyway? I’m just a Big Red Car and I am NOT going to be Secretary of State either. Too damn much travel. But if I wanted the job …