Big Red Car here in the great ATX on a cloudy day. But it is Texas and On Earth Like It Is In Texas, no?

So, the Big Red Car is an advocate of term limits and the poster child for it is Senator John McCain.

Senator John McCain (Ariz-Republican) is 80 years old and has already been a Senator for 30 years.

[BTW, he is not the oldest Senator, that distinction belongs to Dianne Feinstein at 83; or, the longest serving Senator, a distinction which belongs to Patrick Leahy — headed to 48 years of service. I picked him because he is ostensibly a Republican.] 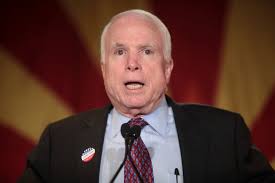 Just re-elected, he will have served 36 years when he finishes this term.

He recently stated he intends to seek re-election when this term ends, thereby seeking to serve a total of 42 years and serving until he is 92 years old.

The Big Red Car supports term limits as a way to break the control of the elites on our political system.

Senator John McCain is a professional politician and will never relinquish his control and power. Ever.

How about we limit Senators to two terms of six years each?

How about we limit Representatives to four terms of two years each?

But, hey, what the Hell do I really know anyway? I’m just a Big Red Car and I’ve been around for half a century but I never served seven terms in the Senate. Be good to yourself but let’s get some damn term limits, shall we?