In less than 46 hours, we will have a peaceful transition of power as Joe Biden becomes the 46th President of the United States.

He will be my President. I will not riot, demonstrate, conduct a coup, cry, wail, march up and down the street with a sign that says “Not My President”, and I will not demand his impeachment today — or, likely, ever. Not my style.

I will extend to him every courtesy of his high and difficult office as if I were interfacing with the entire 80MM persons who put him there. I will be respectful also to the 75MM Americans who did not want him. I will be a respectful, adult Big Red Car.

I have prayed that God grant him the grace to deal well with his momentous duties. I will continue to pray for him.

Today, I learned of a policy initiative which President-elect Biden intends to put into practice immediately upon taking office.

What is the Keystone XL Pipeline, Big Red Car?

The Keystone XL Pipeline is a 1,179 mile pipeline to carry 830,000 barrels a day of tar sands oil from Canada to the refineries in Houston and Port Arthur, Texas. It is a BFD. 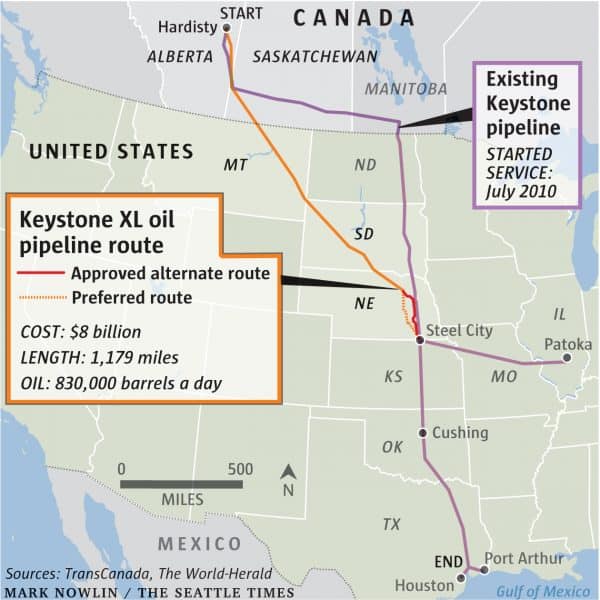 It is a very big deal in the US – Canada relationship.

1. The Keystone XL Pipeline started in 2008, sponsored by a venture of TransCanada Corporation and ConocoPhillips. TCC would ultimately buy out CP and become TC Corp.

2. After dicking around with it, it was rejected by Pres Obama in 2012 — meaning he denied it the necessary cross border permit.

3. TC, in 2015, goes forward with the portion of the project from Cushing, Oklahoma to the Gulf Coast as that does not cross an international border and thus does not require Federal approval.

6. Trump is elected to office and grants TC a permit to build the Keystone XL Pipeline in 2017.

7. Joe Biden announces during the campaign he will cancel the cross-border permit granted by the Trump admin and says he will do it on the first day of his presidency, which is Wednesday.

What is the status of the Keystone XL Pipeline construction, Big Red Car?

The cross border pipeline is built.

There are a number pumping stations in the United States that are built.

Much of the Canadian section of the Keystone XL Pipeline is built.

Ahh, allow me to count the ways:

1. It is a sop to the environmental Illuminati. This one is for AOC and the Squad. This is the spoils system writ large. It is just partisan, winner-take-all politics as usual. This is NOT what unity looks like.

How you boys like that shit, motherfuckers? Plenty more where that came from. Just getting started with you assholes. Play on.

2. President-elect Biden neglected to discuss the sich with Canada, who is understandably miffed. This is not a sound approach to foreign relations.

3. The arbitrary cancellation of a huge construction contract is anti-business, anti-energy, anti-jobs, and bad for the US economy.

There will, of course, be a huge lawsuit. Count on it.

4. The alternative to “ethically” produced crude from our own continent is to import “unethical” crude from the Middle East or other locations.

5. This will cost jobs for Americans.

6. This is a threat to future American energy independence which gives power to oil producers in the Middle East from whom we were weaned.

This makes the Middle East “strategically significant” to American interests and conveys power to the Iranians who can interfere with shipments through the Straits of Hormuz.

7. The price of American gas is likely to go up significantly which is the equivalent of a tax hike for everybody. “Hello, five dollar gasoline?”

So, dear reader there you have it.

Joe Biden will be my President on Wednesday and already he has stepped up to bad policy. The decision to cancel the Keystone XL Pipeline is a bad policy decision.

The knee jerk, no consultation with Canada, first day move is an insult to our country and Canada. Just bad policy and bad process.