Russia is led by a guy who can run a bluff of gargantuan proportions. The guy is Vladimir Putin who is a former KGB punk. Make no mistake, Russia = Putin. He is the shot caller over there.

The West is falling for his mojo and the West doesn’t have the cojones to front this punk up in places like Crimea.

He stole Crimea because the West was led by that pussy President Obama. [Sorry, that was uncouth. Please accept my apology.] Turns out the Russians aren’t fazed by faux red lines, speeches, pronouncements they are “on the wrong side of history,” being denied access to Disneyland, and stuff like that. Go figure! 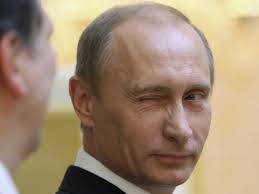 Sure I’m a punk, but who’s going to do anything about it? You, you fat living intellectuals? Haha. I own Crimea and I have my eyes set on the Ukraine. I intend to bluff you until somebody over there grows some sack.

Let’s be clear — Putin has been on the scene in a position of power for 15 years and he isn’t going anywhere any time soon. He will be in power in ten years. Bet on it.

Of late, President Donald J Trump has been calling out NATO members for failing to meet their agreed upon defense spending commitment of 2% of GDP.  What does that mean, Big Red Car?

US defense spent 3.291% of GDP in 2016. [These numbers come from the World Bank while the numbers in the following graph come from NATO. Not sure why there is a discrepancy other than the World Bank numbers are for 2016 and the NATO numbers may be from 2015?]

Here is what happened in NATO. 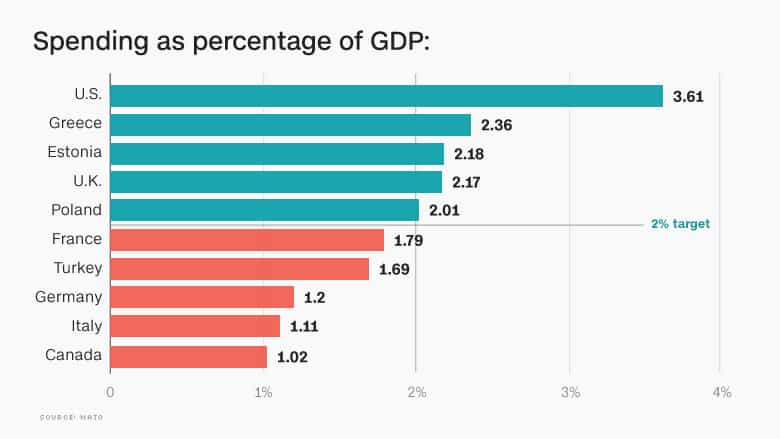 As you can see, there is a lean list of folks who are actually meeting their NATO 2% requirement, but not one of these countries has indicated they do not intend to invoke Article V — “an attack on one is an attack on all” — which is enshrined in the same agreement.

Europe and the European Union has been sending the bill for their defense to the United States since 1945. We are allowing them to grow their economies with the funds they should be spending on THEIR OWN DEFENSE.

This is unfair to the American taxpayer and has to stop. Now.

Russia is tiny. It gets more than half of its GDP from energy. We can drive energy prices down and crush Russia.

The USSR failed because President Ronald Reagan broke their bank by ramping up defense spending. The Russians could not pay the tab. Down comes the Berlin Wall, poof goes the USSR.

To keep the Russians at bay, the West has to work together, meet their financial obligations, and provide an organized resistance to the Russians. This is easy pickings when one considers the size of the West v the Russians.

If the NATO countries met their 2% requirement, that would be $324 BILLION (Russia is at $70 BILLION).

The US will continue to spent about $600 BILLION.

BTW, China is spending about $215 BILLION annually and is expanding.

Read this also: The Russian Bear is a Punk <<< hyperlink

So, dear readers, there you have it. The world is sending the bill for its defense to the United States of America. If they meet their NATO requirements, this is not a big problem, but they are not and this is why it’s good to have an American President who has gotten our national cojones out of storage, no?

One other thing I want to mention is that the US under the Trump administration has begun to export LNG (liquid natural gas) to Eastern Europe which is, currently, held hostage to Russian controlled pipelines which have a chilling impact on Eastern Europe’s willingness to front Russia up during the winter. This new export program is great for the US and Europe while giving Russia a long overdue wedgie.

But, hey, what the Hell do I really know anyway? I’m just a Big Red Car. Be good to yourself. It’s going to be a scorcher out there this week.

11 thoughts on “Russia — The Bear Who Shat in the Woods?”