Performance appraisal in small to medium companies (including startups) is one of those things that CEOs equate to going to the dentist. Not only do they not like it, they are not good at it.

There are a lot of very odd ideas at play here in the performance appraisal business — 360 degree appraisals which also fold in the guy selling flowers on the street corner — which makes the process a moving target; moving targets are notoriously hard to hit.

The message I bring you today is that a suspiciously simple, well-designed and executed performance appraisal system can be the most powerful personal tool wielded by a keen CEO for inspiration and motivation of individual team members.

It can also be clean, streamlined, and painless.

Let’s take a quick look at where performance appraisal fits within the overall schema of a company’s organizational matrix. Click on the graphic to see it at a larger scale. 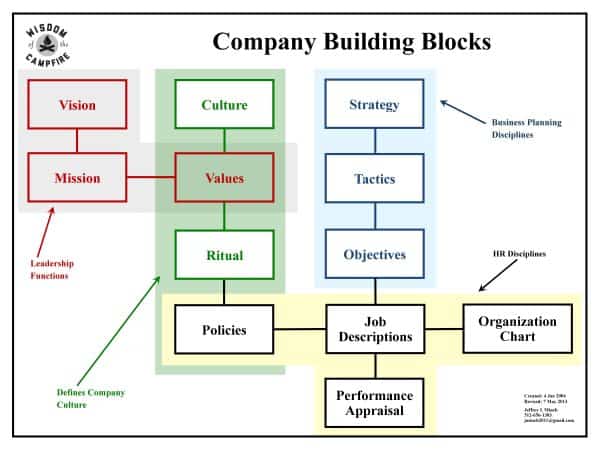 What I want you to see is that performance appraisal is at the foundation level of the company’s Vision, Mission, Strategy Tactics, Objectives, Values, and Culture.

I would even suggest that without a sound performance appraisal system, the company cannot really measure its performance at the strategic, tactical, and individual level.

An adroit CEO will see performance appraisal as the instant in time whereat the CEO can inject inspiration and motivation — like an intravenous injection — into the individual team member.

You have to see it not as a chore, but as an opportunity. This is a difference in CEO attitude v the trip to the dentist.

This attitude re-alignment is the inflection point. It is small, but real.

What this requires — in addition to the change of attitude — is a focused effort to provide real feedback that truly evaluates performance. Here are some ideas how to do that:

1. Make damn sure you and your team member are talking about the same job. Review and update the job description.

I cannot tell you how many CEOs have admitted that the three-year-old job description is so far out of date as to be indecipherable. First test is often — where is the job description?

See, just like that we have already made progress.

2. Make the performance appraisal about performance — review objectives assigned and their completion.

Pro tip: You best team member will have 10 objectives. He/she will have accomplished 6/10. Two of the objectives will be works in progress and 2/10 will be abandoned as they were dopey to start with, became irrelevant, were subsumed in something else, or died some other natural or unnatural death.

In 33 years of CEO-ing of public and private companies and 8 years of CEO advising, this is what I learned at full tuition. It is yours for free.

3. After a good, fair, binary run through the objectives (meaning either accomplished or not) — compare performance to peer groups.

In comparing to peers use the following descriptors:

If “inferior to peers” then the employee has to come up with a plan to improve performance. It also has other implications. Wait on it.

4. Do the exact same thing with a comparison not to company peers, but the industry at large. This is a slight variation on the theme, but it can be important because it is a measure of your expectations v the world writ large.

Consider the dispassionate possibility that your company itself could be equal to, superior to, inferior to the industry. Not everyone can be the special in Special Forces including your company.

5. Force yourself to answer the tough questions:

Can this team member be expected to be promoted in the next 90 days? <<< this is one of the best motivators in the history of motivation

Can this team member be expected to be promoted in the next 12 months?

Can this team member be expected to be fired in the next 90 days? <<< “inferior to peers”

Can this team member be expected to be fired in the next 12 months? <<<“inferior to peers” — see how this works?

These are hard questions that CEOs do not like to ask. That is what makes them so valuable. Most everything in life that is good, is hard.

One of the three best employees I ever had was a man who I told could expect to be fired in the next 90 days. He tracked with “inferior to peers.”

His response when confronted with that harsh assessment was an immediate and dramatic improvement in performance such that he became a super star. It took that action to get that reaction.

6. Every team member has to have a personal plan for development that can be as easy as taking a course, reading some professional book, but it has to be part of the performance appraisal. You have to keep score on this.

This is the homework, the personal development, the visit to the gym that builds business muscle on the team member’s own time.

This is also a way to measure the passion for excellence. One of the best employees I ever had used to steal books I had read and write me book reports. They were very good book reports and we had some lively discussions thereafter.

7. Compensation has to be dealt with at the same time as performance appraisal so that performance becomes the Pavlovian response to compensation.

Compensation done at a later date loses the connection to performance.

Compensation has to be configured in the following manner:

Something special — something tailored solely to that team member such as a company vehicle, a company paid seminar, an accommodation such as WFH on Fridays

Pro tip: You will be surprised at the things that will motivate a team member that may be alien or foreign to your own state of being — because we can be clueless and disconnected. I once gave a person a large SUV as a company car rather than a sleek, more sporty vehicle because that person had five kids and his wife used it to haul the kids in the SUV on the weekends. It was a used Suburban with 30,000 miles that played like a ten carat, flawless diamond. Keep your eyes open.

In another instance, I had someone similarly situated with kids who had to travel out of state for a week twice per month. I nudged him to take his kids and wife during Spring Break and stay for two weeks. It cost me a little more for the rooms, but it played like an all expenses trip to Hawaii. Be creative.

8. Make the team member tell you how they think they did. You may uncover a huge discrepancy as to self-appraisal. This is important to know.

The team member sees himself taking root in the C-suite and you have him pegged to be packing his stuff. In every such situation, referring back to objective attainment closes the perception gap.

9. When someone does a great job for you, give them a gift certificate to a restaurant in an amount large enough for him/her and a spouse.

Why? Because they will then tell their spouse what a great performance appraisal they received and that you recognize their value to the company.

As can see, it is not that hard to do, but it will take work and time.

I used to do all my performance appraisals between Christmas and New Years which made them feel a lot more conclusive. I would come in around 4-5:00 AM, work for as long as I could until I got cross eyed and do the actual appraisals during the first week of the New Year. I would make all comp decisions pegged to 1 Jan New Year. It made things quite orderly for the team and me.

[Admission: Some years my game was not as sharp as others. It happens.]

So, dear reader, there you have it — performance appraisal as inspiration and motivation. It is not a huge difference compared to what you are currently doing (I hope). I promise it will pay dividends.

But, hey, what the Hell do I really know anyway? I’m just a Big Red Car. Have a damn good weekend and call somebody who needs a chat. Be the candle that lights the fire of goodness in your neck of the woods.