So, the President is in Hiroshima becoming the first sitting US President to visit Hiroshima whereat the United States unleashed the power of a new weapon, a nuclear bomb called “Little Boy” which was delivered by a B-29 bomber on 6 August 1945.

On 15 August 1945, the Japanese surrendered entering into a formal surrender on the USS Missouri (one of the refloated ships sunk at Pearl Harbor by the Japs) on 2 September 1945.

The war the Japs started was finally over.

Before the bomb on Hiroshima was dropped, the Allies were making final plans for the invasion of the Japanese home islands, anticipating more than 1,000,000 casualties. Having just captured Okinawa, the Allies were expecting similar fierce resistance which, essentially, consumed almost all of the forces committed to the Okinawa battle.

President Truman made the decision to bomb Hiroshima and Nagasaki (dropped on 15 August 1945) hoping to provide the impetus for the Japanese to give up the war they had started with their unprovoked bombing of Pearl Harbor on 7 December 1941. On that date, there were no nuclear weapons on the face of the world.

Through the Manhattan Project, America’s top secret, crash development program, the US acquired nuclear weapons and made two different types — the Little Boy (Hiroshima) and the Fat Boy (Nagasaki). At that instant, only the US had nuclear weapons.

Immediately after the dropping of the Hiroshima weapon, President Harry S Truman famously called for the Japanese to surrender, warning them the alternative was, “a rain of ruin from the air, the like of which has never been seen on this earth.”

The Japs did not heed Truman’s warning.

When the Japanese failed to respond, Truman authorized the 15 August 1945 bombing of Nagasaki which finally motivated the Japs to surrender. 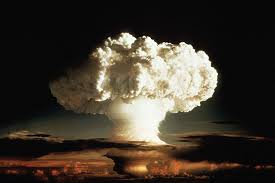 Numbers on the total casualties at Hiroshima and Nagasaki are a little vague but many folks will consider that 250,000 were killed including 20 British, Dutch, and US POWs.

It would not be unfair to suggest the Hiroshima and Nagasaki casualties were the final repayment for the Jap’s bombing of Pearl Harbor which launched the Pacific War with the United States.

The peaceful, sleeping American tiger was blasted out of its lethargy and ended the war by unleashing its might in two flashes that changed the world forever.

Japan may rightfully claim its role as the instigator of the war which led to the creation of nuclear weapons and its own destruction.

What did we learn?

Hiroshima and Nagasaki were an effective alternative to the Allies incurring 1,000,000 casualties to attain the same outcome — unconditional surrender of the Japs.

We also learned the immense power of nuclear weapons and went on a binge of development that continues to this day.

It is a curse on mankind when one considers the sheer financial magnitude of war, in general, and nuclear arsenals, in particular.

It is a waste of money of gargantuan proportions.

The Nobel Prize folk have been whispering about how they want their ill-awarded Nobel Peace Prize back. Fair?

President Obama has famously called for the abolition of nuclear weapons in Prague in 2009. Many considered it to be a naive and silly speech. Not much has changed since then. Let me state, unequivocally, the Big Red Car favors a world without nuclear weapons. On that sentiment, we shall agree — me and our President. On most other things, not so much.

Unfortunately, the President has authorized a trillion dollar — $1,000,000,000,000 — spending program to upgrade the American nuclear arsenal.

Yes, our Nobel Peace Prize laureate President is the largest nuclear proliferator on the planet. I am not saying I disagree with this, I am only pointing out the sheer hypocrisy of a man who delivers yet another speech — in times of crisis, what America needs is another professorial speech — touting the elimination of nuclear weapons from the planet.

Mr. President, you cannot have it both ways. You cannot decry the existence of nuclear weapons while simultaneously initiating a $1,000,000,000,000 expenditure to rebuild the American arsenal. Pick a lane and stay in it?

Read about it here:

Why is this, Big Red Car?

The Obama administration has never really gotten a grasp on nuclear weapons or the folks who own them. [That Iran treaty that gives the Iranians a clear path to a nuclear weapon — that’s the stupidest thing ever done.]

They famously hit the RESET BUTTON with the Russians.

The RESET BUTTON that didn’t work. Note the finger being employed by the Russian resetter. Hillary Clinton’s big triumph.

Yes, that is the same Hillary Rodham Clinton who wants to leverage her failed Secretary of State cabinet post into the White House. In case you are not aware, she is genetically a woman though she had not told us exactly how she “feels” which is way more important these days. [Point of order, the Big Red Car does not and does not anticipate feeling girly. Thought y’all might like to know.]

The message of strength

The message that President Obama should be delivering in Hiroshima is this — “Japan attacked a peaceful United States of America at Pearl Harbor, in one of the greatest feats of cowardly treachery in the history of mankind. Japan’s leaders sentenced their military forces and their citizens to fierce retribution. The Japanese people need to look to their own leaders to account for the 250,000 dead here at Hiroshima and Nagasaki. When attacked, America will defend itself. Let this lesson be known to all.”

President Obama is the ultimate hypocrite — a man whose words and actions do not match.