The more subtle one is the situation in Syria.

Syria, Big Red Car, what is this all about?

Syria is in the midst of a civil war — has been for a long time, enough time to send 250-320,000 people to their graves, wound 1.5MM, and to turn out half of the population as refugees from their homes — in which the countryside is in open rebellion against the regime of Bashar al-Assad, the despot whose family has ruled Syria for a long time.

If you want some background, take a look at this link.

This will provide you with some background but this picture is all that you really need to see. 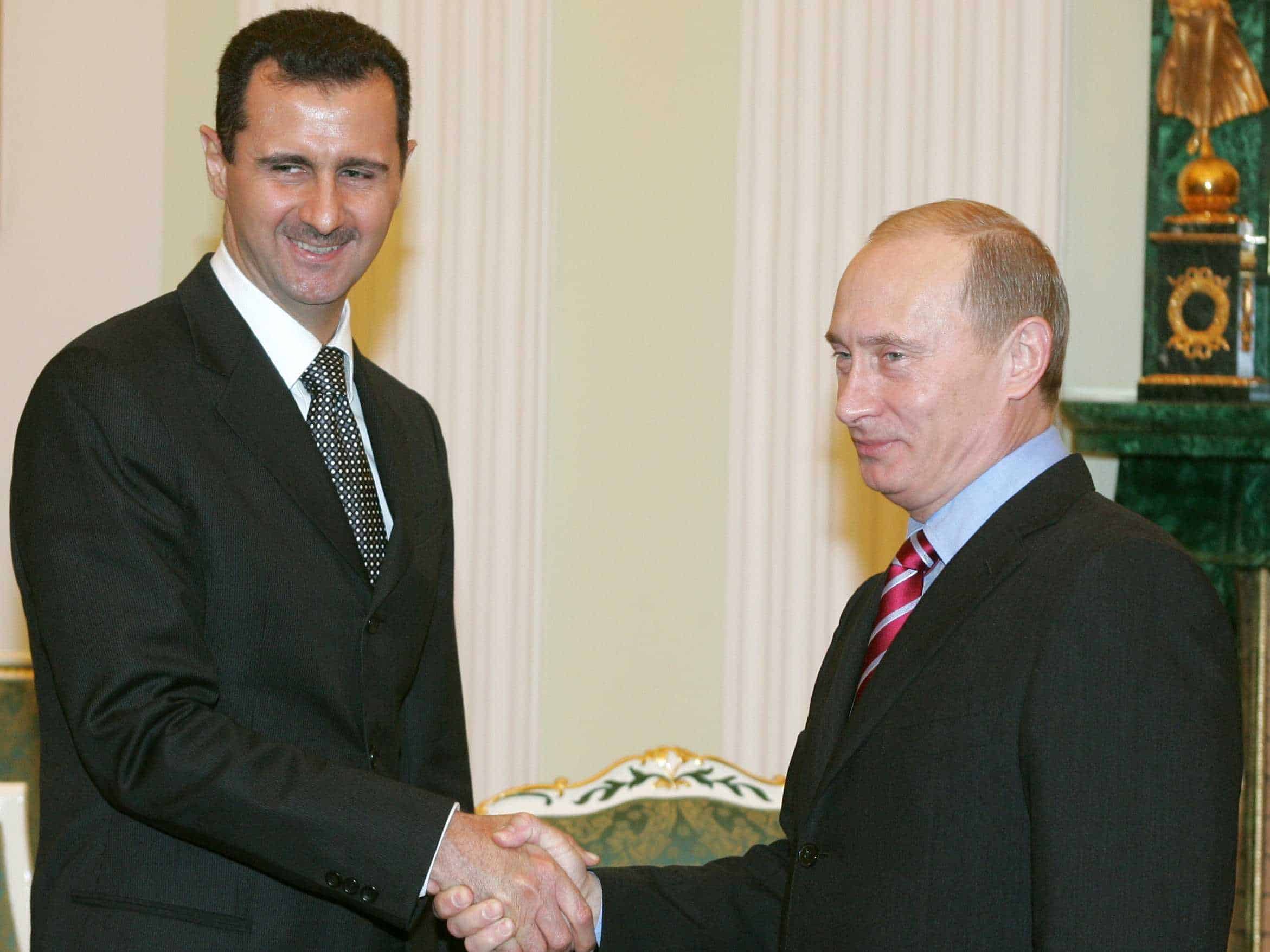 As you can see, Putin and Assad are buddies. Putin is looking at Syria as a way to get back into the Middle East with a client state.

The Russians were famously kicked out by Egypt in 1973 by a master stroke of Henry Kissinger diplomacy. Henry then brought the Egyptians over to the American side which resulted in decades of peace between Egypt and Israel. Henry was very good at what he did.

What is Russia doing in Syria?

Russia wants back into the Middle East and has decided that Syria is going to be their horse. They are providing military support and last week verified they are providing troops, armaments, and anti-aircraft defense.

This admission was buttressed by visible intel from ships passing through the Straits of Bosporus and the Dardanelles. Eyeballs.

Meanwhile the United States is making bomb runs on ISIS and other terrorists units in Syria, in Syrian air space — the same air space the Russian anti-aircraft equipment will be used to control.

The balance of power in Syria

On one side you have the regime of Bashar al-Assad the brutal and despotic leader of Syria whose family has controlled or influenced Syria since participating in a coup in 1963. The Old Man, Hafez al-Assad, took power in 1970 after having been Commander of the Syrian Air Force. He relinquished power to his son in 2000.

The Russians and the Iranians are actively supporting the current despot, Bashar al-Assad, with funding, military equipment, advice, training, and combat troops.

The United States is opposed to the regime and has supported rebels — ineffectively — against the regime starting with groups which morphed into ISIS and other assorted shitheads.

Big point — the Syrian government, the Russians, the Iranians and the Americans are all against ISIS which was the original core opposition group. Note this as it is a very important consideration.

Another big point — the Americans are arrayed against the interests of the Russians and the Iranians and the Syrian government while supporting the truly freshman team of the very suspect Syrian rebels. We got last pick.

They have more potent weapons, a more coherent military force, and the direct assistance of the Russians and the Iranians.

The Russians are already lending direct support in the form of money, weapons, training, and troops. Russian military formations are engaging in direct combat against the rebels, as they exist, in support of the regime.

An important element of that support is anti-air equipment.

Where do we blunder into the Russians, Big Red Car?

We will blunder into the Russians in the sky when the Syrians deploy the Russian anti-aircraft equipment consisting of target acquisition and tracking radar arrays and missiles. American planes will be operating in the air space of a sovereign nation — granted nominally against ISIS targets — and the Syrians (or the Russians themselves) will take a swat at our planes.

The Russians have already warned the United States of this eventuality basing their warning on the lack of direct military contact between the Americans and the Russians as a result of the unpleasantness in the Crimea and the Ukraine.

To refresh your memory, Russia seized the Crimea and is now pressing the Ukraine. There is an Old School World War II type war going on on the eastern border of the Ukraine right now. The US said the Russian conduct was very “third world” and banned them from Disneyland and hasn’t let any of them meet with Mickey Mouse since. The Russians, who adore Mickey, were devastated though they did not offer to return Crimea or to leave the Ukraine alone.

Why can’t we all just get along?

The leaders of the United States and Russia do not get along. President Obama famously “red lined” Syria’s use of chemical weapons and then backed down like a fat kid getting a wedgie from the school yard bully who took his lunch money. Putin argued that there was insufficient proof of Syrian perfidy and the US did nothing after having declared a pinky sworn, double secret, red line curse on everyone. 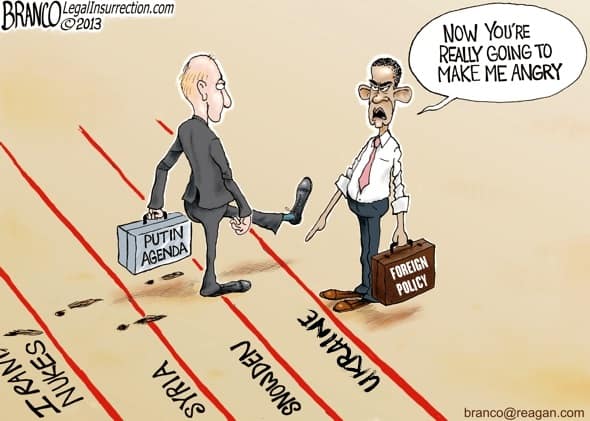 When the Russians stood up and protected al-Assad, the Middle East got the message and the Russians — on the heels of the Crimea and Ukraine — were emboldened hence the presence of combat troops, direct combat, and anti-aircraft defense equipment. The US looked feckless which is how polite folks say emasculated which means ball-less.

Know this, the Russians and Putin correctly surmise that the US is not going to go to war in the Middle East over the Russian support of Syria. If we can’t figure out how to confront ISIS — yes, that strategy is almost done — how can we provide a credible warning to the Russians?

The Russians want to be perceived as good allies at an instant in time when the American eagle is very suspect.

Here is a good overview of Russian intentions.

Russian Warning to US to Butt Out

We caved in on Crimea. We sent bandages to the Ukraine. We let the Iranians bitch smack us publicly. Our ISIS strategy is still a mystery — a mysterious work in progress. We can’t create a credible rebellion against Bashar al-Assad. Libya is a mess. We have lost the Saudis and the Israelis feel betrayed.

Iran, on the other hand, thinks we’re great though they still do chant — DEATH TO AMERICA! Luckily, we know they’re just kidding.

The United States does no have a single tank in Europe to assist NATO and did away with that messy anti-missile defense radar and shield in Poland and the Czech Republic. Why wasn’t Putin grateful for that?

Stay tuned folks, it is going to get dicey very quickly.

Which guy just got the wedgie and had his lunch money taken? 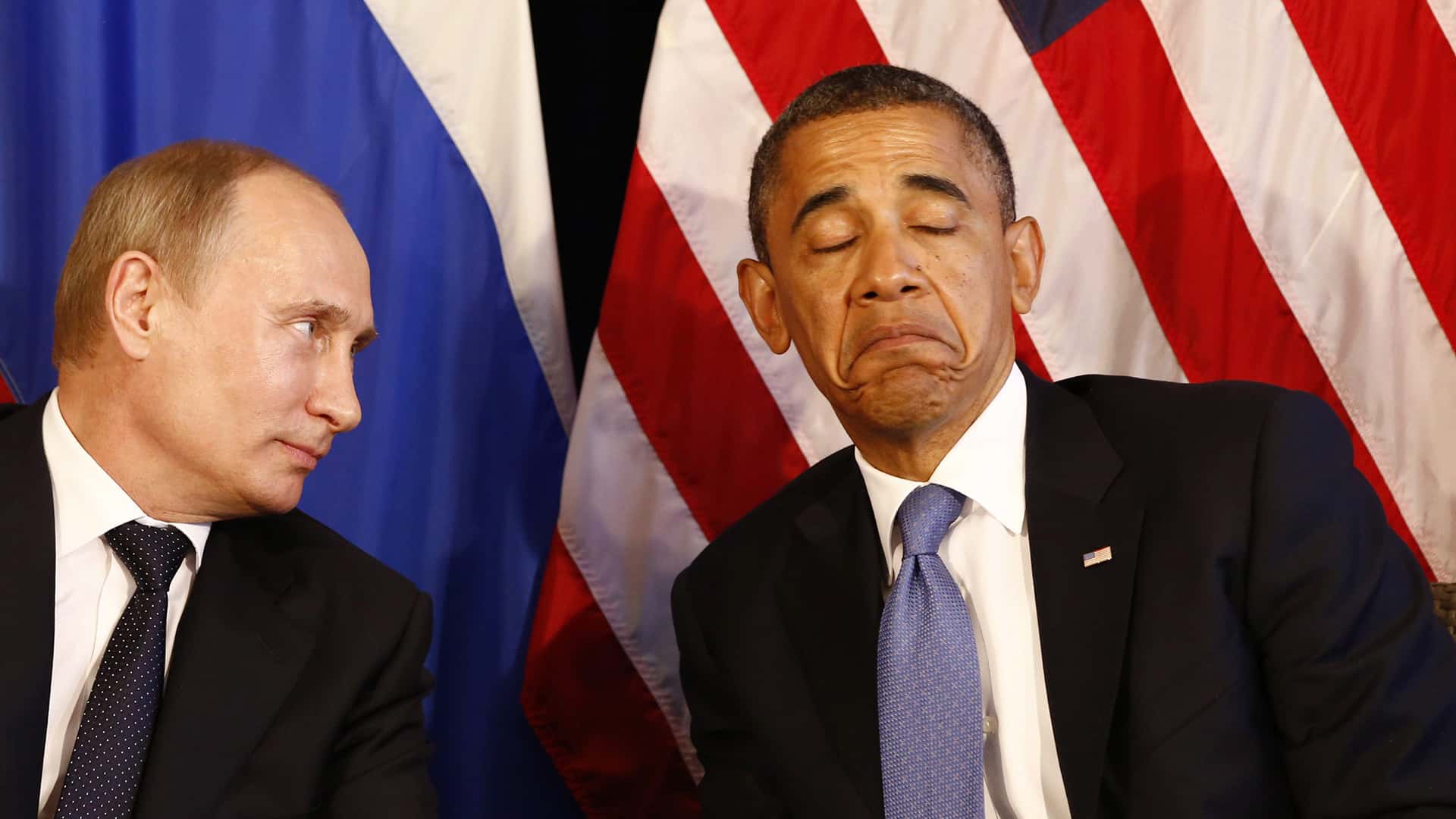 2 thoughts on “Blundering Into War — Syria, the United States, Russia”