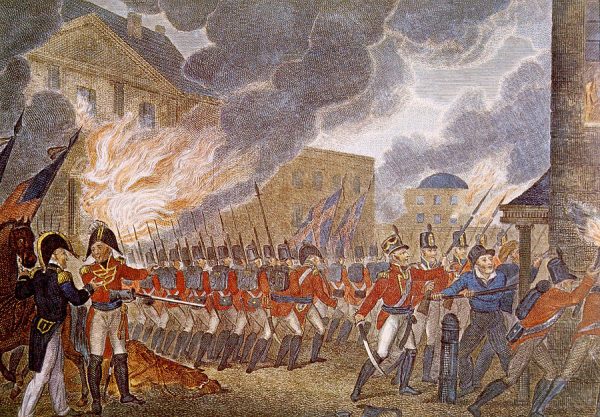 It is worth noting that the Brits had landed from ships at Benedict, Maryland, and fought the Americans in the Battle of Bladensburg (Gen Ross would later be honored as “Ross-of-Bladensburg”) in which 4,250 Brits (professional soldiers all) defeated 7,640 Americans (poorly led militia) thereby laying Washington City open to being sacked — the only time that ever happened.

The Brits justified this burning of the American capital as the Americans had burned York in Canada (modern day Toronto) in 1813 during a highly successful raid.

Oddly, there is a portrait of General Ross in the US Capitol.

The question before us is this — will the nation survive a second sacking of its Capitol?

Get on with it, Big Red Car

By comparison, the recent events were small potatoes. No, the rioters were not “undocumented tourists” nor were they the leading edge of an insurrection. They were just dumbasses.

[Perhaps the Capitol has a special draw for dumbasses? Gratuitous cheap shot.]

What makes it worthy of note is that five people died as a result and that the riot was precipitated by the President of the United States who incited a crowd with a large dose of inflammatory speech which then propelled the crowd to march on the Capitol and engage in the activities that have since been documented.

[I liked — still do — President Trump’s policies. I never looked to him for spiritual guidance nor did I see him as the Pope. I still support his policies. I part with him on the subject of inciting riots. Riots are not policy. I am opposed to riots of all kinds — talking to you, BLM, Antifa, Proud Boys.]

The President, thereafter, attempted to dampen the damage by condemning the violence and calling for calm, but that is like an arsonist who is a member of the local volunteer fire department setting a fire and then arriving to help put it out.

To be clear, your Big Red Car holds President Trump responsible for inciting a riot. All the lead up to it, all the explanations are of no consequence to your Big Red Car. Only the results count.

You incite a riot, you own the consequences.

Yes, dear reader, the same Nancy Pelosi, Speaker of the House, who  could not attend to the business of corona relief for eight months as she feared it might propel President Trump to re-election, intends to impeach President Trump in the next week though the House is out of session until the Inaugurati0n.

Ponder that for a second – be careful, I am diverting your attention here — the Speaker in her exquisite, two-refrigerator kitchen with the enormous treasure trove of $13/pint diverse ice creams could not help the citizens who were devastated by the pandemic, but she can turn over Heaven and Hell to impeach the President for a second time.

Is she looking after you? No. She is settling scores.

Is settling scores why we send persons to Washington to represent our interests?

Well, the why is, of course, because she can. Speaker Pelosi hates Donald J Trump and the feeling is returned.

That hate has brought us four years of pointless investigations, four years of invective, four years of distraction from representing the interests of the American people, and a stillborn nonsensical impeachment with all the theatrical nonsense one can imagine including an official signing with commemorative special pens.

This is an opportunity for Speaker Pelosi to finally destroy her nemesis and she intends to have a go at it. It is very, very, very personal and juvenile all at the same time.

If the President had another year, I’d likely be in favor of his replacement, but that is not what we are dealing with here. They are boxing things up over at the White House. What does this accomplish other than settling a score and wasting time that could be spent serving the American people?

Does she care that the normal affairs of the country will find President Trump becoming “former” President Trump in less than ten days (counting from the next work day for Congress on Monday, 1-11-2021)?

The so what, dear reader, is this — the manner in which the country parts with President Trump, the manner in which we peacefully turn over the Presidency is going to become the glue that binds at least 75,000,000 supporters of Donald J Trump from a fleeting alliance into a “movement” which will celebrate his martyrdom.

Powerful movements are created by martyrdom — talking to you, Christianity, Martin Luther King.

There is no Republican party as it once existed under the benign incompetence of the country club set like the Bushes. No, the Republican party is now the big tent of the muscle workers, the entrepreneurs, the small business owners, all the “have nots” but the ones who are not looking for a handout.

It is the Trump party, not the Republican party. This is the reality of the situation.

The Romney’s, the Sasse’s, the Collins’, the Murkowski’s — are not part of that Trump party and they are never going to be in charge of anything on that scale.

Yes, of course, I am. Here are the the elements of the glue that will cement those bonds:

1. The feckless impeachment of a President who will not have any consequential impact on the country within a week of his departure by natural means.

You might as well paint the Stigmata on the old boy except instead of it being a Gift from God, it will be a gift from Joe Biden and Speaker Nancy.

2. The wholesale nonsense of incoming President-elect Biden referring to Trump’s followers — by analogy — as Nazis. Whoever calls anybody a Nazi always is in the wrong. Sorry.

[Pro tip: Do not evoke a race card wherein no racial element exists and do not attempt reconciliation by calling persons Nazis (deplorables). We are not running the intellectual high hurdles here.]

3. The charade of professing some attempt at unity — a total pipe dream in my view, not a chance of happening — whilst condemning the supporters of the leader of that group.

4. Let’s ban the martyr guy from Twitter, Facebook, and cancel his email accounts while we’re at it.

There is no requirement to be smart to be successful in politics. Use your own example.

However, it is not against the rules to be smart.

But, hey, what the Hell do I really know about anything? I’m just a Big Red Car. 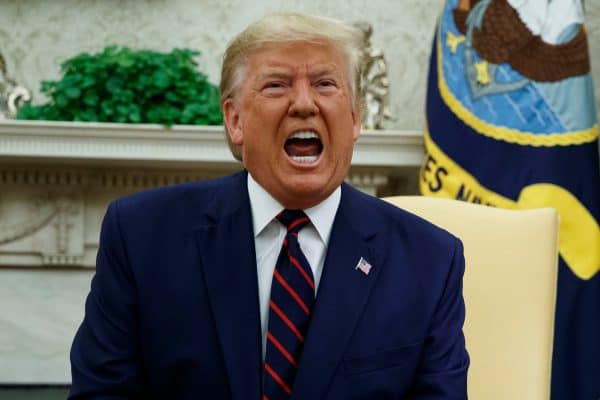 “I will not go quietly into that dark night.” Or, words to that effect.