Ten minutes ago, the Bureau of Labor Statistics released its Producer Price Index numbers for April 2022 – this is, of course, a month in arrears. The print was 11% meaning the cost of final demand goods from producers was up 11% when compared to April 2021.

These are Jimmy Carter numbers.

This is the fifth month in a row in which the annualized increase was double digits — again, when compared to a year earlier.

Here is a link to the actual report:

PPI is a leading indicator of CPI.

“Hold my beer,” said CPI looking at the PPI numbers.

We are in very dangerous territory for the following reasons:

1. We are in the clutches of an upward spiral of price increases and have been since the election of Joe Biden and the initiation of his War on Energy. 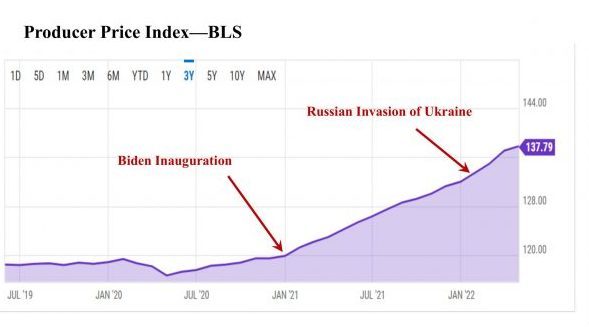 2. The actions taken by the Biden admin that triggered inflation – the War on Energy – are now baked into the cake, pervasive, and there is zero chance they will be repealed.

3. Today, the Biden admin cancelled the latest energy auction for drilling rights in the Gulf of Mexico and Alaska’s Cook Inlet (1MM acres) – this whilst gas prices are at all time highs.

Next time you go to the pump remember that the Biden admin cancelled the latest Federal drilling lease auctions.

When it did resume leases – that is before cancelling the leases noted herein – it increased the Federal royalty payments from 12.5% to 18.75%, an action wildly inflationary on its face.

4. The uncertainty in the energy business – will the Biden admin defend lawfully awarded leases – is keeping the energy companies on the sidelines and will until something changes which will not happen until there is a new occupant in the White House.

5. The Biden admin continues to seek massive spending through the Congress, an action that is tantamount to spraying gasoline on the fire.

Can it be fixed, Big Red Car?

Yes, but it will require action and pain.

The action – return American production to the 13MM bbl/day level that Biden inherited, drive down the cost of crude and, thus, gasoline, and curtail the rate of increase of government spending.

Will it happen, Big Red Car?

Inflation and high prices are hear to stay until there is a change in the White House. Sorry.