Big Red Car here on a cold Austin day. Brrrrrrr! It is in the low 30’s but it will be in the 70’s on Thursday. Let’s just get to Thursday, you hot house thin blooded Texans!

So The Boss gets talking about the art of building teams.

In the course of building teams, not enough attention is paid to individual skills.

If you are going to create a great infantry rifle company, you don’t start with company level tactics or skills. No, you begin with basic individual skills of each rifleman.

In the day, rifle companies were trained to find, fix and kill their enemies. Still are.

They had to be able to find the enemy — usually higher headquarters directed the companies to where the enemy was through their intelligence function.

Only then did they close with the enemy, decisively engage them and destroy them — kill them. They did this through fire and maneuver, achieving fire superiority and then closing with the enemy to dispatch them by direct fire, the bayonet or hand to hand combat.

Here is a picture of The Boss when he was a wee Lieutenant in the Army and a commander of a 450 man combat engineer company. Way overstrength and therefore he trained the crap out of them. That year they made a perfect grade on their ARTEP (Army Training and Evaluation Program annual test). He was about 24 years old and this was his first company. Usually a company was commanded by a Captain and The Boss was pretty sharp so they gave him this company even though he was only a First Lieutenant. 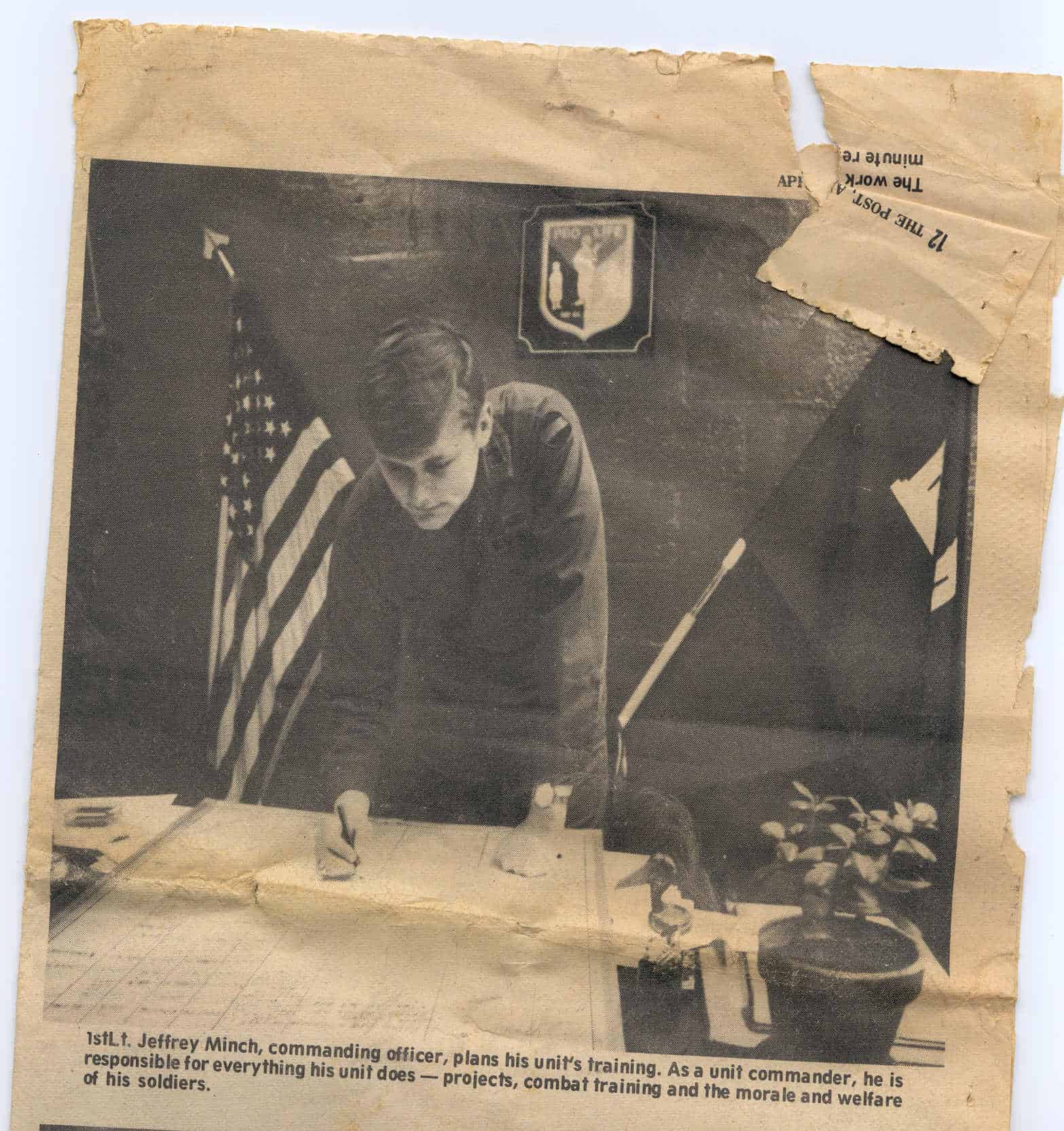 On the right side of the picture you can see a coiled cobra carved out of stone. This was given to The Boss by his men from a unit he commanded overseas. They used to call him the “Cobra” because of something he did once upon a time before he had any sense.

In business, the same methodology should be followed. The wise CEO trains toward this objective by emphasizing individual skills throughout the company.

Each individual in the progressive, aligned business has to know the Vision, Mission, Strategy, Tactics, Objectives, Values and Culture of the company. The first challenge to the CEO is to ensure such documentation exists. If it doesn’t then you are starting from a disadvantage.

This is a”happy” kind of statement and not intended to be taken literally. It is an ideal situation wherein the clarity of the above utterances serves to align the efforts of each individual to do their individual part to contribute to organizational success. A small number of people with their force vectors aligned will ultimately exert more total resultant force than a great number of people whose force vectors are at odds with each other and therefore being squandered on neutralizing each other.

Does this mean the folks need to get a tattoo of the Vision? No.

It does mean that the wise and savvy founder ensures — through spaced repetition communication and training — that the basic glue of the company is constantly reiterated sufficiently that the individual is certain as to the Mission of the company and their role in achieving that objective. This is the power of alignment and it starts with individual skills.

If one were to use a sports analogy — say basketball — it would say that if the operation plan of the team requires rapid ball movement to find the “open” man then the skills of passing and dribbling the basketball would be of paramount importance to the success of the team.

The seeds of failure are similarly sown. If the product the company is producing must be sold in a customer facing B2C environment and you do not have people in your employ who can sell — then this failure to attract, train and retain the right individual skills will spell disaster for the company. It is not the product that is important, it is the product and the value proposition you can put in front of the customer that is important.

In your organizations, pay particular attention to the description, training and evaluation of individual skills as a prelude to executing company level operations.

Sometimes this simple point of emphasis makes all the difference in team performance.

In business, an example of a similar skill that is often overlooked is the power to negotiate effectively. This is a basic business skill and yet businesses do not formally train to do this effectively and successfully.