There is a brand of wisdom that is only found early in the morning at Waffle House. It’s called Waffle House Wisdom. If you don’t recognize that name it is because you may never have eaten at a Waffle House or you are a thin skinned Tesla liberal (the heir apparent to the limousine liberal in the Internet Age) or you are just stupid.

It is impolite to suggest people are stupid but there is enormous evidence to the contrary and a Big Red Car doesn’t like to ignore evidence. You don’t, right?

It — Waffle House Wisdom — is the kind of wisdom that takes its leave by 6:00 AM as it has to report to work with a tool belt on or it is traveling voluntarily to Boston where there are only two seasons — snow season and no-snow season. No snow season is very short and snow season is very long. People in Boston did something to piss Mother Nature off which is never a good idea as she is a vindictive bitch and never knows when enough is enough. But I digress, sorry.

Waffle House Wisdom is the kind  of wisdom that knows that the introduction of 5-10,000,000 low skill, low paid illegal immigrant workers cannot be a good thing for a nation which is struggling with unemployment, declining family incomes and no upward wage pressure. 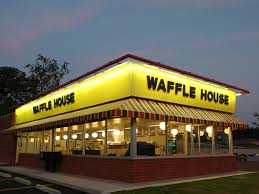 It is the kind of wisdom that eats scrambled eggs with cheese, country ham (well done, please), hash browns with jalapenos, grits (in a separate bowl with lots of butter and salt) and raisin toast (two orders). It eats hearty because it is going to work its ass off that day and it does not count calories which is a blessing because one would quickly run out of fingers and toes even if you borrowed all those of the other Waffle House patrons.

It is not the kind of wisdom that suggests if we give enough stuff away, somebody will eventually want to buy some. It is not into freemium.

It does not ignore poverty in the US while giving foreign aid to Russia.

It does not believe in talking to people who bury children alive, crucify people, behead others (even group beheadings) or burn people to death and video it. No, Waffle House Wisdom says to kill these kind of shitheads, don’t explain it, just kill them. If you feel the urge to explain it, then you are not employing Waffle House Wisdom. Waffle House Wisdom would have the 82nd Airborne Division vacationing in Syria while conducting marksmanship training on ISIS shitheads. They are not red line drawers, they are name takers and heart breakers. You will want to be long tombstones if you are inclined to apply Waffle House Wisdom to the Middle East situation.

Waffle House Wisdom has never infiltrated Harvard though some Harvard folks — never wearing a Harvard tee shirt — do like to eat at Waffle House but not usually before 8:00 AM. They don’t like to tell their Harvard intelligentsia but they love the grits think it’s the secret why many Southern women are so damn good looking and have those sweet honey cured accents.

What does the world require today? Some Waffle House Wisdom!

Please pass the Waffle House Wisdom and can I get a free refill on those grits?

But, hey, what the Hell do I really know anyway? I’m just a Big Red Car and I’ve already been to Waffle House this morning. Careful on the jalapenos.