Big Red Car here in the 66F early morning looking for a few clouds and an 84F high. Ahhh, the last vestiges of winter are very nice in the ATX. [What does beclowning mean, Big Red Car? Forget the weather report, beclowning?]

So, enroute to the morning news shows and then church the Big Red Car is torn by the current nature of the American presidency and the hunt for the next President.

It is only eight months until election day. It is happening, y’all. New President, y’all. Can’t wait!

We are engaged in what can only be described as a circus of a primary season. Netflix is complaining that their viewership is being diverted to the media coverage of the campaign.

Others are just adapting and getting into clown costumes to go with the flow. [Who says Hillary won’t do anything to get elected?] 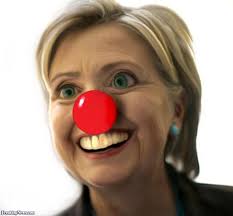 END_OF_DOCUMENT_TOKEN_TO_BE_REPLACED

Big Red Car here.  The Boss is back home and the weather is a bit milder.  No connection.

Boss was in conversation with an old pal of his.   Both interested in politics and got to talking about the sorry state of American foreign policy in the aftermath of the Syrian debacle.