A term not heard much these days in Washington, DC is the term “regular order.”

Regular order refers to the legislative system of the US Congress in which:

1. Proposed legislation, bills, are filed in either the House or Senate,

2. These bills are referred to standing committees;

3. These bills are referred by the committees to their appropriate subcommittees;

4. Subcommittees receive a presentation from their colleagues who sponsored the legislation;

5. The subcommittee discusses the merits and demerits of the bill, takes a vote, and returns it to the committee;

6. The committee, with the recommendation of the subcommittee in hand, calls for public comment and conducts public hearings (you personally can actually go testify at a public hearing);

7. The committee votes and reports out its deliberations to the legislative body of which they are part with its recommendation and vote;

8. The bill is “calendared” for presentation on the floor of the House or Senate;

10. Amendments to the bill are presented, argued, and voted upon;

11. The bill – as amended – receives a vote from the appropriate body – either the Senate or the House;

12. The Senate undertakes the same action on a bill emanating from the House and vice versa; and,

13. If the bill is approved by both the Senate and House — they might iron out any difficulties or disagreements in a “conference committee” – it goes to the POTUS for his approval or veto.

That is how laws are supposed to be made and that is called “regular order.”

So what are we doing, Big Red Car?

Today, what we do is the party with control of either the Senate or House gets together with its favorite bunch of lobbyists – industry lobbyists – and cobbles together a 3,000 page mound of stinky sausage that is unable to be read in a month.

Oddly, these same lobbyists and their industries turn out to be substantial financial backers of certain of these Congress persons — what a coincidence?

Nobody understands it. There are mines and wrapped candies therein. Treats and tricks co-exist. Friends are rewarded and enemies are punished.

The Speaker of the House or the Majority Leader “whips” the bill — obtains support for the legislation – until they have enough votes to pass it over the objection of the party out of power who is not only not consulted, but usually doesn’t even get a copy of the bloody bill until it is time for a vote.

If recalcitrant members do not toe the party line, the Speaker or the Majority Leader “counsels” them, threatens to remove them from committees that do not meet, and to send them wailing and gnashing into the political wilderness.

If that is ineffective, the recalcitrants are summoned to the White House for a chat with the POTUS – in the old days there would be a movie, a burger, popcorn, adult beverages. Today there is just the whipping post.

Sometimes the POTUS comes to the Congress to tell them exactly how he wants the cow to eat this particular cabbage.

Instead, the rulers deal in 2-10 page “outlines” and “frameworks,” but the Devil is in the details and the Devil grades from good to extraordinary in the making of sausage.

The framework says that everybody will have a hard candy Christmas complete with eggnog, nobody will have to pay for anything except for the billionaires – who will put all of their wealth beyond the reach of the tax collectors anyway because they can afford the “best advice” – and corporations.

Today, we have before us the most expensive legislation in the history of the United States coupled with the largest tax increase in US history — and this is exactly how it has been made. Exactly. We do have a 10-page framework. So, sleep easy, dear reader.

This is NOT regular order.

Which brings us to one of the “little things” hidden in the current Build Back Socialist Bill framework – tree equity.

Did you even know that such a concept existed? Tree. Equity. No, you didn’t.

I certainly did not realize that persons were “tree privileged” and “tree underserved.” I just didn’t know.

Not to worry — the Build Back Socialist Bill contains $2,500,000,000 to combat the scourge of tree inequity for underserved neighborhoods. Thank you, Jesus (Joe Biden, Nancy Pelosi, and Chuck Schumer).

Here it is, right from the horse’s mouth: 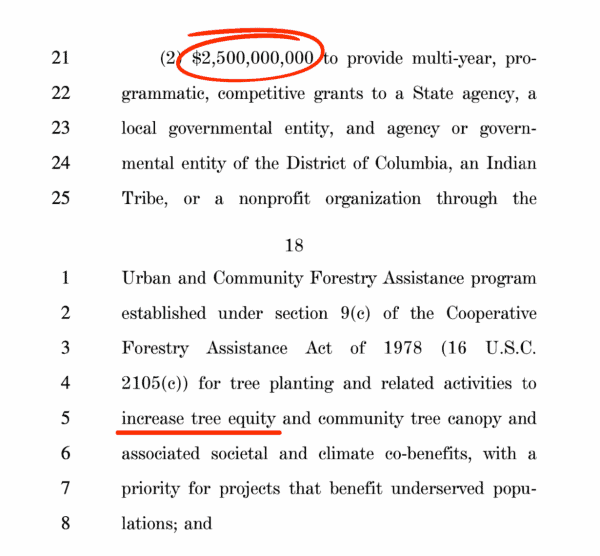 Now, when you pay your taxes, you can look at your spouse or parents and say, “I feel great because I’m funding tree equity.”

Is that it, Big Red Car, tree equity?

Not quite. Here is what will happen IRL (in real life).

This money represents a slush fund for the government to reward their loyal troops.

1. Note that the bill provides for the distribution of the funds through grants to state agencies, local government entities, the District of Columbia, Indian Tribes, and “non-profits.”

Who are these folks? They are the entities loyal to the persons in power. They are the Dem and Blue State brethren who have labored in the trenches to win the White House, the House, and the Senate. This is the spoils system, but funded by y’all.

[Note to self: Found a “non-profit” tree equity company in a blue state. Do this most rickety tick cause there’s an avalanche of funding coming, y’all. Praise the Lord and Nancy Pelosi from who all blessings flow.]

2. In pursuit of “tree equity” they will also be able to fund “associated societal and climate co-benefits,” y’all.

Haha, there it is in black and white. It’s a bloody climate change slush fund. Read what it says.

When the party in power does not follow regular order, we are subjected to a corrupt, rotten way of passing our laws that cannot stand the most basic smell test.

You will not find any of this in the media.

But, hey, what the Hell do I really know anyway? I’m just a Big Red Car looking for a couple of co-founders to launch a “tree equity” startup. Who’s in? There will stock options. So, who’s in? 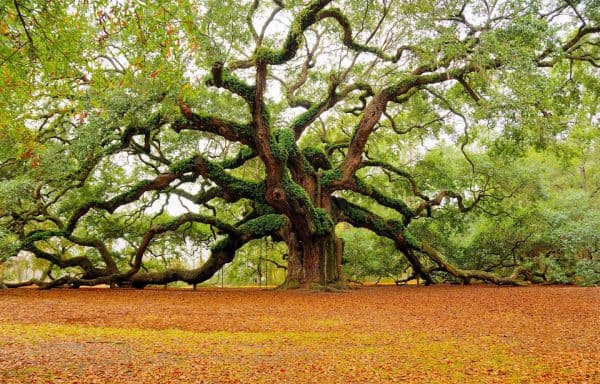 The glorious Angel Oak in South Carolina – this is the tree equity we all deserve, but don’t we already have it? Go visit the Angel Oak.