Big Red Car here on a lovely Saturday morning (actually it’s drizzling). That time of the morning when the leaves in the driveway are scurrying to wherever leaves scurry to running in front of the morning breeze. I like to stretch and yawn and think.

Oh, shit, there is a tech wreck upon us and it is going to be ugly on an ape.

Slow down, Big Red Car, slow down, big fella. It can’t be that bad. Can it?

Two anecdotes don’t make either a trend or a database — haha, I like that sayeth the Big Red Car who is very easily amused.

Be careful and thoughtful when reading this because the Big Red Car is wildly guilty of confirmation bias — the cherry picking of facts which support his thesis while ignoring all facts that don’t. The Big Red Car will be doing a bit of that but the bottom line is this — “I’ve got a very bad feeling, Boss. A very bad feeling.”

Here’s the bottom line — it feels to the Big Red Car like the wheels are getting ready to come off and nobody is watching. The lug nuts on the tech sector seem to be a bit loose though there are a lot of other points of darkness.

1. Nobody is talking about the deficit any more. Last Republican debate — anybody say anything about deficits out to the next millenium?

2. The price of oil has now lost its virginity below $30/barrel and the next stop is going to be $20 and it may not stop there.

3. The tech darlings are getting hammered — oh, yes, forgot to mention so is the rest of the stock market, eh?

4. The chickens are coming home to roost and they are pissed off chickens.

Still, it’s only a feeling. But feelings can be prescient.

Tech darlings which are public — Twitter, Etsy, GoPro — are getting hammered. [Note: Just using random stocks, anecdotal, which do not create a trend or a database.]

You may say they deserve to get hammered given the new yardstick they are being measured by. OK. Still, these deals are turning out to be brutal head fakes. First in the soup is Twitter, only because it is so damn popular. 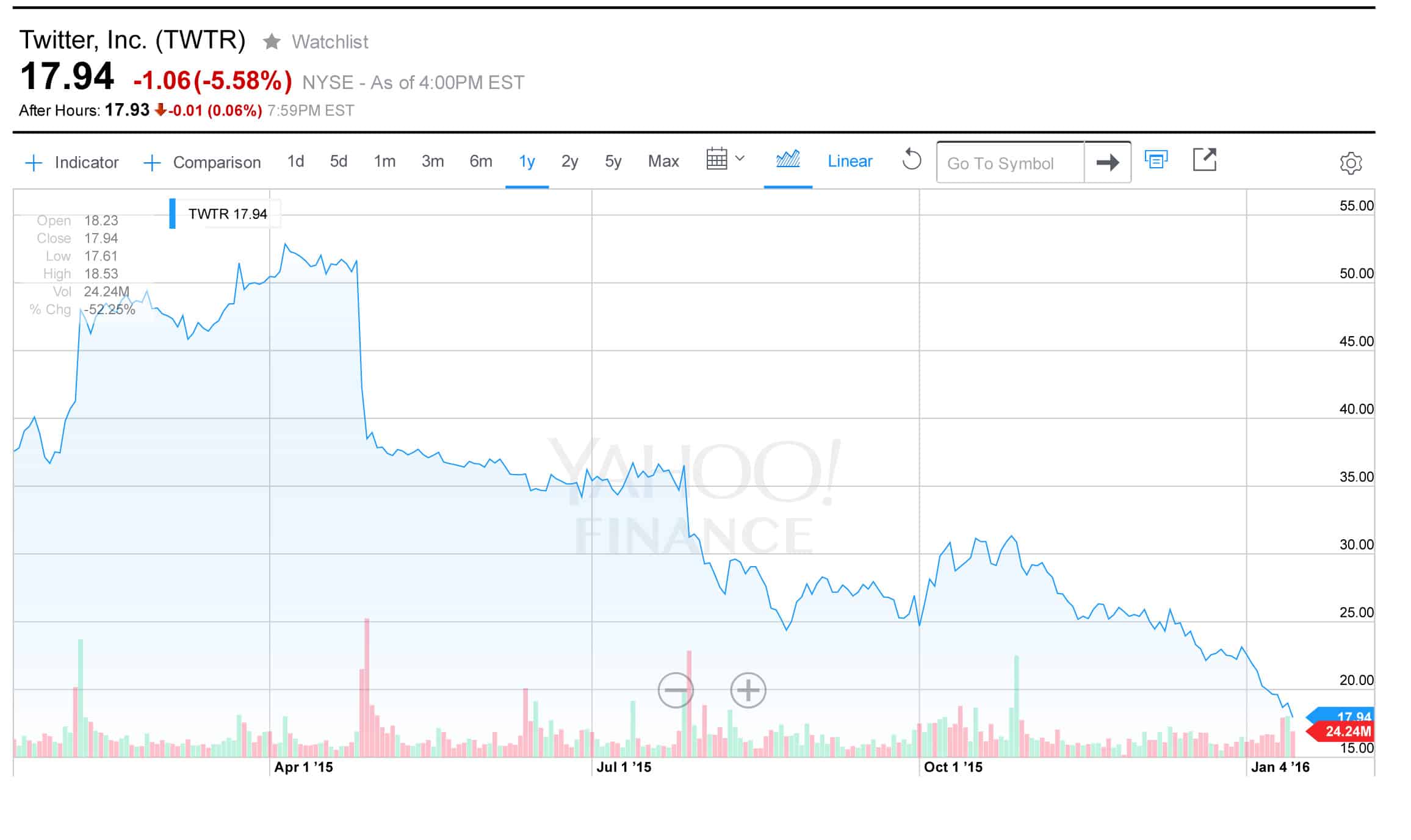 As you can see, the wildly popular TWTR is not a great performer in bed. Ooops, meant on the stock market. It is still very sexy. Next in the soup is GoPro — love those sexy little cameras. 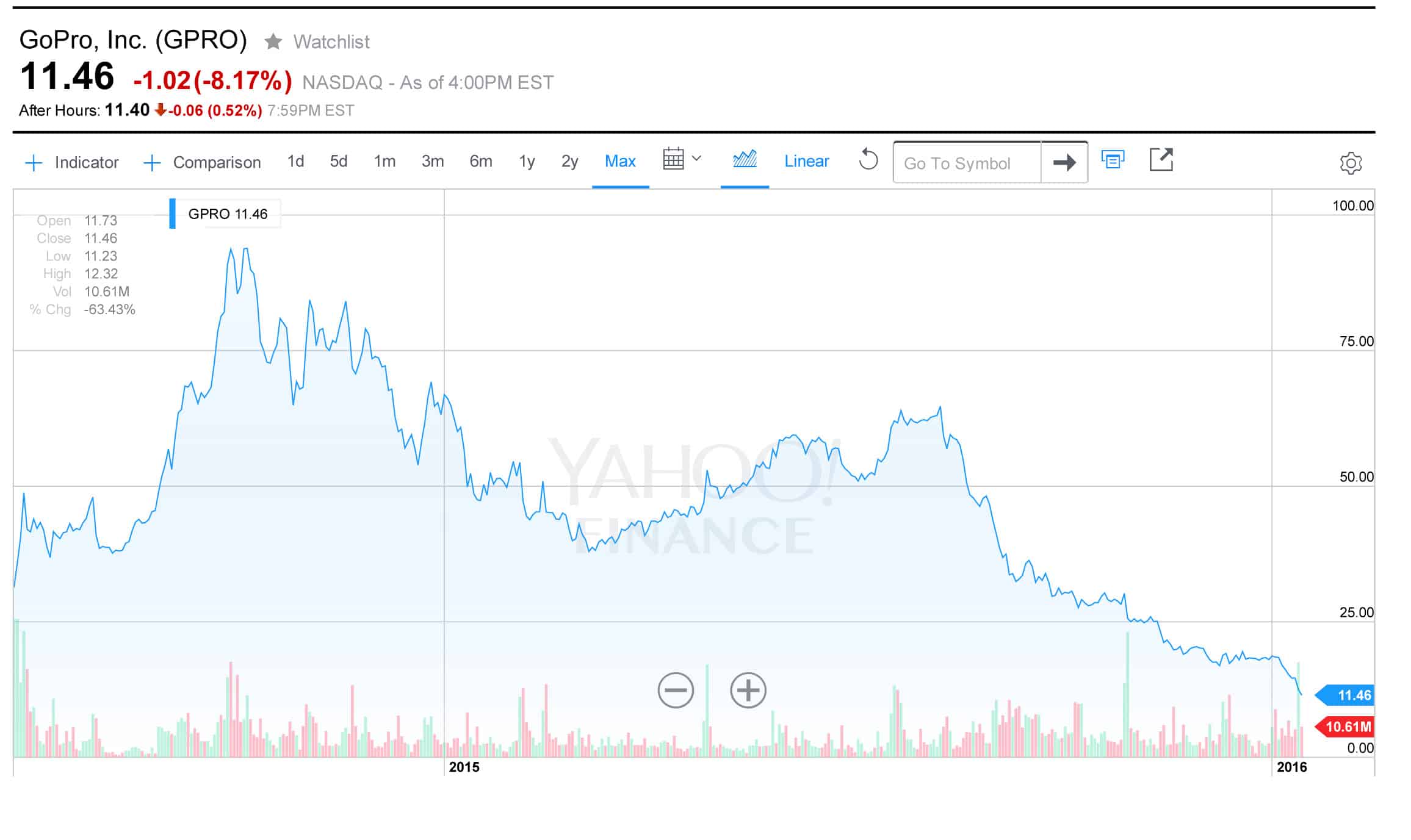 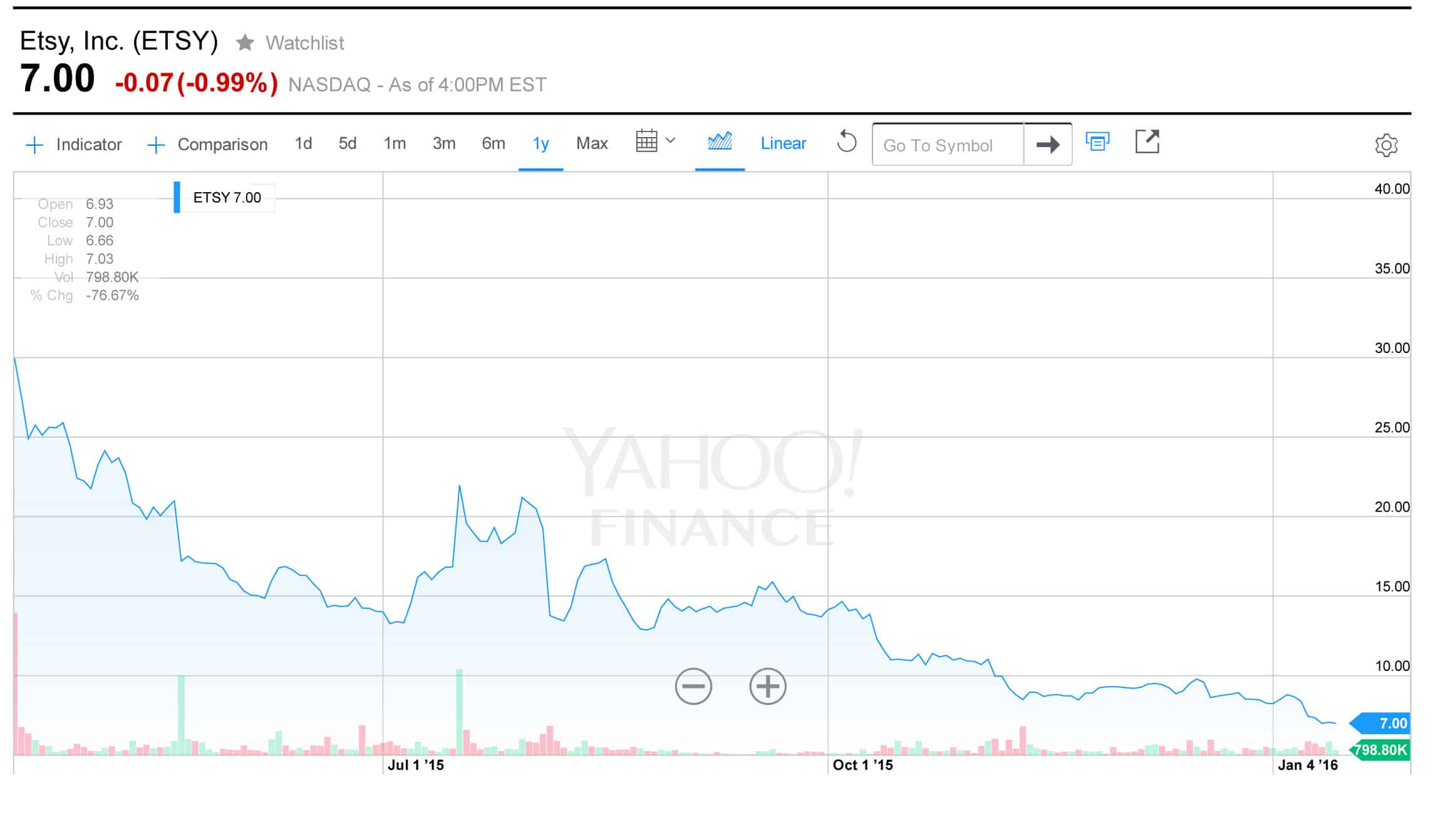 In a display of fairness, let’s also include Amazon and Google though they are now the landed gentry and not ingenues. Still, let’s try to overwhelm that confirmation bias, no? 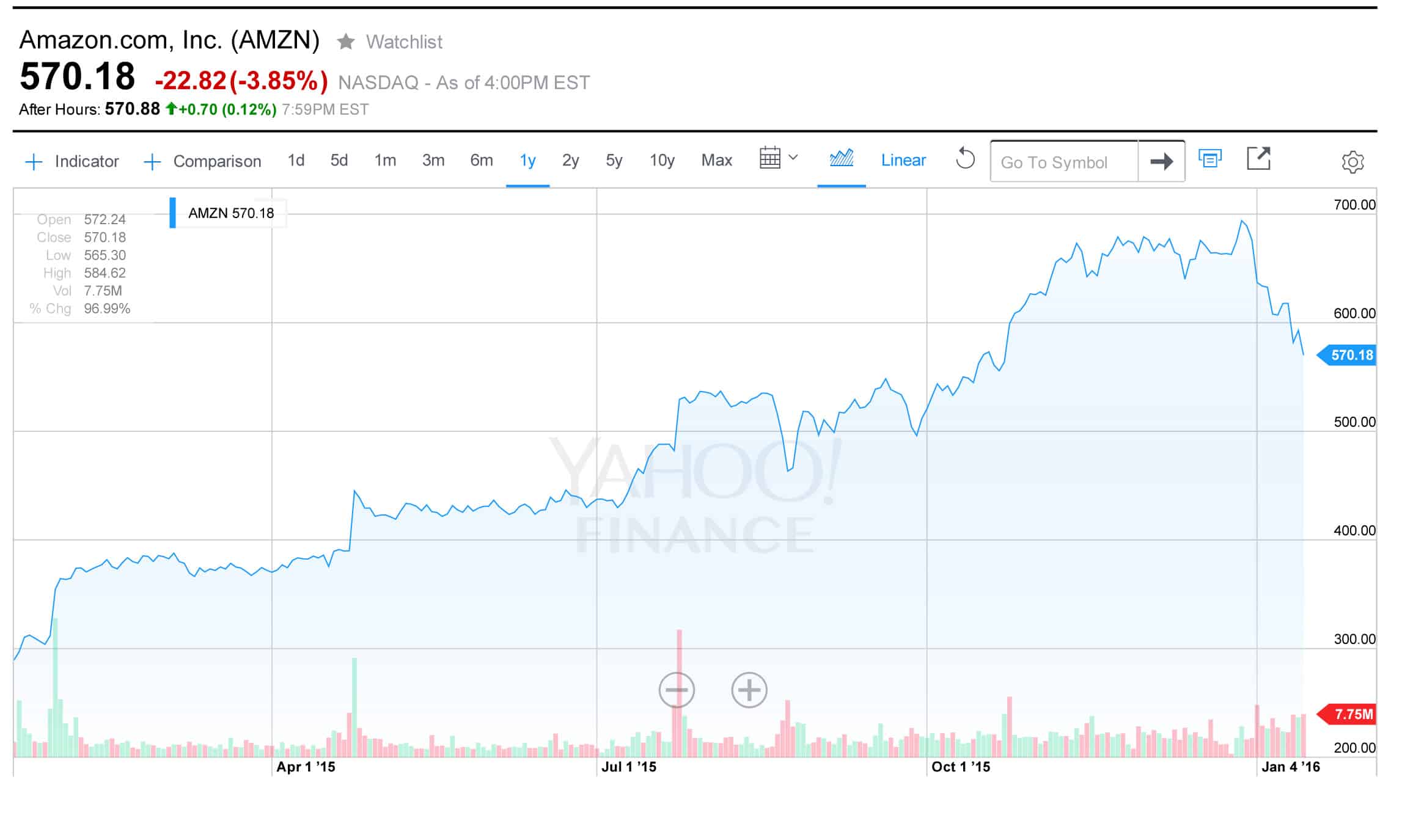 Please note that while Amazon has been a good ride for the year, at year end it has taken a shot to the nose. In this result, they are feeling the same inflection point?

Here is Google — haha, that’s Alphabet, Big Red Car. You’re not as hip as you think you are, tin bucket. 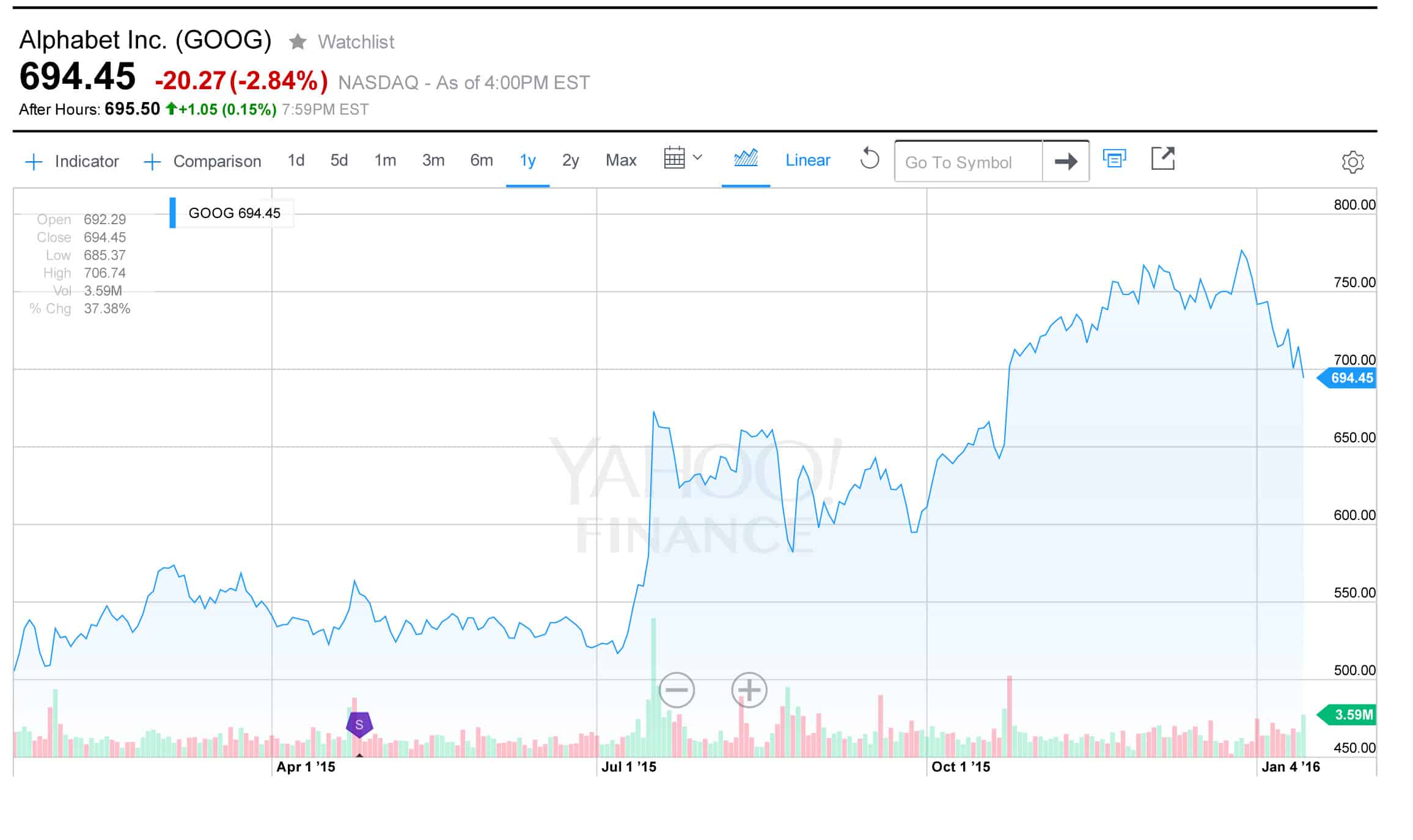 In the general concern about the economy and how its mud splashes onto the stock market’s skirt, one is forced to take a look at oil. The Big Red Car thinks that the slide of oil is the tax cut the economy has been looking for at the pump.

It is nice for those of us who are enjoying $1.44/gallon gas in Austin. But it is going to throw a monkey wrench into the oil business — big alligator tears by the Big Red Car. Watch them.

This development is a net plus for the economy.

We spoke of oil before, right?

WTF — What The Frack? Oil Prices At 12 Year Low

American foreign policy is a disaster and to the extent that our economy is dependent upon global trade, this is not a good thing. You can make your own independent decision on whether the dip in oil prices is good or bad. Big Red Car thinks it is both.

The state of venture capital funded, pre-ipo companies is a concern. Valuations got out of control in 2015 and now everybody knows who farted. These companies are looking at lower valuations to be public than their last private values at the funding window. Not a huge concern but a real concern. Particularly as 2015 was not a good year for IPOs and many companies find themselves with no other exit strategy than tapping into a public pool of greater fools. Mean but true?

Final comment: The year 2015 looked like a great year for tech IPOs. At the beginning of the year, there were a list of “no miss” IPOs putting on their blush and touching up their makeup. At year end, Tech Crunch said: “Worst Year For Tech IPOs Since 2009”.

Read the article here but know that only 28 tech companies threw themselves into the IPO mosh pit, some hit the dancefloor quickly as noted above. That compares to 62 in 2014 and 48 in 2013.

Remember we are talking anecdotal musings and two data points don’t make either a trend or a database.

But, hey, what the Hell do I know really? I’m just a Big Red Car and I’ve got my antennae out.