OK, there are other things out there like Venezuela and the idea the Russians might have already slipped nuclear weapons into the country — Big Red Car is a huge skeptic — and be ready to trigger Cuban/Venezuela Missile Crisis Redux. This could get dicey quick.

But, there is something we need to get on top of now. NOW. Hypersonic weapons.

Here’s a picture of Vlad Putin overseeing the testing of an Avangard hypersonic missile that Russia claims is capable of Mach 20 — 15,340 MPH. For the record, the Big Red Car is skeptical of all Russian weapons claims. Of course, the American military establishment uses such info to get Congress to take their hands off the checkbook.

The test was conducted at the Kura Test Range which is significant as it is a real test range that Russia uses frequently. It was observable from space. The total travel distance was 3,800 miles, so this was a full scale test when you think how accessible all of Europe is to Russia.

Hey, Germany, why the Hell are you buying natural gas from a country that has weapons that can nuke you?

It is also significant that Putin kept his shirt on and he wouldn’t have come for a dud.

In achieving such high speeds — which effectively defangs and castrates every anti-missile system known to mankind — there are huge aeronautical and materials issues, notably they generate enormous amounts of heat which can incinerate them or fry the systems. Control surfaces become wacko in thin air — nothing to push against. Oxygen gets thin, nothing for engines to burn.

The Russians and the Chinese are actively testing prototypes, so one has to believe they have figured out the heat issue.

Hypersonic missiles operate at the top of the atmosphere as opposed to Intercontinental Ballistic Missiles that penetrate to enormous heights and then come raining down. This ICBM flight characteristic takes time and time is the friend of all anti-missile systems as it allows the anti-missile system to locate and track the warheads as they re-enter the atmosphere. While it is still like firing a BB at a duck, it is possible.

Hypersonic missiles fly or glide at high rates of speed making them impossible to find, track, and destroy. Obviously, they would target American anti-missile capabilities thereby opening the door for a larger conventional nuclear strike.

I feel the need for speed, hypersonic speed

Hypersonic weapons of the cruise missile style can be thrown into the Heavens on an ICBM and then multiple units can seek their targets. They can also be launched from a plane. The targeting is totally self-contained and the Avangard can fly to its target with no further guidance required. “Fire and Forget” is the play.

The Avangard is, technically, what is called a “boost glide” weapon meaning it has propulsion capabilities to assist in achieving hypersonic speed or it is boosted to altitude by a rocket or a plane. Some weapons don’t require any boost as they just point downhill and they are so slick they accelerate to these speeds.

The US has long been focused on anti-missile defense with systems like the Ground Based Midcourse Defense system that is deployed in Alaska and California, the SM-3 missile interceptor system deployed on US Navy ships at sea and Romania, the THAAD missile system, and the Patriot PAC-3.

None of these can hold a hypersonic missile’s jock. Sorry.

Yeah, well the Chinese are actively working on the same technology. Here is a picture of a system that they claim is solely for civilian applications. Cough, cough. 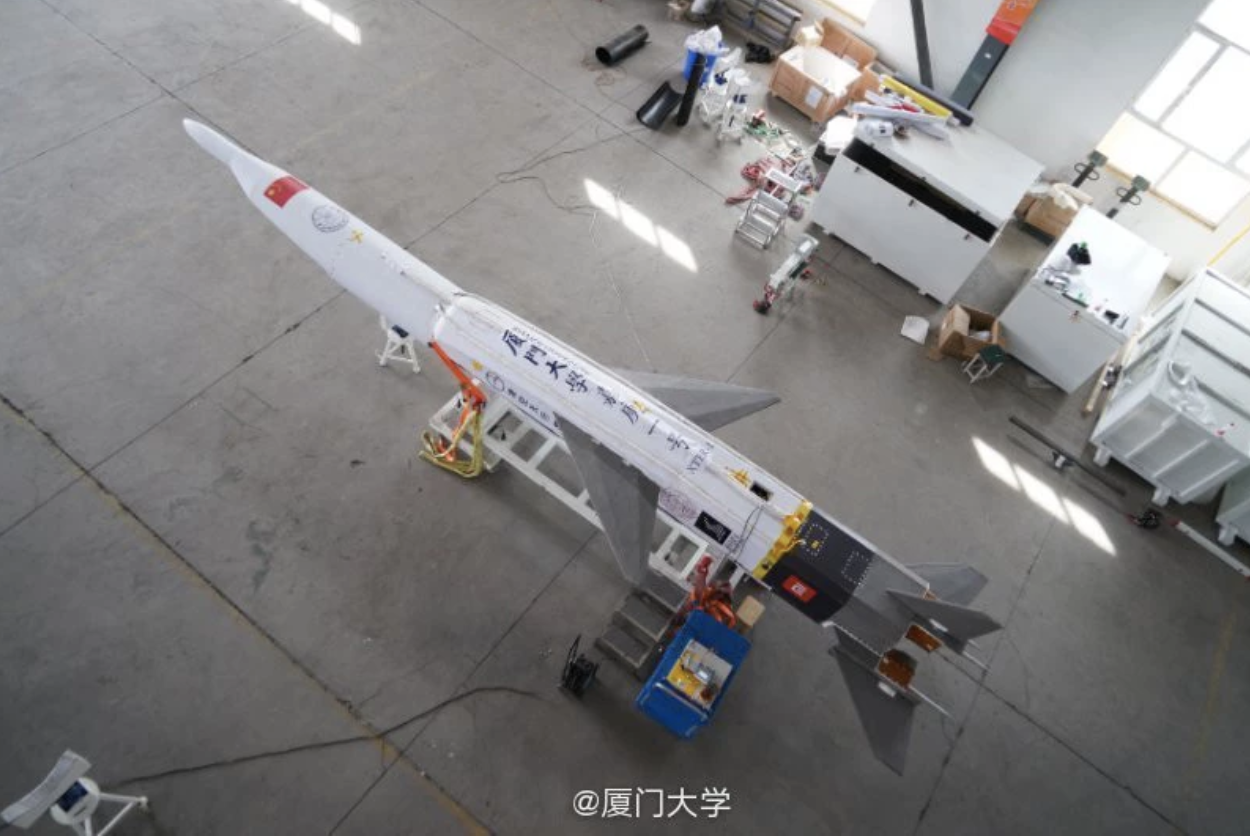 The Chinese allowed this to be seen, perhaps, for propaganda purposes and to show they are in the game. Who really knows?

It is powered by ramjet (Mach 5 limit) or scramjet (Mach 15 limit) tech and both breathe normal air and use oxygen. Bit of science for y’all — air is scarce at altitude and so thin that control surfaces have little purchase. This is an aeronautical problem.

The Chinese design (Jia Geng No. 1) is thought to be able to attain Mach 3 with ease.

Something this small could knock out all American anti-missile defenses one-by-one.

The intel spooks say this baby was tested by the Chinese at their Korla Missile Test Complex in Xinjian. It is claimed to be civilian as it is also the type of tech that would be used to propel a hypersonic airliner that would take one from New York to London in 38 minutes — give or take a minute.

What are the Americans doing on hypersonic, Big Red Car?

Not to fret, dear reader, the military-industrial complex is alive and well. We have Lockheed Martin hard at work on two hypersonic weapon systems:

1. The AGM-183A Advanced Rapid Response Weapon called the Arrow. It is the spawn of DARPA’s Tactical Boost Glide program.

2. The Hypersonic Conventional Strike Weapon — the Hacksaw is a solid fuel rocket with GPS guidance with a service date — service dates mean deployed to the Air Force — of 2022.

Lockheed Martin cashed a $928MM check for this program.

Haha, and you thought the military-industrial complex was on vacation?

The US weapon systems make a distinction between “boost glide” and “powered atmospheric” weapons.

1. Boost glide weapons are unpowered and gain their energy from the altitude at which they are deployed. They are, essentially, “dead stick” landing weapons.

These weapons top out at Mach 5.

These weapons top out at Mach 20. The Americans have been able to get another Mach 5 more than our adversaries.

Advanced concept space based anti-missile systems do not appear to fare any better than land based ones because the hypersonic weapons are difficult to detect and they fly fast as Hell, so normal interception math is tough.

We are going to be thrown back into the clutches of MAD — mutual assured destruction. Since the advent of the MAD school of thought, nobody has nuked anybody.

The Russians are also developing a nuclear powered torpedo that could arguably cross the Atlantic and call on Annapolis with a huge warhead. Think thermo-nuclear 250 KT weapon.

There is one good aspect of this — The Russian economy is as big as Italy’s and it is tied to oil. If the Americans keep throwing money at these tech weapons and the Russians try to match us, one day they are going to have “insufficient funds” and they will go broke. This is what happened with the end of Communism. They went broke.

A chap named Ronald Reagan broke the Russians, the Iron Curtain came down, and the USSR splintered. It was a strong play and only a guy like Reagan could have pulled it off.

If we can keep the price of oil down and make the Russians spend money like drunken soldiers, the accountants will be the ones to tell the Russians, “No bueno, Vlad.”

This is why we want the Russians to have to feed the Cubans and the folks in Venezuela — it’s expensive.

But, hey, what the Hell do I really know anyway? I’m just a hypersonic Big Red Car. Convertible weather in the ATX, y’all.