What can we learn today from the Costco rotisserie chicken?

Big Red Car here on a sunny Monday, headed to a warm afternoon. Ahh, on Earth as it is in Texas, Austin By God Texas!

So, what can a CEO learn about how Costco sells rotisserrie chicken, you ask. The Costco rotisserie chicken! 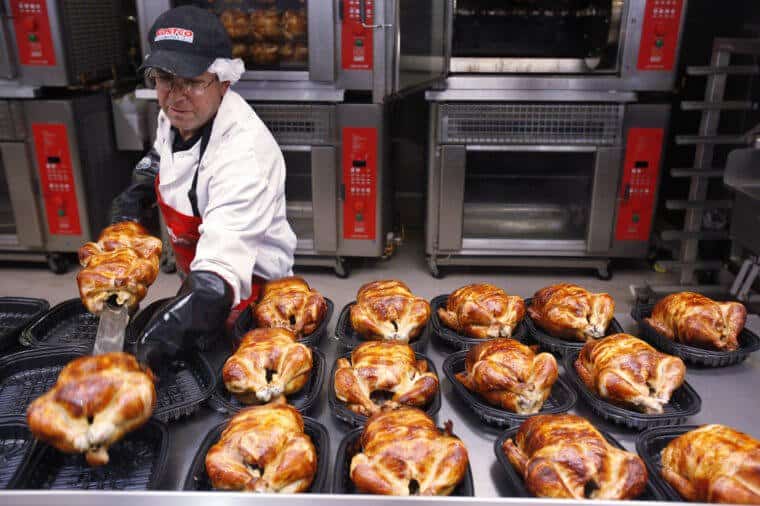 First, some Costco rotisserie chicken facts, shall we?

2. They sell them for $4.99/chicken and have for more than 25 years. So, as you can see, there has to be something going on if they’ve held the price for more than twenty-five years, no?

5. There is a Facebook fan page dedicated to the “Costco Rotisserie Chicken.”

Why do they do it, Big Red Car?

The answer, dear reader, is Costco believes that the $4.99 rotisserie chicken builds traffic to its stores and that while therein, the Costco customer never leaves empty handed. The Costco customer buys some fruit, a bottle of wine, some white tube socks, a package of micro-fleece towels, , a set of socket wrenches, and the large economy size of toothpaste.

So, they see the Costco rotisserie chicken as a traffic builder, a buzz maker, a PR stunt, and a wise bit of marketing. It is a story and marketing is about storytelling, no?

It is also a commentary on Costco’s culture — sending a clear message that Costco is dedicated to delivering value, is managing profit margins and not pricing things based on what the market would bear. All of this by taking a $0.50/chicken poke in the chicken thighs.

Yes, dear reader, but Costco is not ignoring good business. They are currently building a $300,000,000 chicken-processing plant in Nebraska which will drive their costs down while delivering more than 2,000,000 chickens to their store-located rotisseries a week.

If you are a CEO, I challenge you to find a parallel marketing initiative in your startup. What is it? What could it be?

But, hey, what the Hell do I really know anyway? I’m just a Big Red Car. Good week, y’all!