Evolution is a real thing. We are seeing companies evolve due to the realities of the Internet and digital everything.

Do you recall just a couple of decades ago when we knew that hard copy, paper newspapers were a “dead man walking?”

You just knew all that content was going digital and that a paper newspaper was a death sentence. Right? Not so fast, amigos.

Remember when everyone said the New York Times — once America’s paper of record — was headed to the dustbin of history?

There is, however, an alternative to the dustbin of history — it is called “adaptation” and the 170-year-old New York Times has successfully undertaken that course of action.

Here are the facts:

1. While we were all engrossed by social media, the New York Times pivoted and became a big time “media” company rather than just a bird cage droppings newspaper.

2. The NYT has a powerful digital presence with more than 8,000,000 paying subscribers of whom 7,000,000 subscribe to at least one additional focused area of interest — gardening, dining out, gamers, sports.

No surprise really — newspapers were built on the subscription model. Any paper boys out there?

3. Where once the NYT delivered free “news,” now it delivers the same information but repackaged as unique content, documentaries, television shows, and podcasts.

This is a successful repackaging of old wine in new bottles.

4. The NYT is profitable as a business and Wall Street has been paying attention to the transformation rewarding the pivot with an $8B market cap. 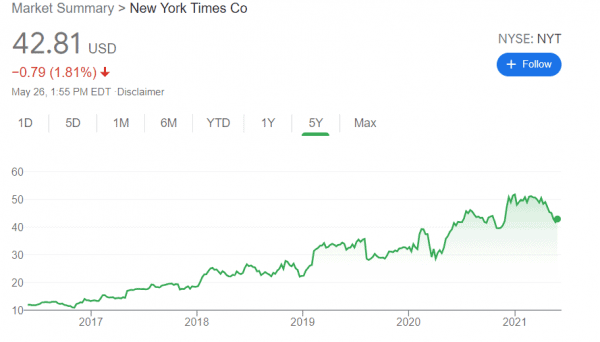 You could have bought the NYT Company at about $12 back in 2016 and ridden that pony to more than $50 in four years. Not too shabby.

[The NYT Company could have been bought for $5.55/share in 2009 giving you a twelve year ten bagger. But, let’s be honest, you don’t have that kind of vision. Admit it.]

5. The NYT is growing via acquisition. They are currently looking at buying The Athletic, a business with 1,200,000 subscribers that is, unfortunately, unprofitable currently. The Athletic thinks it is worth $500,000,000. Is it? Who knows.

Take a second and calculate the cost per subscriber. Might be a little pricey.

Bottom line it, Big Red Car, we have a lunch today

You can teach an old dog new tricks if the old dog is willing to pivot and to embrace the digital reality of the world as it truly exists.

I think the NYT — which I despise from an editorial perspective — has done as good a job as can be found. This was a stodgy newspaper that has now become a powerful media company by repackaging its content and distributing it in a more modern digital fashion.

To the business and the story, I say, “Bravo!”

But, hey, what the Hell do I really know anyway? I’m just a Big Red Car. Pivot, America, adapt or die.