I have been a skeptical voice on We Work since the beginning — meaning since I read their S-1, understood their business model, and learned about Adam Neumann, who I accused of being a toxic force on the company as a leader and a manager.

This was long before the guy got fired. Never liked him. Thought he was a poseur. Real estate as a service, my ass.

What I am not skeptical about is the market for co-working spaces as a real estate product. I think they are good.

In my personal real estate career, we had some vacancy in a suburban mid-rise office building and converted it to what was then a co-working space. We used to use the term “office suites.” It turned out very well for us.

1. We collected (earned) 2X the market rental after expensing all operating costs. Meaning when we added up the individual small office rentals, subtracted all the costs — we got twice the rent we would have gotten had we rented it to an arms length, independent third party.

2. We sold the business, as an operating entity subject to a lease, to a third party, Regus.

3. We got a solid tenant in Regus paying a slightly above market rent and did not have to spend a penny in tenant improvements.

OK, Big Red Car, what did we learn?

What we learned, dear reader, is that you can serve the co-working market without undertaking the assignment with the same capital structure and business model as We Work. 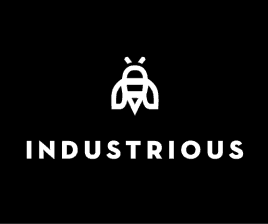 run by a chap named Jamie Hodari out of New York. By the way, there is no report that Hodari sold Industrious the logo or the name. I will check further.

Hodari has a different take on how to wring a buck from the co-working phenomenon that avoids the necessity to raise the gobs of capital we saw in the We Work shit storm. [In addition, he does not own or lust after a Gulfstream business jet.]

Here are the high points distilled from a recent interview.

1. Industrious does not own the real estate. They manage the real estate for the building owner. If this sounds like the industry standard normal real estate investor – property management company relationship, then bravo. You have been paying attention.

It is essentially the way that McDonald’s operates their franchise business if you think about it and you squint.

It is a lot less capital intensive to manage rather than own.

Surgeons do not buy hospitals to practice surgery.

2. There is a clear operating leverage financial equation at Industrious. Expenses rise at less than half the rate of revenue increases.

If revenue goes up by $50, then expenses go up less than $25. This is the basic formula a growth company has to be living in order to justify growth.

Last year for The Industrious — Revenue +129%, while Expenses +50%. [I have taken to adding “THE” to all sorts of nouns, such as THE Crimea or THE Ukraine. Very worldly and international.]

3. Since there are no long term leases being sub-rented as short term “desks” there is no recession worry about what happens when a 15-year lease payment bangs into a market contraction that drives “desk” rentals down.

4. The balance sheet is clean as there are no real long term liabilities. Today, We Work carries a $47.2B undiscounted lease liability on its balance sheet.

5. Brother Hodari says the company will be profitable in Q1-2020. That is different from that We Work rascal Adam Neumann who said, “Huh, it may never turn a profit.”

6. Industrious just raised $80MM in a Series D. The company has raised more than $222MM in cumulative funding.

7. The company is going to use the proceeds to expand from their 40 US locations into Canada and Europe.

I always like a company that grows organically, grows by expansion, and grows by acquisition. It is in balance.

Jamie Hodari has been careful to refrain from going ugly on an ape as to Adam Neumann, saying only, “I think (WeWork) has validated the need and demand for co-work space. We are indeed finding that companies are trying it out and coming back asking for more.” 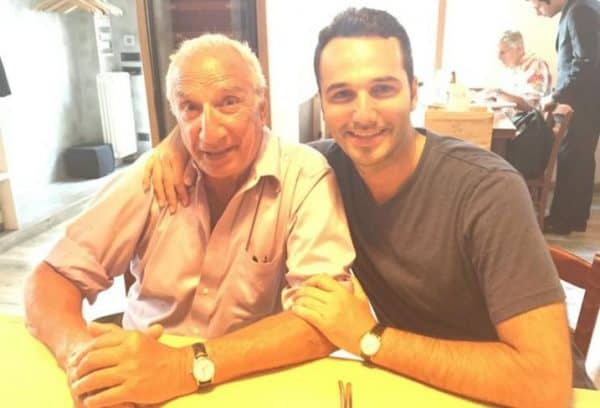 Picture of Hodari with his 83-year-old father who lives on a lake in Italy. The younger Hodari is no wunderkind who left college before getting a degree to conquer the world. He has degrees from Columbia (BA), Harvard (Masters in public policy) and Yale Law School.

He has a healthy respect for mentors and regularly consults with them.

The guy seems refreshingly “normal” and grounded. The difference between his apparent management style and that of others who shall remain nameless is substantial. I don’t see this guy buying a Gulfstream or celebrating layoffs with a round of tequila shots.

But, hey, what the Hell do I really know anyway? I’m just a Big Red Car. Be well on Wednesday. Ouch. 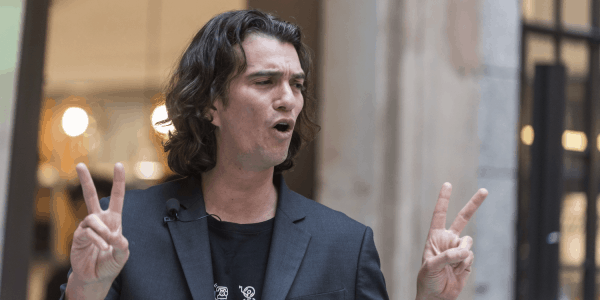