China celebrated the 70th anniversary of its iron clad Communist yoke on the neck of its people yesterday. It was a fitting tribute to tyranny, enslavement, murder, and military danger. 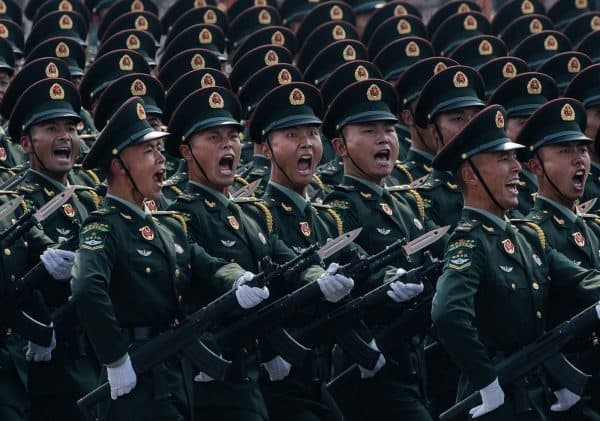 China celebrates the horrific nature of its Communist foundation every day. Yesterday was not a unique celebration, except that there was a parade in which the Chinese celebrated their expanding nuclear threat to the world by showcasing a nuclear strike weapon that can make it to the USA in about thirty minutes.

China wants to be seen as a credible leader of the emerging world and a trustworthy nation — nothing says “trustworthy” like a nuclear weapon that can arrive at your backyard BBQ in less than the time to light the grill and throw the various meats on board.

Here is my Bill of Particulars against China.

The extension of a tradition of cruelty — Mao

Above the picture of Chairman Mao is President-for-life-plus-ten years Xi Jinping, the most powerful Chinese leader since Mao. Xi is the head of the government, the military, and every Communist Party of China organ and governmental entity. He can’t possibly remember all the stuff he is in charge of. It’s staggering. It is pure Mao. 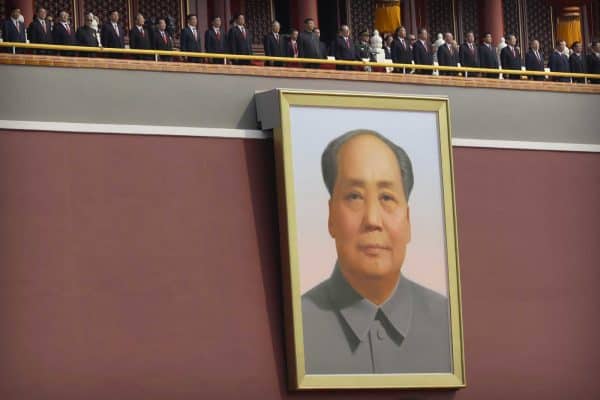 Mao, famously, led the country through the defeat of the Japanese in World War II with Chiang as an ally, the Long March, the defeat of the Nationalists, the Great Leap Forward, the Cultural Revolution, and the emergence of China from the fog of its own existence to take a position as a ruthless nuclear power ready to actually use these weapons.

He went from being a college educated son of a peasant to being a monster whose name stirs up visions of misery.

The Five-Year Plan (the Great Leap Forward) ended with the death of 52MM Chinese, of which 30MM were peasants whose rice crops were confiscated to allow them to be exported. Mao let his people starve to drive the supply of foreign currency. This is now known as the Great Chinese Famine, but it wasn’t an act of nature; it was an act of cruelty.

Mao said, “To distribute resources evenly will only ruin the Great Leap Forward. When there is not enough to eat, people starve to death. It is better to let half of the people die so that the other half can eat their fill.”

The elite city dwellers were sent to the countryside to be “re-educated” by the peasants (Mao was the son of a successful peasant). Almost every college and university was closed. Intellectuals, writers, scientists, academics, the well-educated were sent to the re-education camps.

More than 100,000,000 Chinese were persecuted by the murderous Red Guard. It is impossible to get good numbers on the deaths, but estimates as high as 3,000,000 dead seem likely.

The situation became so desperate that cannibalism became a known part of the equation. It is one thing to murder your enemies, but it is something altogether different to eat them.

Somehow, during the Cultural Revolution Mao was considered to be a “woke” feminist though he said the following in 1973 to Henry Kissinger: “China is a very poor country. We don’t have much. What we have in excess is women. Let them go to your place. [He offered 10,000,000 Chinese woman to Kissinger]. They will create disasters. That way you can lessen our burdens.”

During the Korean War, Mao committed millions of “volunteers” to defeating the United Nations Allies, but primarily the USA. After admitting to 600,000 casualties, the recently revised numbers suggest as many as 1MM Chinese soldiers were killed.

When Mao acquired a nuclear capability, he said, “If the worst came to the worst and half of mankind died, the other half would remain while imperialism would be razed to the ground and the whole world would become socialist; in a number of years there would be 2,700 million people [in China] again and definitely more.”

By now, the Soviets had fallen out with Mao over his aggressive expansion of Communism and approached the USA about a pre-emptive strike against the Chinese nuclear warfighting infrastructure.

This is the legacy of Mao upon which President Forever Xi Jinping celebrates the 70th birthday of China Communism.

China is a digital, tech-driven tyranny in which it intends to reward the obedient and punish the disobedient. Every citizen will have a Chinese Social Credit System number that places them between trustworthy/obedient and disruptive/disobedient.

I wrote about that subject here:

I see a surge for the Chinese tattoo business. It’s only a matter of time before each Chinese person has a mandatory CSCS number tattooed on their forehead.

The Chinese will allocate every social benefit — university attendance, home loans, jobs — based on your Chinese Social Credit System score.

If you know a bit about China’s history, you will recognize the common elements of the wide spread famine, disease, and death associated with the Great Leap Forward in which food (rice, pigs, goats, chickens) was allocated to those who were “friends of the state” and denied to those who were “enemies of the state” resulting in the death by starvation of 52,000,000 Chinese.

China has a longstanding threat against Taiwan which it considers a wayward, renegade Chinese province. Taiwan was, of course, the island redoubt to which the Nationalist Chinese fled when Mao defeated Chiang Kai-shek, the flawed leader of the Republic of China who the US had supported during World War II.

In the past, this has been a fairly tame threat, but recent developments in shore-to-ship missiles make it ill-advised to be a warship in the strait between Mainland China and Taiwan. The US conducts “freedom of navigation” patrols in the Taiwan Strait with US Navy vessels that would be easy pickings in a war scenario. In addition, the coast of Mainland China opposite Taiwan is home to tens of thousands of landing craft to facilitate the delivery of a military landing force to take Taiwan by force.

This threat shadows over 40% of the world’s shipping lanes and can hit the Philippines easily. 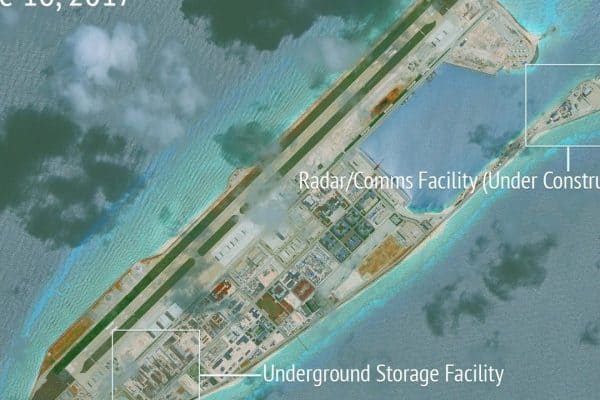 When this program started during the Obama admin, it was said to be a place for Chinese fishing boats to make an emergency port call, get fuel, and take a hot shower. The magnitude of the lies is only dwarfed by the magnitude of the actual militarization. The massive environmental damage is only an afterthought.

From a geo-political perspective, these locations are all subject to competing claims from the Philippines, Taiwan, Vietnam, Malayasia, and Brunei. this is raw, naked aggression.

Most recently, China has moved drilling rigs into the area and has begun to drill for oil.

In the parade yesterday, China unveiled two weapons — hypersonic missiles capable of achieving speeds of more than 7,000 MPH and a missile that can arrive in the USA in 30 minutes.

One of the weapons is very difficult to detect and counter because of its sheer speed. The other is an ode to speed and distance.

Taken together with the foundation of Mao’s easy comfort with the use of nuclear weapons, they are a troublesome development. 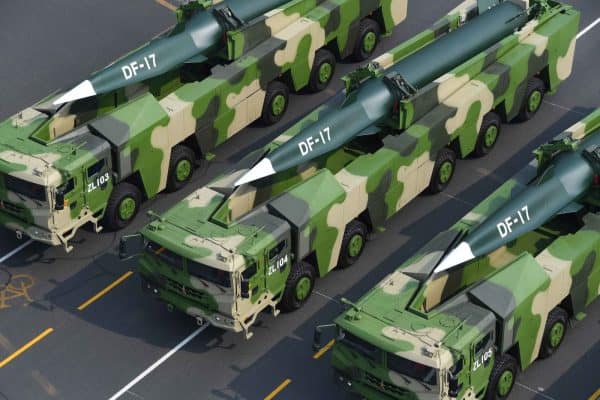 On the trade front, there is nothing good to say about China.

The Chinese are exporters of illegal drugs and merchants of death.

I applaud Donald J Trump for calling them out at every opportunity. For this, he deserves praise and credit.

When the Chinese forced the return of Hong Kong to their control — a perfectly legal step — they promised a “One China, Two Systems” governing approach. 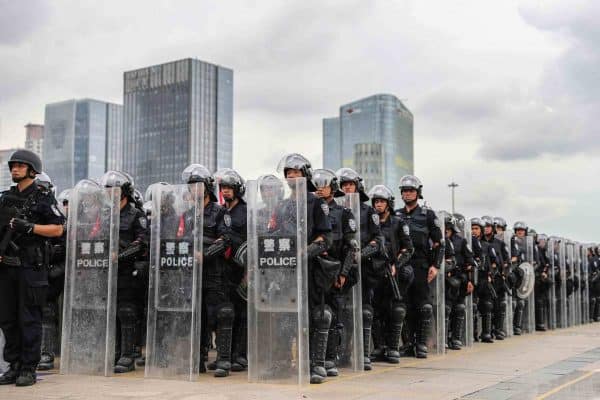 The current situation in Hong Kong, which is suffering terrific repression as they try to re-assert the promise of “two systems,” is all one needs to consider.

OK, dear reader, I have a few more points (like North Korea), but I will wrap up.

China celebrates 70 years of despotism. It is a horrific record of oppression, death, and misery. It is nothing to be proud of and it is a threat to the free world.

Know China. Understand China. They are our enemy. Not the people, but the government. 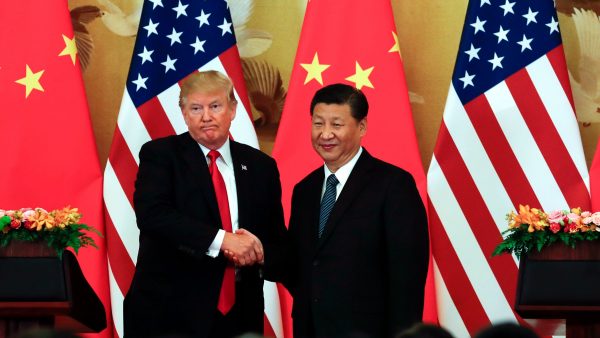