Second conclusion: We are in the midst of fifty separate fights and the most important one currently is in New York State and, in particular, in New York City and environs.

Again, most of those cases are clustered in New York City and the surrounding counties.

So, how can you tell we are winning, Big Red Car?

I looked at the total number of cases and the curve is still going straight up. We have a total of almost 50,000 cases and the trajectory of total cases still looks exponential.

But, I checked the graph of Daily New Cases and it also is going up.

I have an eureka moment and ask myself — Is the rate of increase increasing, decreasing, staying the same?

Then, I make this graph: 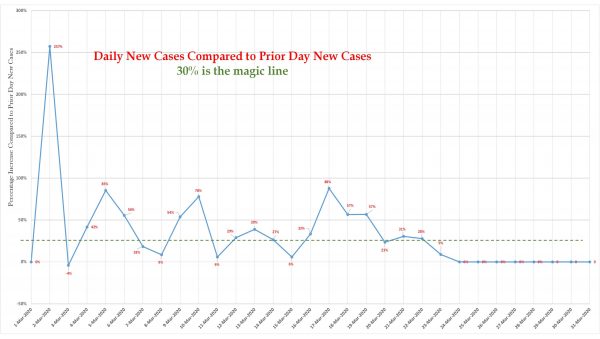 You will have to click on the graph to see it. You will notice that the rate of INCREASE of Daily New Cases has begun to decline. I can’t say if it is the BIG turn, but it is a leading indicator.

If, as, and when the rate of Daily New Cases declines, that will happen BEFORE the total number of cases goes down. Right?

The rate of increase of Daily New Cases will begin to dampen — reduce in absolute terms — BEFORE it actually begins to decrease the total number of cases.

It looks to me like the daily increase in Daily New Cases has begun to decline. You agree? 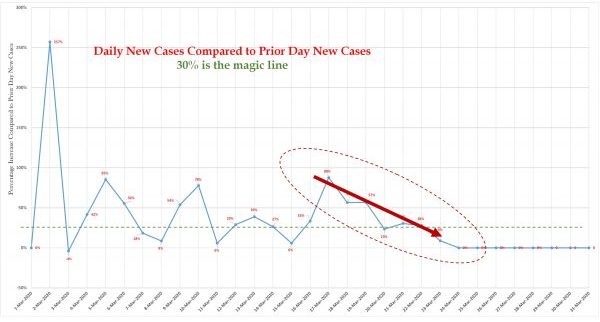 We have eight more hours until 00:00 GMT, the gap will close, but we are doing fine.

In any event, the rate of increase is below the magic level of 30% which gives us 2X more cases every three days. The curve is going to flatten out.

In closing, let me say — NEW YORK and NEW YORK CITY is where the battle is being waged.

There you have it, dear readers. I think we are starting to win based on the declining rate of Daily New Cases in spite of the dire situation in New York.

Now, get down on your knees and say a quick prayer for the medical gear manufacturers, doctors, nurses, truck drivers, grocery shelf stockers, and all the people who are making the world work.

My Irish spider sense tells me we are just about to the crest and the waters will recede quickly. A guy named Noah told me that.