We woke this morning to a Tweet from our Tweeter-in-Chief picking a long overdue fight with OPEC. The Organization of Petroleum Exporting Countries was formed in 1960 by Iran, Iraq, Kuwait, Saudi Arabia and Venezuela.

[See what odd bedfellows a bit of oil and money creates?]

There is an “observer” class consisting of Egypt, Mexico, Norway, Oman, and Russia.

OPEC exists to manipulate the price of oil by controlling the level of production thereby driving prices up through artificial scarcity.

The countries which form OPEC would whisper that OPEC was formed in response to the control of Middle East oil exercised by the Seven Sisters.

This group once controlled 85% of the world’s reserves.

Since the decline of the original Seven Sisters, a new breed of cat has emerged – the state owned oil company.

Some of the New Seven Sisters — through their sovereign nation energy departments — are also members of OPEC.

The New Seven Sisters control 65% of known oil reserves, though this number is changing with enhanced American production.

The beef, which is long since established, is that OPEC exerts market control on the price of oil by manipulating production. Current production controls have driven oil to approximately $70/barrel, a 3-year high.

When the price of gasoline, a refined product which tracks with the price of crude, goes up, the cost of everything in the US goes up. It is not unlike a tax. Except that the tax revenue is not going to our Treasury.

We have fought a number of wars in the Middle East which have been proxy wars for the control of oil or the prevention of bad actors’ control of oil.

We have used our military to ensure that the Straits of Hormuz are not blocked or interdicted. If we are to pay this price, others should join in with us or give us credits on other balance sheets. Seems fair?

What Should We Do, Big Red Car?

1. We should encourage our President to continue sticking it to OPEC. When he did the price of oil dipped. This is the Bully Pulpit Effect. 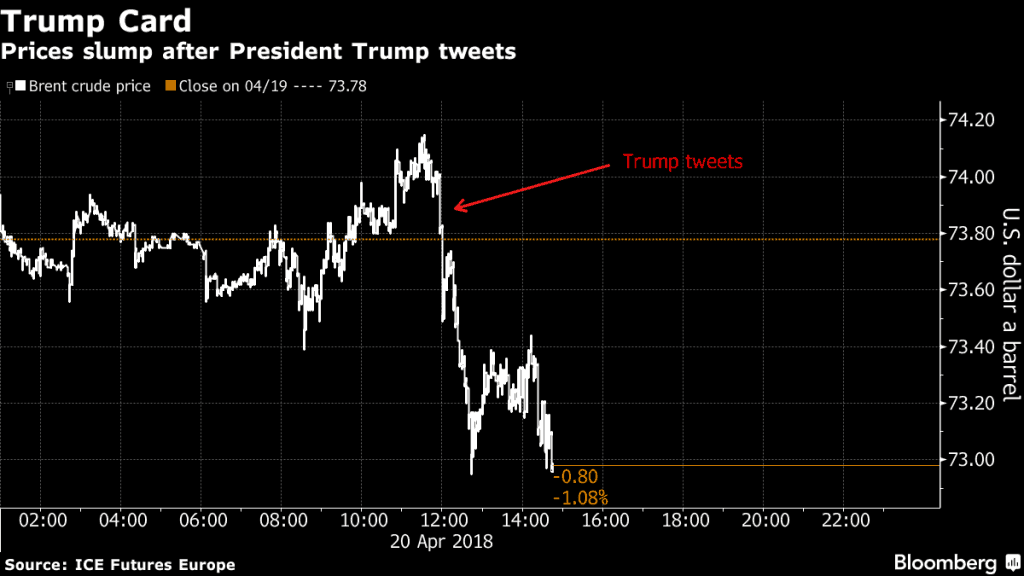 2. We should talk directly to our allies who are part of OPEC — talking about you, Saudi Arabia — and make sure they realize that our relationship with them is lubricated with — wait for it, y’all — oil.

3. Keep a stern eye on Iran and Venezuela. Iran is currently able to participate in the world market because of the Iran nuke deal.

If we decide to pull the Iran nuke deal, we will be putting sanctions on them. How will that impact their newly unfrozen oil supply?

Venezuela is slowly drying up. They have enormous reserves and they are not able to get oil to the refineries because of political chaos.

4. We need to spur American production, including strategies which forego oil for other forms of energy — talking to you, nuclear power. Let’s get the US totally energy independent.

5. May be time to reconsider the Jones Act. Look it up. I am not sure on this one because I feel like foreign flagged ships operating in US waters with lower than US safety standards is inviting trouble.

6. Russia is dependent upon oil to fund the country. It is a strategic benefit to the US-Russia relationship to have low oil prices. This alone should motivate us to use all forces at our disposal to drive oil prices lower.

Remember, Russia is a little country with an economy the size of Italy. The Russians did not invent pizza. Advantage Italy. Wait — nuclear weapons. Shit.

So, there you have it, dear reader. We need cheaper oil and our President gets it. Let’s go after cartels which manipulate prices of oil. In the old days, we would have gone to war over something like this, no?

Who can do this? Uhhh, Trump can do this because the guy is fearless.

But, hey, what the Hell do I really know anyway? I’m just a Big Red Car. Be good, y’all, but not so good it impedes your fun.