Pure evil conveys a great luxury on those who are forces for good. Its purity is so virulent and undiluted that a thinking man does not have to engage in subtle thought to fashion a plan or to justify action. It broadcasts a call to action that is unequivocal. It screams out for a grave and to be laid in that grave.

Nazis, ISIS — so evil that the reaction is instinctive, pure and obvious.

We do not need another scolding

At a prayer breakfast, President Obama delivered a scolding lecture — something he has mastered through frequent practice — in which he cautioned America not to “get on our high horse” about things such as ISIS and the burning alive of a Jordanian pilot because much wickedness had been visited on the world in the name of Jesus Christ. Even were that true, what difference does it make? Evil under any sponsorship is evil. 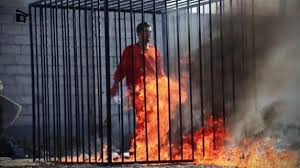 This was a ham handed attempt at creating some moral equivalence between things that happened centuries ago and the horrific violence that was splashed on the world’s screens. He invoked the Crusades as an example. The Crusades were initially undertaken to regain access to holy sites in the Middle East and continued for approximately 200 years — off and on. As someone asked me the other day: “Was that before the Internet?”

While I think the history lesson is not a sound one, the faux moral equivalence is simply the latest chapter in the taming of American exceptionalism and the defense of radical Islam.

Make no mistake, the President of the United States is a proponent and a defender of radical Islam directly — meeting with members of the Muslim Brotherhood (who provided two divisions to the Nazis in WWII) and failing to identify and condemn the evil that is radical Islam.

America did not have a direct role in the Crusades and there is no evidence that America is on its “high horse” at all. Nonetheless, the Scold in Chief didn’t miss an opportunity to chastise America while providing more shade and shelter to radical Islam.

How much is enough?

Recently the 70th anniversary of the liberation of Auschwitz was noted. At Auschwitz the world has another example of the presence of undiluted and pure evil. It can be weighed and measured in dead bodies. The Germans killed millions of Jews, homosexuals, gypsies and other taints on the blood of the Master Race. Murders driven by ideology.

ISIS has murdered, raped, beheaded and now burned alive similar victims. The world is again provided with a great luxury — an evil so pure and undiluted as to propel us to act to eliminate it without equivocation or debate.

We have crossed the threshold of enough being enough.

Evil does not negotiate. Evil does not go to rehab and return to mend its ways. Auschwitz was not a speeding ticket. Murder, rape, beheadings, burning people to death — these are not dispute resolution techniques. They are terror and they are the fingerprints of evil. The hands, the arms, the bodies connected to those fingers require killing.

Evil screams out to be eliminated, to be eradicated from the face of the world. The Nazis were defeated and eliminated. But not before they had killed millions of civilians, millions of soldiers and bled their nation dry.

Let us take the measure of ISIS — it is a rabble of perhaps 30,000 thugs who make war against children, women, unarmed men. When faced with with competent opposition — the Kurdish Peshmerga, the Jordanian air force — they are not a significant force.

ISIS is not an organized and effective military force. It would not be a full meal for a couple of American divisions calling on them with air power, armor, artillery and competent leadership. They are an insignificant military force and their elimination would be an absolute certainty if only the world were able to muster the leadership to actually deal with them in real time.

Let me cut to the chase — the continuing presence of ISIS on the planet is the gift of ineffective, feckless American leadership located in the Oval Office. There is nothing subtle about that accusation.

ISIS is not a problem that lends itself to a subtle solution. The purity of its evil liberates us to deal with it harshly.

Leadership is the quality of America that the world desperately needs. The world is paralyzed without American leadership. You may personally find that a silly notion — I do. It should not be so. It is painfully true.

Nonetheless, the world doesn’t rise to confront evil unless there is an American leader to pass out the sheet music, strike up the band and to begin singing. It is so and has been so since World War I. It is our curse. The world looks to us to lead. It looks to the Oval Office to provide that leadership.

The Oval Office has a “vacancy” sign on it right now. We have a Scolder in Chief when we desperately need a Commander in Chief. We need the kind of leadership that will call Auschwitz and ISIS what they are — evil and worthy of immediate and violent elimination from the planet. Having made that call, we need action.

We do not need a lecture on the moral equivalence of radical Islam and the evils perpetrated on the world under the banner of Jesus Christ. Even if that were true, it is not relevant to what has happened and is happening.

There is a scene in the movie Top Gun when the hero, Tom Cruise (Maverick), is launched from his aircraft carrier to support another sortie of US planes engaged with some menacing Migs. His support is desperately needed to carry the day or the fleet may be in jeopardy. Maverick is urged to “engage.”

We are America and this is what we do — eliminate evil when it is visited upon our people. Fail to do this now and it will come to see us shortly, at a time and place of its choosing. The lesson of 9/11 cannot be ignored. Now is the time to act.

2 thoughts on “The Scold in Chief and Ineffective Leadership”