Big Red Car here. Nice day in the ATX and why not?

So the Big Red Car is reading the international news as disseminated by those Reuters folks and comes on an interesting article.

Seems that the Premier of North Korea, Kim Jong Bozo, has executed his Vice Premier for “showing discontent with the policies of the country’s leader.”

Here is the article for you to read

Who knew the North Korean Premier took such an interest in forestry and was so touchy? Apparently Choe didn’t. Did you?

Which brings us to the Big Picture — these guys have nuclear weapons. We let them have them because we had misplaced our cojones or we had lent them to Canada. Don’t remember which but the bottom line is we let these freakin’ lunatics develop a nuclear weapon. WTF is wrong with us?

Guys who execute their own leadership over a Smokey the Bear kind of thing cannot be trusted with nuclear weapons. Can they?

Look at this meat head. Is that a little Donald Trump hair going there? 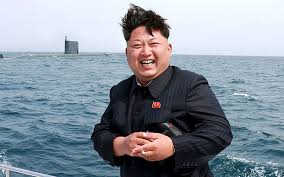 No, sayeth the Big Red Car, they cannot.

So, the teaching point is this — if you are a North Korean do not criticize Bozo about his forestry policies — very touchy subject.

And if you are the world, be careful what kind of bat shit crazy socialists you let have nuclear weapons.

[Thinking, holy shit! It is good I live in America where they have that flirtation with freedom of speech and that Constitution. Cause I disagree with a lot of policies of our exalted ruler. I could get executed just like the NK Vice Premier. Holy shit, sayeth the Big Red Car. Holy shit!]

Now, back to your regular programming and brain washing.

But, hey, what the Hell do I really know anyway? I’m just a Big Red Car. Be good to yourself. It’s been a hard week. Drink some hard apple cider.  Buy Smokey the Bear a drink.

One thought on “The Price of Dissent in a Socialist Paradise”