1. The IMF was formed in July 1944 at the US Bretton Woods Conference in the US. The end of WWII was in sight and the Normandy landings had succeeded.

2. The IMF’s primary mission was once to provide stability in the international monetary system focused on such arcane things as exchange rates for currency. Seems tame?

3. This has now grown to include economic stability, the management and avoidance of economic and financial crises, and raising the standard of living. Globally.

4. The IMF publishes a lot of research on the global economy, financial markets, and outlooks both for large countries and regional economies.

5. In the end, the IMF gives out money. Lots of money. Gobs of money. And, the US either directly provides it or provides an unequivocal guaranty from the US Treasury  which means American taxpayers.

6. The IMF will blow a lot of smoke up the world’s ass that its assistance is loans, but they are literally giving away money — no interest loans, no repayment “loans” and something called Special Drawing Rights or SDRs.

There are 190 member countries and the IMF has a staff of 2,700 persons from 150 countries headquartered in Washington, DC.

There is an Executive Board of 24 Directors representing a cross section of funders and “borrowers.”

Facilitate the expansion and balanced growth of international trade;

Assist in the establishment of a multilateral system of payments; and,

Make resources available (with adequate safeguards — give me a minute to stop laughing) to members experiencing balance-of-payments difficulties.

Can you bottom line it, Big Red Car?

Russia – $17,000,000,000 in SDRs (special drawing rights immediately exchangeable into foreign currency — might come in handy if the world tried to pull the plug on your shitty little economy)

This was from a record level of IMF SDRs in the amount of $650,000,000,000 all backed by the full faith and credit of the United States of America.

Stop and re-read this section. The US, acting through the IMF, funded Russia as it was building its invasion force on the Ukraine border.

While Russian troops were massing on the Ukraine border to slaughter Ukraine, while China was threatening war with the US and the invasion of Taiwan, and while Iran was funding international terror, our government approved the payments noted above from American taxpayer dollars.

WTF are we doing?

You can’t make this stuff up, folks.

You are literally paying taxes so these clowns in Washington can fund dictators, wars, and terrorists. Murder of babies, children, women, and old people and make war on hospitals and schools.

Here’s the KILLER: The United States of America has veto power over every financial arrangement entered into by the IMF. Boom! Joe Biden and Janet Yellen can stop this nonsense tomorrow before breakfast. Why don’t they? 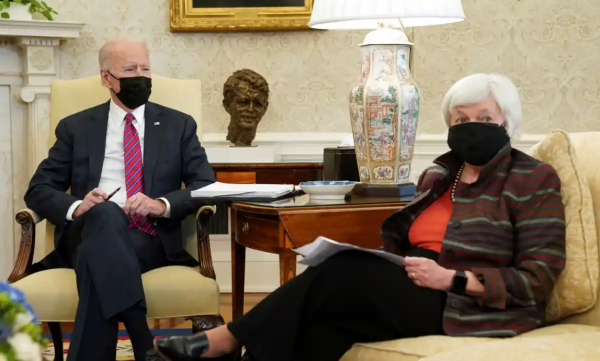 These two Masked Morons could stop this nonsense today. Why won’t they?