The flake, Big Red Car? Who is the flake?

Big Red Care here on a sunny ATX day, not as sunny as usual, but nice, nonetheless. Today, the Big Red Car has a potato stuck in its tailpipe about Senator Jeff Flake, junior Undocumented Democrat #nevertrump Senator from Arizona. 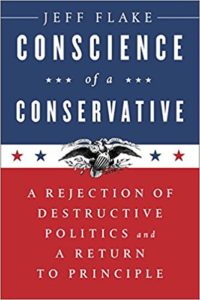 Yes, dear reader, let me cut to the chase. The guy has written two books in the last two years while being paid to pretend to be a US Senator. Isn’t being a Senator supposed to be a full time job?

Or are we paying this flake to write books?

I don’t really care what he writes. Couldn’t care a bit, but I do resent that he’s writing books full time while drawing pay to be an undocumented Democrat Senator. Bother you?

But, hey, what Hell do I really know anyway? I’m just a Big Red Car. Maybe I should write a book?