The People’s Bank of China (PBOC) is the big dog when it comes to regulating the Chinese crypto world.

Alongside it is an entity called the China Banking and Insurance Regulatory Commission (CBIRC). These fellows issued a white paper in 2018 that established that cryptocurrency is a “kind of commodity.” This was the conclusion of a sentiment that began like this: “…the non-sovereign crypto currency shall not be regarded as a ‘currency’; it’s merely a digital symbol programmed and issued by market participants with agreed protocols. It is essentially similar to a kind of commodity that can be circulated.”

This bit of wisdom was contained in a 2018 document entitled The Study of the Development and Regulation of Distributed Ledger, Blockchain and Digital Currency.

So, the first takeaway is that there is an active body of regulation in China and the Chinese regulators are on top of their game, though many market participants may not be following their guidance. That is another altogether different subject.

One last addition. There is an entity known as the National Internet Finance Association of China which is a quasi-government that poses as a self-regulatory entity like NASD or FINRA that opines from time to time on crypto issues. Thus far, they have only been a mouthpiece for the echo chamber of government regulation.

What are they saying about regulation, Big Red Car?

Ahh, you have anticipated my next thought, dear reader. Very sharp this morning.

There are two primary government regulations that pertain to crypto:

PBOC Circular 2017 was issued on 4 September 2017 and contains two pertinent illuminations: Bitcoin is not a fiat currency which means it is a commodity; and, that all ICO (initial coin offerings) are “illegal financing activities.”

We will talk in depth about the ICO criminal issue, but it is important to recognize from the start that the Chinese are imposing civil, administrative, and criminal penalties. When one is pontificating about crypto and China know this — they  will put you in jail for coloring outside the lines. Fair warned.

There is another frame of reference that a knowledgeable person requires: like the US Securities and Exchange Commission, the Chinese Securities Regulatory Commission (CRSC) issues the Securities Law of the People’s Republic of China (2014 amended version).

So, there you have it, dear reader, the legal basis — the regulatory framework — for the regulation of crypto in China.

Yes, dear reader, the Chinese already had a law in place prohibiting illegal fundraising that carried a sentence for “more” than 10 years to life in prison, substantial fines (RMB50,000 – 500,000), and confiscation of property. This was already on the books.

PBOC Circular 2017 fleshed this out to specifically note ICOs are illegal fundraising and those who facilitate the issuance — talking to you network platforms and banks — are also guilty of breaking the law.

It is also illegal for financial institutions or third-party payment companies to directly or indirectly trade or act as a central clearance agency in Bitcoin.

This is decidedly different than say the Kik/Kin debacle wherein we are dealing with purely civil penalties — return of funds raised plus interest, financial penalties, prohibition from participating in a public company or issuing securities for some prescribed period of time.

The Silk Road guy, Ross William Ulbricht — the “Dread Pirate Roberts”, ended up in jail, but it wasn’t for the issuance of illegal securities. It was for conspiracy, narcotics, and money-laundering. He also attempted to hire some hit men to dispense with some awkward witnesses. It is worth noting that the trial judge, Judge Katherine Forrest specifically noted the value of a harsh sentence as a deterrent to other prospective criminals.

So, when evaluating the state of the Chinese regulatory environment, remember they have in their bag of tricks putting you in jail for life. Nobody at the US SEC is talking putting you in jail though the US Department of Justice can join a completely civil action and make a criminal case though this is rarely done.

The Chinese focus on Bitcoin when pontificating on crypto. Why? Because Bitcoin was the first crypto out of the cradle.

They have made some specific utterances on Bitcoin in PBOC Circular 2013:

“Bitcoin has four major features including,

(3) no geographical boundaries, and

Despite being called “currency,” Bitcoin is not a currency in nature because it is not issued by monetary authorities and does not possess the legal status of being compulsarily used and accepted. Judging from it nature, Bitcoin should be regarded as a specific virtual commodity; it does not have the same legal status as a fiat currency, and it cannot and should not be circulated in market as fiat currency.”

Why is this important, this distinction about fiat currency? The Chinese have been mumbling about issuing their own “official cryptocurrency” and regulating what they have come to call “non-sovereign private cryptocurrency.”

A word about mining

The Chinese have not criminalized or prohibited mining, but they have issued guidance to local municipalities to curtail the supply of power to such operations.

I think that sentiment speaks for itself.

“Y’all can continue with y’all’s mining, amigos. I’m just here to cut off the power. Now, y’all have a nice damn day, hear?”

Wrap it up, Big Red Car

The Chinese are taking a VAT taxation approach to cryptocurrency usage approaching it as if it were the sale of an intangible asset.

If somehow a token is used in this same fashion, then it too is subject to the VAT on the sale of intangible assets.

Banks are on their toes, by government direction, to be on the lookout for AML implications — anti-money laundering mechanisms based on the common KYC — know your client — regulatory approach. This is a very American approach.

You make large crypto transactions in China and a Chinese person will be at your door and they will not be delivering Dim Sum (they could be).

The PBOC has formed a cryptocurrency research capability to study all things crypto and blockchain. This is not an industry coop type group. This is the regulators.

The Chinese announced in February 2017 that they had conducted trials of a national platform for “bank bill transactions” meaning they are in the cryptocurrency trading business — albeit for some future issuance of a sovereign national — Chinese — cryptocurrency. This is very big news, but it seems to be overlooked.

Closing comment — the Chinese are cheaters. They are institutional cheaters under a 70-year Communist regime that has a digital warfighting capability. They are numbering and evaluating their people from “trustworthy” to “disobedient” under something called the CSCS — Chinese Social Credit System. Go read this:

It is pretty damn scary. Already millions of Chinese have had plane and rail tickets cancelled based on their being classified as “disobedient.”

The Chinese will harness any cryptocurrency info to support this effort. 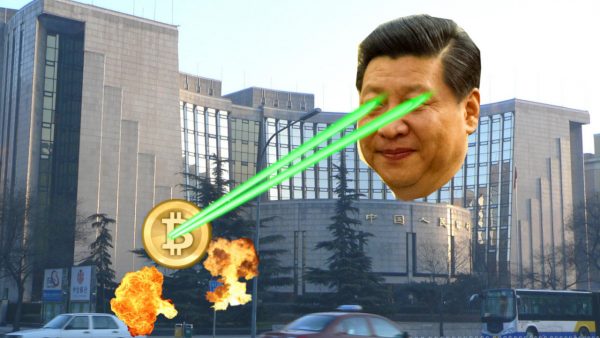 China is not the Wild West as it relates to cryptocurrency regulation. They will smile at you, but they have a healthy, vigorous, testy regulatory regime in place with a complete body of law. They will put your ass in jail for life if you mess with them. Know this.