Big Red Car here in the ATX on another glorious day. Going to be 75F and sunny. Yawn. On Earth as it is in Texas.

So, The Donald has created another controversy with his call for a “temporary” ban on Muslims entering the United States.

Apparently, many folks are troubled by this. Of course, we are living in troubled times, no? So what are we to make of it?

We have a President who is, apparently, unconcerned about the implications of immigration (Syrian refugees having been one of the groups who triggered the discussion) from the Middle East.

On the other hand, you have The Donald who is fixated on the notion of preventing Muslims from entering the United States.

In this discussion, The Donald suggests his notion is “temporary” until the government can figure this business out. In its temporariness, it would ban business visitors, students, tourists — anybody who is Muslim.

Is this really going to happen, Big Red Car?

The short answer is: NO!

The long answer is: NO!

That is also simple.

The United States is scared and the guy who is supposed to comfort us, President Obama, just gave a “Nothing to See Here, Move Along” speech telling us he’s got it under control and we just need to stay the course.

That course is strewn with a meaningful number of dead Americans and that is unacceptable.

It was not his best speech on either delivery or content. So, many are left with more fear, not less fear.

That fear is what The Donald is tapping into. It is real.

The pattern that folks are seeing is this — a lot of this terrorism is being undertaken by folks who are Muslims, under the guise of Islam, in accordance with the Qu’ran’s instructions on dealing with infidels and jihad, and by guys yelling “Allahu akbar!” Translates to “God is greater” or “God is the greatest.”

Is this right, Big Red Car?

Yes, this is an identifiable pattern. It is a fair assessment of the problem. Deal with it.

Is it the Muslims, Big Red Car? Level with us, dammit!

Dear reader, there are 1.6 billion Muslims in the world. They are of varying levels of devotion and of varying sects. Sort of like the Presbyterians v the Episcopalians. Some of whom only see the inside of a church on Christmas and Easter. Not everyone is a zealot.

Of that number, approximately half are men.

Of that number, 800 million, approximately 25% fit into the demographic which has been causing all the trouble. That’s about 200 million.

Of that 200 million, approximately 40,000 have rallied to ISIS and there are another 20,000 ISIS zealots who are where they may need to be — dead and buried.

ISIS is a pimple on the world’s ass but one that probably should be dealt with sooner rather than later. The President’s failure to deal with it effectively is where the fear is coming from.

And that fear is REAL!

OK, the answer is that part of the pattern is that the terrorists are doing horrific things in the name of Islam. Yes, that is true.

Are all Muslims doing it? No — that also is true.

The Donald is suggesting we need a pause to figure this out. He wants to halt entries to the United States by all Muslims. ALL MUSLIMS.

And therein lies the problem.

Tapping into the fear

The Donald is tapping into a righteous and real fear but he’s using a baseball bat when maybe a scalpel would be better. But it is because the fear is real that he is getting traction.

There are some anecdotal references — FDR’s rounding up the Japanese in the United States after Pearl Harbor, the decision by President Carter in the wake of the Iranian seizure of the American embassy in Tehran to deny Iranians the use of their passports to enter the United States — which make for an interesting discussion.

They are not dispositive nor are they convincing nor are they exactly comparable. Still, they are thought provoking and the folks who are looking for The Donald’s lobotomy scars need to check their own in a mirror. A pause is not an outlandish idea though The Donald may have framed it in such a manner that a knee jerk kicks in that direction.

The fear is real and until there is some plan to relieve that fear, The Donald will get some not insignificant traction on this subject because America is scared. We are fearful.

BTW, you do know that The Donald is married to an immigrant, right? He says he vetted her extensively and personally before he decided to marry her. Sounds plausible, no? This is their little cub. 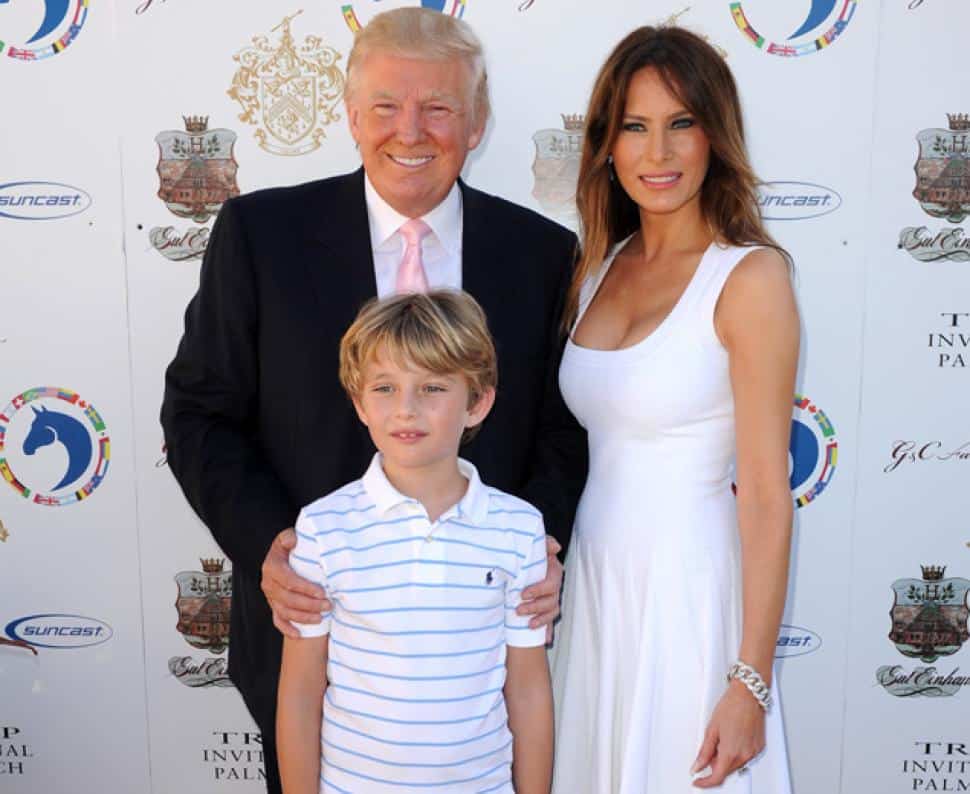 But, hey, what the Hell do I really know anyway? I’m just a Big Red Car but I also am fearful as to the implications of immigration from the Middle East. We must do something better than we are currently doing and our President is not getting it done. Fear, it will make you say  and do some crazy stuff.

11 thoughts on “Tapping Into Fear — Trump”