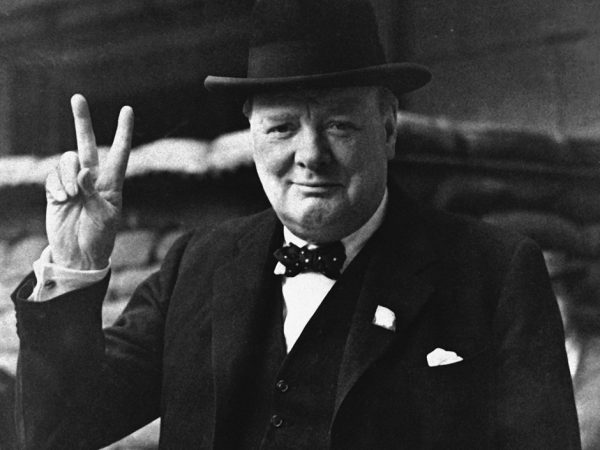 It is said that members of  the house wept openly. On the strength of that speech, Hitler is said to have reconsidered the impending invasion of England.

Churchill is reported to have whispered to a colleague: “And we’ll fight them with the butt ends of broken beer bottles because that’s bloody well all we’ve got.”

Want to hear something amazing? The damn speech was not recorded in real time. It was not until 1949 when Churchill agreed to repeat the speech that the world actually heard it.

That, dear reader, is the nature of leadership — a good talking to even when the facts behind the words may not quite meet the rhetoric.

I grade President Trump as growing into the job of being a wartime leader more and more each day. Here are the touchstones:

In case you don’t know, the Chinese are a horrific, violent, evil empire that cannot be relied upon to speak the truth on anything.

2. President Trump, acting solely on instinct, closed all contact with China on 31 January 2020. When he did, the Dems, the liberals, and the media castigated him for using it as an anti-immigration ploy, but he stood his ground.

There is no reasonable person today who wants to undo that decision — that instinctive, gut decision. Bravo.

3. President Trump assembled a world class team and marshaled the Center for Disease Control to create a task force that he empowered with the leadership of the second most powerful leader in the government to ensure the task force could cut across government organization fiefdoms.

[Side note: The CDC is a world class operation. God bless the CDC, the best in the world.]

4. President Trump has taken a machete to regulations, protocols, and practices that stand in the way of a rapid response.

5. President Trump has positioned himself front and center to communicate with the American people in an appropriately upbeat, but serious manner.

His job is to be the Reassurer-in-Chief. Well done. Well played. Bravo.

To his credit, he has provided direct access to the entire leadership element of the Center for Disease Control, the Department of Homeland Security, the Food and Drug Administration, the Surgeon General, the State Department, the Secretaries of State, Defense, Treasury, and to those who can provide a professional context to the issue.

6. President Trump has marshaled the power of American industry in much the same way that Franklin Delano Roosevelt did to become the Arsenal of Democracy in World War II. President Trump did it publicly.

7. President Trump is fighting the war on the economic front, driving the House and the Senate to slap the WutangCurse with the considerable might of the American economy.

I like almost none of the policies of the Democrats, none of the New York Assembly, and New York’s Governor Cuomo, but I stand here today to praise the nature of his leadership.

New York — primarily that portion of it that is New York City and in close proximity — is now Ground Zero.

New York has more cases than the next thirty-nine states COMBINED. Again, New York alone has as many cases of the WutangCurse as the next 39 states combined.

Governor Cuomo has the majority of the country’s problem in his state. Today alone, an additional 5,429 cases were identified.

Here are the things I like about Governor Cuomo:

1. Governor Cuomo was quick to forge a working relationship with the Trump admin.

There is no politics when it comes to saving lives. Nurses do not ask for party affiliation when they are checking you into the ICU.

2. Governor Cuomo has an excellent, measured, confidence-inspiring delivery. He takes his time; he does not rush.

3. Governor Cuomo has driven his team to think outside the box — using the Javits Center for a hospital is a nice touch.

4. Governor Cuomo called for help quickly, did it to the right man — President Trump, and was appreciative when it was delivered.

OK, here it is, dear readers. There are no perfect leaders. But fate puts the right men in the right place when the world needs them. These men emerge to show their character under the friction of the test.

I think we have two of them in the right place right now.

Closing point: What the world does NOT need right now is a bunch of whiners, carpers, bomb throwers, naysayers, mean-spirited political harpies, media ambuscaders, and pessimists.

What we need is a break, some prayers, and the indomitable spirit of the men and women who built this country.

We need the spirit of Normandy, the spirit that took us to the moon, that built this great country.

For you — put a smile on your face, in your words, in your writing. Let’s fight this WutangCurse on our beaches, on our streets. Let’s be smart.

This too shall pass. We shall prevail. God bless America and God bless our leaders.