Big Red Car here on a glorious ATX day — sun is up and bright and going to be 75F today. No snow in the forecast. Hahaha — get it, New York? [The Big Red Car can be downright cruel at times. Shut up, Big Red Car.]

So, the Big Red Car is perplexed at how ignorant people can be as to how unemployment figures are derived. We focus on some fiction called “U-3” from the Bureau of Labor Statistics.

So, today we cut the crap on how unemployment information is manipulated — YES, MANIPULATED.

Let’s work through a simple example using simple numbers that will be easy to understand. Assumptions as follows:

Simple enough even for poets [the Big Red Car has a thing for poets, a weird thing].

No problem there, right?

In marshaling the statistics, the BLS says that if a person is unemployed for some specific period of time (like six months) then they are either not looking for a job seriously or they have dropped out of the labor force. Huh?

Yes, grasshopper, that is right. A chronically unemployed person is no longer unemployed or has dropped out of the work force. That is government logic. You, like the Big Red Car, may think this is sheer nonsense but then you are a person who prefers reality to government statistics, no?

Now, the math looks like this. Assumptions as follows:

Yes, it is that easy. Drop enough people from the work force and the unemployment rate goes magically down, down, down.

If what the Big Red Car says is, in fact, true then the the labor force participation rate should show that, no? Let’s see. 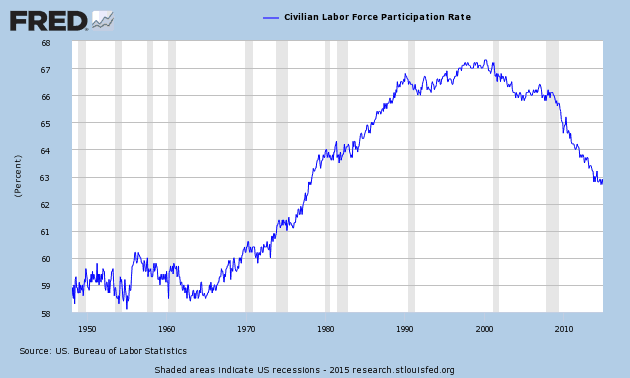 As this graph from the Dallas Federal Reserve shows, the labor force participation rate has been steadily declining since 2000 and has really been on a slide since 2008. The graph doesn’t lie. This simple manipulatino of the data accounts for almost all of the recently reported improvement in unemployment.

In thinking about unemployment in the US, let me give you one last challenge to mull over. If the jobs market were healthy and unemployment was really as low as it is nominally reported, why isn’t there some upward pressure on wages? Why are incomes steadily declining?

We are in a pickle, my friends. The labor force participation rate is anemic indicating a lot of people are sitting on the bench and the government is not acknowledging them. Wages are down. We are getting ready to legitimize 5-10,000,000 low skill, low wage workers.

If you want to get a sense of how bad, take a look at other BLS unemployment statistics like U-6 or U-7.

The folks in Washington are pissing on your leg and telling you it is raining (or in NYC, it’s snowing).

But, hey, what the Hell do I really know anyway? I’m just a Big Red Car. Be good to each other.