Big Red Car here. Well The Boss got the garage cleaned out, so now your Big Red Car can sleep in security inside the garage. But, wait, the Lexus SUV (a pampered bitch if ever there was one) is going to be getting first dibs on the new sleeping quarters. Life is not fair! But, hey, I love it anyway cause I get to commune with nature and all that jazz.

So The Boss turned a bit serious today when having a hot dog with one of his buddies. They ate at Man Bites Dog, said it was very good.

Sayeth The Boss: “One can argue the merits of the economy citing unemployment, under employment targeted statistics (black youth being one that is a huge disaster) but one cannot put a head fake on the Labor Force Participation Rate.”

He continued: “Over the long run the number of American “in the labor force” — actively seeking employment — has been a very good indicator of fundamental economic rigor. Today it is at a level not seen since the Carter years. Fewer people — expressed as a percentage of the American population in the demographic swath of job holders — are “in the labor force” since 1978. You can’t fake how horrific that statistic is truly. How devastating it is to the national psyche of sense of doom and disaster.”

You can read about it here — hyper link, y’all.

37.2%: Percentage Not in Labor Force Remains at 36-Year High

Distilled to its essence, the message is this — fewer Americans think they can get a job in this economy since the days of Jimmy Carter —– Jimmmmmmmmmy!

That’s February of 1978 which was a dark time in the history of the United States. Jimmy Carter and Barack Obama are vying for the title of Worst President EVER. It is sad.

Worse, the President doesn’t seem to be even remotely concerned about the pain his policies are inflicting on America (e.g. turning his nose up on the Keystone pipeline jobs). At least Jimmy was embarrassed about it all, not Barack. Alas.

We have an “active” job capable population of approximately 248 million folks.

Of that number, 157 million are participating in the labor force by either holding a job or looking for work.

A total of approximately 92 million folks have thrown in the towel and are no longer seeking employment. Can you believe that? Almost 40% of the US labor force has thrown in the towel in the Obama Economy. Can you imagine that and the negative impact that has on the Nation’s collective psyche and sense of worth? 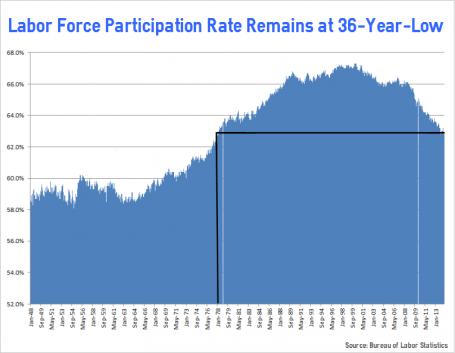 Here’s what it looks like graphically. Jimmy Carter times are here to stay and headed even deeper many economists think.