Relations between Japan and China have always been dicey since before World War II, so a new development between them is not a huge surprise.

The nature of the development in this instance is.

Japan has funded a program — as part of its COVID19 economic stimulus package — to financially support companies who move their manufacturing from China back to Japan.

In addition, the program also supports companies who move their manufacturing from China to another Asian country whose main qualification is — Not Made In China.

This comes on the heels of a very simple impetus — the realization of how much Japanese manufacturing had moved from Japan to China.

Why did they move in the first place you ask? Cheap labor. Cheap cost of finished goods because of the cheap labor, prison labor, child labor, lower environmental standards (if any at all), and cheaper materials.

It is a very timely question as Japan and China were in the middle of a big love fest with President for Life Xi Jinping slated to visit Japan earlier this month. This was a big deal. 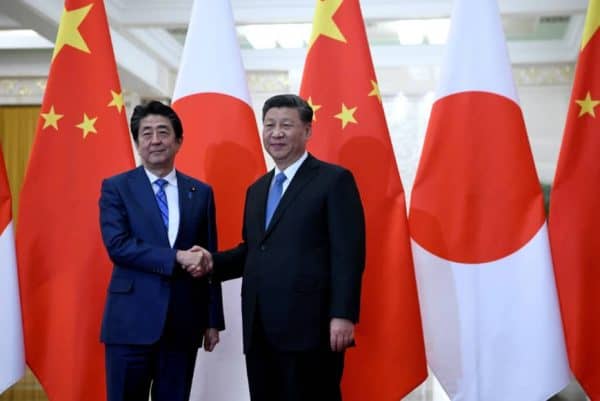 23 December 2019 visit by Prime Minister Abe of Japan to China, shaking hands with President for Life Xi at the Great Hall of the People in Beijing.

The President for Life Xi visit to Japan would have been the first visit by a Chinese President in more than a decade and there was to be a summit meeting and a tete-a-tete with Japanese Emperor Naruhito.

China and Japan have only had “normalized” diplomatic relations since 1972 and they have ongoing territorial disputes pertaining to the Senkaku Islands in the East China Sea.

In addition, Japan, like the rest of the world, has been an ardent critic of Chinese human rights abuses and mistreatment of the Uighers. China does not like criticism especially from the United States and Japan.

Japan imports from China (mainland) and Hong Kong a total of $166B and exports $168B.

The numbers are a little misleading as there is a $32B trade balance deficit with mainland China and a $34B trade surplus with Hong Kong.

China (mainland) and Hong Kong taken together is the top trading relationship for Japan.

The United States runs a $61B deficit with Japan. Japan exports to the US $135B and imports $74B.

The Japanese nation is not throwing a head fake at China or the world.

Japan is paying manufacturers to get the Hell out of China.

The Japanese are offering funding for companies to move out of China or to move to other Asian countries.

This is not a drill.

The United States needs to take a hard look at our national security as it relates to continued manufacturing of critical products — talking to you PPE — in China. It is time for everybody to get the Hell out of China.

On Monday, I spent an hour trying to find 11″ fireplace matches that were not “Made In China.” I found some.