I was reflecting on the nature of entrepreneurs on the heels of three discussions I recently had with prospective clients. I was also thinking about my two Perfect Granddaughters — Peaceful Eadie (4 months) and Tempe the Bold (almost “fwee”).

In the discussion with the founders, we wandered into the area of what hurdles must an entrepreneur overcome and caught our heel on the notion that an entrepreneur had to develop a pretty damn thick skin, be able to hear the word “NO” in several different languages, and the benefit of the programming of an entrepreneur’s life prior to sticking their stake in the ground.

This last point was why I was thinking of Peaceful Eadie and Tempe the Bold. Their mother is an entrepreneur who co-founded a company called Weezie Towels which is savaging the luxury towel vertical.

When Momma works at the kitchen table, Tempe the Bold works alongside her with her own plastic phone and keyboard. You have never seen anything as cute as T the B fielding imaginary calls that often sound identical to her Momma’s. The probability that Tempe the Bold will become an entrepreneur like her Momma? I will let you evaluate that.

As an entrepreneur — or as a prospective entrepreneur — you are held captive to the jockey, horse, course evaluation wherein the “jockey” plays trump to the other aspects. You, of course, are the jockey.

The horse is the business engine, and the course is the market. 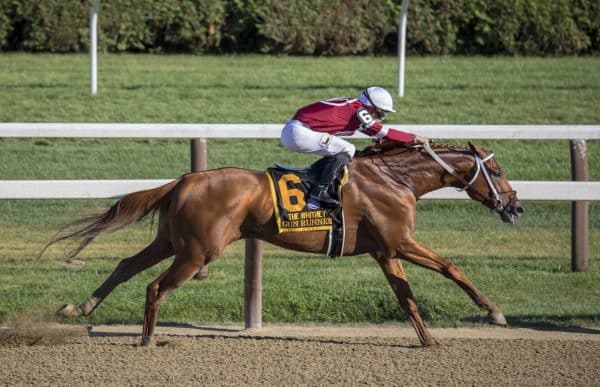 What does that jockey have to embrace mentally in order to become an entrepreneur and is it easier if you are nuts?

1. An entrepreneur has to be able to turn to the left when the entire world is turning to the right and having a lot of fun.

Initially, there will be a very small ration of fun in the entrepreneurial racket which is good because you will have no time for fun.

There will be fun at the end, but the end is a long way in the future, so you will have to build a life that is not dependent upon fun.

2. An entrepreneur having taken that turn has to persist when she realizes that the trail is not as well worn as alternatives because fewer people have taken that route.

I am focused this morning on women entrepreneurs — Peaceful Eadie/Tempe the Bold.

3. You must be able to survive an onslaught of persons — many of whose wisdom you respect and fear — telling you that fundamentally you are wrong, you personally. This whole thing becomes quite personal. Be aware of that from the beginning.

That your idea has been done by others and better. That the chance of success is so remote that it might be a negative number and that generally you are wasting your time which means that you personally are a waste of protoplasm.

4. You must be prepared to see your idea orphaned, mocked, ridiculed, and rejected.

[How many publishers rejected JK Rowling and her Harry Potter book? She wrote a synopsis in 1995 and was rejected by every single publisher she approached — the synopsis. She persisted, wrote her first book finishing it five years later, and it was rejected by 12 publishers. This may not sound like a lot of publishers, but it was every one of those who published in that genre at the time. JKR is a billionaire — she disputes this saying she is close, but has given so much money to charity that she is down to her last $850,000,000. Can you feel her pain?]

5. You must be prepared to subsist on Ramen noodles (which I first discovered in the mid-1970s whilst serving the President on a mission of some importance to the cause of freedom in the Republic of Korea — just a bullshitty way of saying I was a combat engineer lieutenant in the 2nd Inf Div astride the DMZ looking into N Korea to ensure they did not engage in mischief — I kept them in line during my time).

I have always liked Ramen noodles and if you are clever and can operate a knife, you can add things like halved grape tomatoes and sliced mushrooms (even a bit of chicken) and they are quite tasty.

6. You must be prepared to prostrate yourself before persons with Ivy League pedigrees with mousse in their hair with unshaven faces and small, grubby hands who control the allocation of funds with which to bring your baby from the cradle into the light.

Rest assured it is a demeaning, intimidating, and soul sucking experience. They are not picking on you. They are like this with everyone, but an unfunded idea is called a hobby.

You will love working with these guys, particularly if you happen to miss your numbers. Trust me. This is a lie.

7. You will have to reconfigure your idea, amputate one or two of its appendages, sell it to others in a form far less pure than you envisioned, and all of this you must do with a giddy smile in heels whilst dancing backwards.

Ginger Rogers, Fred Astaire — likely names you do not know. Google them.

At all times the statistic that VC funded businesses change out their founding CEO more than 85% of the time in the first 5 years will reverberate in your head. Listen to the voices.

8. Only then will that bitch who lives under a bridge like a troll in the crowd, the market, take note of and truly evaluate your idea. She is merciless, cruel, uncaring, and unfair.

If you are looking for a sense of fairness, stop reading right now — life is not fair and the entrepreneurial gig is one of the most unfair endeavors known to womankind — you will understand the idea of gender bias and realize that white men do rule the this slice of the world and that Venture Capital may have gotten last pick on the white men to boot. [Bit of hyperbole. There are 7 nice VCs in the business. Unfortunately, you will never meet any of them.]

You could have the best idea ever envisioned in the history of womankind and if you arrive a minute late or, God forbid, an hour early — the market laughs at you while some other lesser luminary makes a go of your idea simply because of timing. [See the above comment on fairness.]

9. Even when your idea learns to walk, there will be pain.

You may end up with Amazon, but there will be many lean years during which you will lose your hair (Jeff Bezos had a full head of hair when he incorporated Amazon as a book seller and it took him the better part of two decades to even catch the scent of a meaningful profit. In spite of the pain, JB persisted.)

Amazon was founded on 5 July 1994 in Bellevue, Washington state.

It first turned a $0.01/share profit Q1-2001 on revenues of $1,000,000,000. Big revenue, small profit. This was after 17 consecutive money-losing quarters as a public company constantly being ragged by the financial press.

During the time period until this miniscule profit appeared, Amazon bled $2,800,000,000 in accumulated losses.

Even after becoming profitable, the profits were anemic for the better part of ten years.

After that pain, it turned out well — financially — for this Bezos chap though he has taken a dump on his personal life. If I am not wrong, isn’t the old boy the richest man in the world or some such nonsense?

10. You will be underpaid, under appreciated, and will struggle with yourself.

We are paid in life with cash, ego enrichment, and self-esteem nourishment — Ooops, I mean entrepreneurs are.

All three of these important commodities will be in short supply in the beginning of any endeavor. You will be sentenced to driving truly shitty cars, small thing, that always break down at the most inopportune time.

11. You will find out that the most expensive way to do anything is to blunder forward without seeking advice from others who have done this.

Get a damn CEO coach, but get someone who was actually a founder, a CEO, and entrepreneur. Flying 1,000,000 miles in First Class is not the same thing as having had a pilot’s license.

It is much cheaper to rent experience than it is to pay full tuition.

12. There will be bone crushing pivot. There always is and you may not recognize your Frankenstein business after the pivot, but you still have to run it.

Is there any hope, Big Red Car?

Why, yes, dear entrepreneur, there is.

1. Entrepreneurship is a calling like the priesthood. In some ways, you cannot not be an entrepreneur if your soul is so imprinted. You may have to do it.

You will find out that Mr. Rudyard Kipling was right — both triumph and disaster are impostors.

2. You will discover who you are — the friction revealing the character within. It takes friction to expose our character and I promise you you will like this stranger.

3. You will look back a quarter and have that feeling in your mouth like you have a penny under your tongue (Old Wive’s Tale of how to get rid of a cold.), but you will look back 5 years and say, “Wow. Wow. Wow.”

4. For the rest of your life you will be amongst that small fraternity of persons who did not order from the menu, but made your own goulash, picked your own ingredients, seasoned it to your palate, and who held your fate in your own hands.

Persons in public places will side eye you because you will be and are different.

5. When you are successful, you may live in a house infused with the same character as you. It will be in a good neighborhood and it will be comfortable. When you work from this home, you will smile.

Shall we be a little crass? Why not. Money may not buy you love, darling, but it can damn sure rent some and also some other very fun things.

The next time you have an idea, you will own your experience and will be so much better at the whole jockey, horse, course business as to make you laugh, but you will recall you earned this at full tuition.

Bottom line it, Big Red Car, don’t have all day

Yes, I suppose it is that time.

Is It Essential To Be Nuts To Be An Entrepreneur?

No, it is not “essential,” but it is very useful.

Have a great day. If you are contemplating entrepreneurship, if you think you want to become an entrepreneur, if you soul is so imprinted — know where the path goes. You can do this, but forewarned is forearmed. Call me if you need help.

But, hey, what the Hell do I really know anyway? I’m just a Big Red Car. Smile at the next 5 persons you run into, we never know what lurks right beneath the surface in these odd times. You could be saving a life.