Big Red Car here on a slightly grayish day in the ATX. ATX just hosted the famous ACL festival and had Paul McCartney in town crooning. Ahhhh, on Earth as it is in Texas. 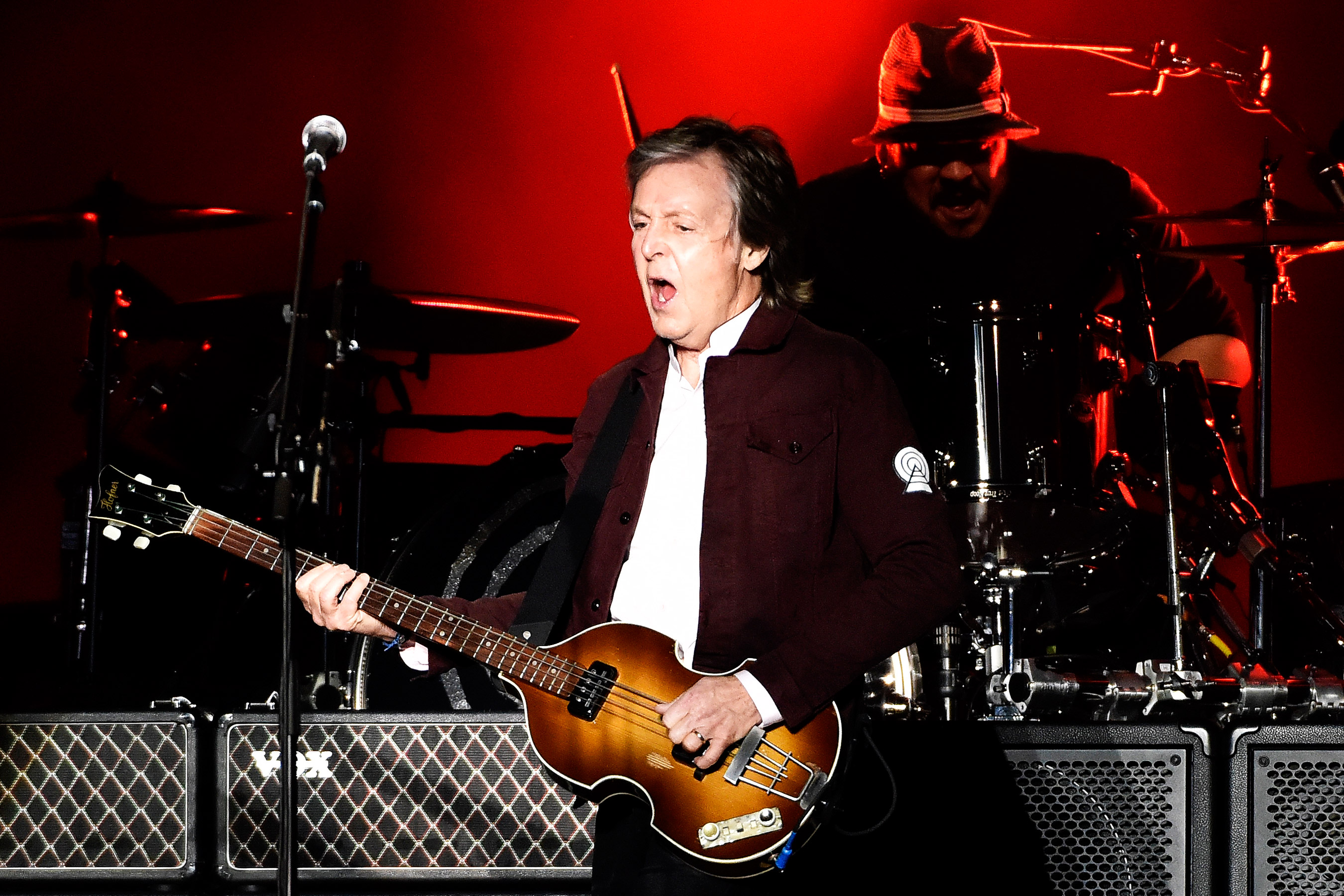 Sir Paul rocking it in the ATX at ACL at age 76 years young. Big deal in Austin, but just another day in the Live Music Capital of the USA.

So, I have been thinking about the advantages a company — startup or otherwise — has in executing its strategic plan. One of the most overlooked advantages is simply being good at executing their day to day operations.

What got me thinking about this was two things – some comments on the Amazon Advantage and a comment from a Berlin based venture capitalist, Max Niederhofer. I call him Mad Max.

He recently wrote an interesting piece which merits your review: Fear and Loathing in Venture Capital <<< go read this Read it and leave a comment. Tell him the Big Red Car sent you.

Some companies are just better at what they do than their competitors. This is often the result of superior, experienced leadership, better planning, better procedures, better people, more intense followup and a myriad of other things.

Like a lot of things, this is a matter of sweating the details.

Let me give you an example of where I see this – Amazon. When I order from Amazon the experience is easy, quick, and they acknowledge it immediately, followed by tracking my order, and telling me the status before and after it is delivered. Their system provides this comfort on every order; therefore, I like doing business with them.

Execution advantage – Amazon! [Pro tip: If you are looking at a deal or if you are putting a deal together and the secret sauce is that you are going to Out-Amazon Amazon, please get a cup of Joe, sit in a dark room, and re-think that idea. Word of warning. Those guys are good.]

How did they develop that capability? Somebody planned it, developed a flow chart, trained the people to the process, documented it — it did not happen by itself. It did not spontaneously come into existence. Somebody made it happen. You can do the same thing at your company. Yes, you can.

Leadership is what drives performance, so it is no surprise that this is the key to execution advantage. A serial entrepreneur/CEO has the benefit of experience – she’s done it before and she knows how the story ends. Knows what works and what is suspect. Also has a certain way of doing things which just works.

If you don’t have experience, what do you do? You rent if. Get a CEO coach, tie in with a mentor, join a CEO-centric organization.

Leaders have to be planners and trainers. I find that the mark of a good startup and a smooth operating company is often shown in how they onboard and train people.

As a CEO, I often drafted athletes and taught them their jobs – jobs for which I had extensive written descriptions and a set of initial objectives. Even when I had hundreds of employees, the folks who worked for me did it. It was a practice, a best practice for the entire company.

[Pro tip: If you are going to bring people on in an orderly manner and assign objectives Day One, then you have to have a similarly painstaking Performance Appraisal System and it has to tie back to the objectives. This is not difficult, but it has to be done.]

Hallmark of execution advantage – preparation to succeed as evidenced by the company itself in how it hires, onboards, trains, and holds people accountable.

I always tried to hire the best people I could, but I also had great luck with developing talent both directly from the outside – hiring the top woman grads of the University of Texas finance department – and promoting from within.

When you do the same thing over and over — sales cycle, talking to you, amigo — you can streamline it by creating a graphic and by identifying all the bottlenecks and friction points.

I helped a lovely company streamline its sales cycle and the result was a huge increase in sales because the CEO was the bottleneck. He began to delegate and voila! The company began to sell at the speed of light because they found and eliminated their bottlenecks. The CEO was happier.

When you document your operating procedures, you can streamline them. OK, we already said that. But, you can also use that graphic to train and to model where you are going to mine the data to measure progress.

I have mentioned The Checklist Manifesto many times. It is required reading for anybody who is even remotely interested in or involved with running anything.

If you have not read and embraced it, shame on you. OK, just go buy one. Let me park that “shame” baloney. No shame on you. Hell, you’ve been busy. But, really, get it and read it. If you are a CEO, buy a copy for everyone.

Go read this about the power of checklists.

The Power of Checklists

In the military, there are elite units which can be trusted to get the mission done regardless of the level of adversity.

These elite units usually have slightly better leadership, better training, maybe personnel, same equipment, but it is the combination of the battle drill – the standardized things you do when you run into a “situation” – plus the repetitive level of training which is the foundation for success.

One of the best challenges I had as a young officer was taking over a combat engineering company which had failed to pass its ARTEP (Army Training and Evaluation Program) annual test — FOR FIVE YEARS. This unit had a highly critical mission in the event the balloon went up.

Needless to say, there was a pyramid of heads of those who had been relieved through the years from the company commanders to the battalion commander with the brigade commander’s head in the noose.

I turned that company around by changing out a lot of people and then re-building it from the fire teams to the squads to the platoons to the entire company. I went in like a hurricane and had the motor pool go through all the equipment for readiness. Supply got a good kick in the ass. The mess hall was turned upside down [good chow covers a lot of evils].

One other benefit was the company culture – esprit de corps in the military – took root and what I wanted and expected was baked into the company itself. I started the culture fire; they maintained it. My job then became to not allow anybody to piss on it.

Construction equipment – dozers, front end loaders, cranes, dump trucks were 37% “up” when I arrived. Within sixty days, they were 98% up. Had to beg, borrow, steal replacement parts, had to work 24/7 — literally — repairing stuff, but it got done because I set the standard. I was unyielding. I was not popular.

That unit not only passed its ARTEP, but made 100% which was the highest score in the entire Army that year.

Creating execution advantage will not be easy. The enterprise will not just do it. In business, in the military, YOU DO NOT GET WHAT YOU EXPECT, YOU GET WHAT YOU INSPECT.

I used to go down to the motorpool and make the motor pool sergeant and his staff operate every piece of equipment. It would take an entire day to inspect. Made them run the chainsaws, crank up every blasting machine. But, they got it done.

Execution advantage will not happen by itself.

Whatever behaviors we reward, we will get more of. Sometimes, we need to remind ourselves that it is really that easy.

I used to create a talisman which was a physical manifestation of having caught somebody doing something hard well. I would award it in front of the entire company. It was an eagle on a marble base.

I was hard on having the books closed within three days of the end of a month. I wanted the data to be timely.

When I caught an accountant in the office early on a Saturday morning – my time when I used to do my best thinking and planning – I handed them $500 in crisp bills at the next all hands meeting. I didn’t explain why, but told the assembled masses to ask the person. The story spread like dysentery. Soon, I was getting the numbers in three days.

Sometimes, you have to harness a little guile.

Reward whatever behaviors you want to see repeated.

A lot of people think that culture revolves around a keg on Friday nights – bad idea for a number of reasons. It does not.

If you develop an execution advantage, it will seep into your culture. You will find out that it starts in sales or operations and seeps into accounting.

People want to win. Execution advantage is winning. Give the people what they want. Lead them to the Promised Land.

So, there you have it, dear CEO. Think about it. Can you create an execution advantage in your company? Hell yes. Cause you are a fearless business assassin.

But, hey, what the Hell do I really know anyway? I’m just a Big Red Car. Pray for Florida. Michael is coming and he’s pissed off.