The military is an organization designed to operate under the most trying situations — combat with America’s enemies. It is a hard warrior culture.

Men are given command of meaningful warfighting assets — aircraft carriers, fighter wings, divisions, landing forces — within a chain of command that goes both up (superiors) and down (subordinates).

Any commander knows this reality when they receive command — they are given it by their immediate superior.

When I commanded a combat engineer company, the battalion commander handed me the company guidon and empowered me to run the unit within the guidelines of his orders.

If I had a question, I asked the battalion commander. If he wanted me to do something, he gave me an order and I then passed it along to my platoon leaders, the first sergeant, and the men. We then accomplished the assigned mission.

If I had a beef with the battalion commander, I was welcome to state it, but once he made a decision, I saluted and carried out the order. If I did not accomplish the mission or if I refused to undertake the order, I expected to be relieved.

The Army, the military, only works in times of distress if and only if subordinates carry out the orders of their superiors.

A subordinate commander has a responsibility to inform his superior as to the status of  any mission on a continuing basis.

The USS Theodore Roosevelt is one of ten of Nimitz-class nuclear powered aircraft carriers. It is at the core of an attack carrier group and is a powerful extension of American force. 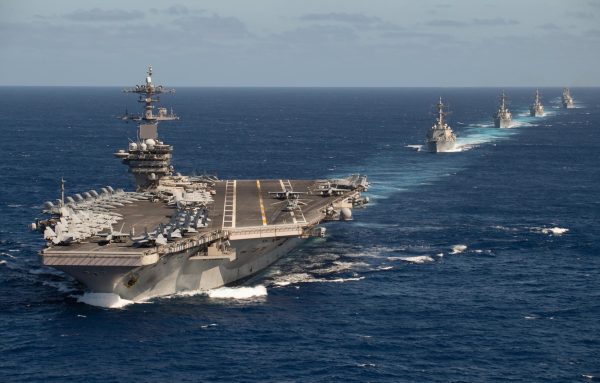 If the Teddy Roosevelt shows up in your neighborhood, you are likely to be more careful as to table manners and which fork you use to eat shellfish, because it can rain awesome firepower on your head. It can be a powerful behavior modification driver.

Conversely, if the Teddy Roosevelt is laid up — not able to get in the fight — this is a very serious consideration as it is 10% of America’s Nimitz fleet.

It is not a smart move for a commander of such a lethal weapon system to broadcast far and wide that his ship is laid up because of COVID19.

It is not the issue of whether his men are sick or not — every commander is concerned about his men, by all accounts this commander was a good one — it is that he broadcast the readiness of his ship — a classified matter — to persons outside the chain-of-command.

By all accounts the commander of the Teddy Roosevelt, Captain Brett Crozier, was a good commander.

The US Navy does not give command of an aircraft carrier to anybody who is a jakeleg.

Crozier is a 1992 Annapolis grad, Naval aviator — the best pilots in the world. He flew F/A-18 Hornets.

He has a master’s from the Naval War College in National Security and Strategic Studies.

After completing the Naval Nuclear Power training program, he served as the Executive Officer of the aircraft carrier USS Ronald Reagan.

This guy is and was a stud, likely to have become an Admiral after this tour of duty.

So, what did Captain Crozier, commander of the USS Theodore Roosevelt, do to get relieved of his command?

Captain Crozier was confronted with an outbreak of COVID19 while his ship was tied up at Guam.

He struggled with how to deal with this and decided to write a “memo” to forward a request to off load his sailors and to shelter-in-place on the island of Guam because in his judgment the notion of attempting to maintain “social distance” on the warship was not practical.

The island of Guam had already notified the US Navy that it did not have adequate hospital space to undertake the mission.

The memo — which ended up being published in the San Francisco Chronicle — was not addressed to Captain Crozier’s direct commander, who as things would unfold, was located a mere ten feet from him on the same ship.

Instead, Captain Crozier released his memo to a list of twenty-two persons, some of whom were not even in the US Navy, thereby publicly revealing the combat readiness status of the USS Theodore Roosevelt, a classified matter.

Upon learning that the Captain had not forwarded his communication to his direct superior, had released it outside the chain of command, had released it to civilians, and had revealed the ineffective combat status of one of ten US aircraft carriers — the Secretary of the Navy expressed his “loss of confidence” in the commander of the USS Theodore Roosevelt.

“Loss of confidence” is a death sentence. Two days later, Captain Crozier was relieved of command and ordered off the ship.

OK, here is the bottom line:

Commanding a nuclear powered aircraft carrier that is forward deployed in the Pacific is not chopped liver. It is the point of America’s spear.

Commanders of such powerful war fighting systems are expected to have good judgment.

Commanders operate within the chain of command. They deal directly with their superior, particularly when that superior is aboard the same ship.

Commanders do not take their beefs up with the public, even if the chain of command had had a chance to address the problem.

The combat readiness of a nuclear powered attack aircraft carrier is a highly classified matter and may never, ever be revealed to the public or our enemies. Ever.

Commanders are responsible for whatever they do, fail to do, and are not allocated any Mulligans. You fuck up, you get relieved.

It was a righteous move to relieve Captain Brett Crozier of command of the USS Theodore Roosevelt.

He knew the rules and had followed them for more than 28 years. That’s how he got the job.

If he did not realize that the US Navy would look askance at failing to follow the chain of command, for revealing classified information to the public — he was the wrong man for the job from the very beginning.

Command in the military is a sacred trust. You are responsible for mens’ and womens’ lives. When you do not follow the rules, the other elements of the military do not know what you will do next, sailors may die.

Do I think Captain Brett Crozier is a “bad” guy? No. He fucked up and he has to own that fuck up.

To the USS Theodore Roosevelt: fair skies, following winds, sail on for America.