While the United States is providing support to Ukraine as the Arsenal of Democracy, is a military planning and intel ally, and is the leader of NATO, there is a “realpolitik” element of this hot mess that requires airing out. 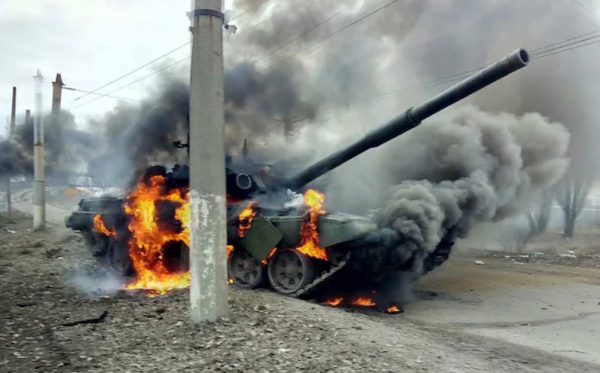 My favorite view of a Russian tank.

Yes, indeed. Allow me to lay the foundation:

The latest incident in Russia’s pain-in-the-assery is its unprovoked attack on its peaceful neighbor, Ukraine, resulting in a gargantuan number of deaths and massive destruction.

Russia is comical in its buffoonery trying to justify this invasion. Folks, this is the year 2022 and Russia is acting like a medieval, Dark Ages band of thugs killing babies, children, mothers, women, and old folks whilst bombing and missiling (made up word) civilian targets and infrastructure.

It is time to end this circus.

2. The United States is the putative leader of NATO which is the primary military opponent of Russia and the countervailing force against Russian aggression.

Ukraine would love to join NATO whilst Sweden and Finland have both just slipped out of their wedding gowns, spritzed some perfume behind their ears, and are excitedly getting into bed with NATO themselves. Bravo!

Side note: The Russians said “there will be consequences” to Sweden and Finland. Yeah, right.

3. The US provides the majority of the funding and leadership for NATO.

The Europeans have been getting an almost free ride on the American gravy train since the end of World War II.

The Marshall Plan is over, Euros.

4. The primary bottom line safeguard against Russian aggression is the American nuclear arsenal. Repeat that, please.

5. The US has a strategic national interest in Russia being suppressed, dismembered, and defanged.

Look, the whole world is best served by defanging Russia. This is an elemental confrontation between good and evil. Pick a side and work for that side.

[Scourge of Inflation Reality: That number is being eroded by at least 10% by inflation, unanticipated, but very real inflation.]

7. The Russian army, the vaunted Russian army, is a shit show. In a fair fight, the Ukrainians whip their asses every day of the week.

Complete surprise to the Four Day War Team (Russia) and the US who had it pegged for a week. Remember that fact. Our intel sucks.

This is our fight whether we are funding a proxy or a direct participant. It is also a moment in history in which we may have a lucky outcome and literally eliminate the evil nation of Russia.

Where are we going with this, Big Red Car?

OK, dear reader, here is the thesis sentence: It is way cheaper and safer to let Ukraine defeat Russia than it is for NATO/United States to get directly into the mix.

The US has provided less than $18,000,000,000 in direct military aid to Ukraine much of it being weapons and ammunition. [We have provided another $35B in humanitarian aid.] 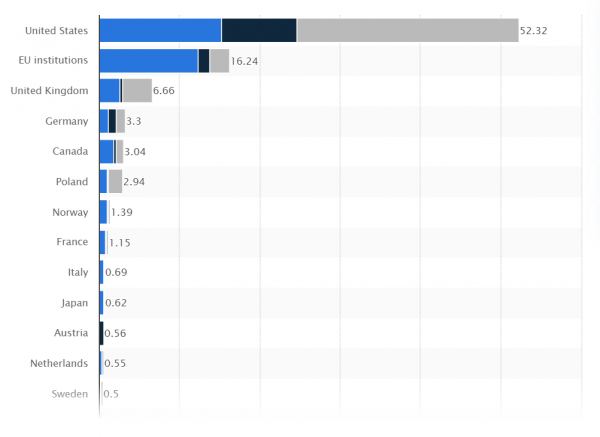 This chart is in Euros, dear reader.

While $18B is not chicken feed, it is a small fraction of what the US spends on defense. [I am using numbers from the US Dept of State. I have seen numbers indicating US military support is as much as $27B, but I cannot vet those numbers. The argument is the same regardless of the real numbers.]

It is a big chunk of what Russia spends on defense.

1. It is far, far cheaper — in both treasure and blood — to slap Russia with the American checkbook and the Ukrainian bayonet than it is to go to war.

Even if we sent Ukraine $50B/year for the next three years, it is a small fraction of what the US would spend during that period on defense.

Better real world investment? Forgiving $400B of college loans or funding the Ukrainians to the tune of $150B?

2. If Ukraine is spending/receiving that kind of support, then Russia either has to step up the pace of its now failing economy or somehow figure out how to win on a comparative shoe string.

3. Just like the Soviet Union — the USSR — was a financial casualty in 1991, the Russian Federation can be reduced to a militarily bankrupt nation if we just continue to support Ukraine.

What else can we do, Big Red Car?

1. We can drill, baby, drill and get oil production so high that the OPEC+ production level — cutting production by 2,000,000 barrels, sure to make gas prices surge ever upward — is irrelevant to US and global energy pricing.

This is a strategic posture as it will also bleed Russia and the US would serve its own interests and the peace of the world by driving American energy production through the roof and prices down.

2. We can make it clear to the Ukrainians (and the Russians) that we will continue to support them until there is a geographical resolution to the invasion of Ukraine by Russia.

3. We can make it clear to the Russian people that the economic sanctions continue even after Ukraine ejects the Russians until Putin is no longer in power.

4. We can make it clear to Russia that they will pay reparations for the damage done to Ukraine.

Bottom line it, Big Red Car – we have lunch plans

OK, let’s bust the Russian Federation in Ukraine just like Reagan broke the Soviet Union back in the day — let’s whip them with our checkbook.

This is smart money if it results in peace and the elimination of Russia.

Give it a thought. Time for some hard headed realpolitik. 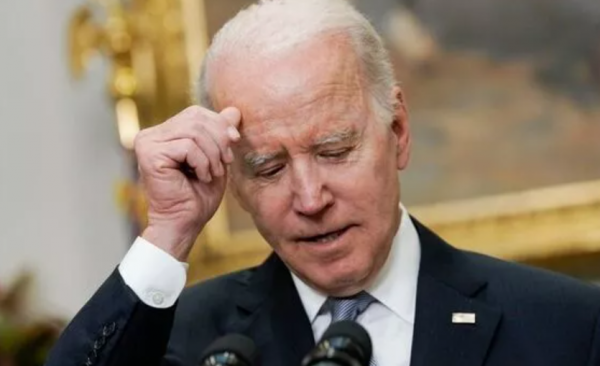