There is some controversy swirling about in Washington, the District of Columbia, pertaining to the President — this fellow Trump, Donald J Trump, guy who unexpectedly won the election back in 2016 — and the Congress. I think — check me on this — that the Democrats in Congress want to remove the President from office.

Odd sort of thing. We’re a year from an election. Why not let the ballot box do that?

Oh, well. But, I did stumble on something so unusual that I thought I needed to bring it to your attention.

It pertains to the Deep State and the Inspector General of the Intelligence Community, this guy — Michael Atkinson. 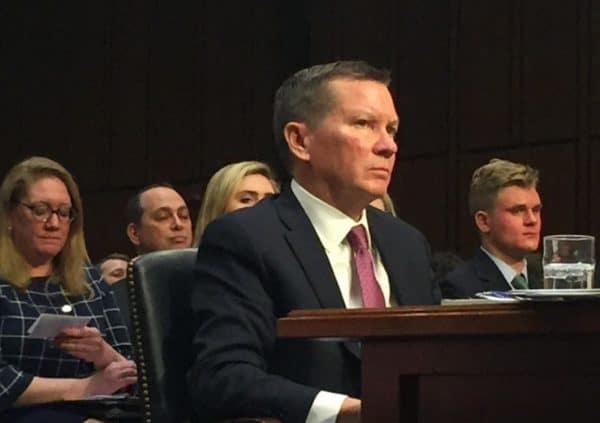 The Deep State is an imaginary — maybe no? — layer of folks who have wiggled deeply into the corpus and organs of our government, fastened themselves thereto like barnacles, and pride themselves on outlasting any elected administration.

The President may serve for eight years, but the Deep State lasts forever. In this fashion, they pay lip service to the admin all the while executing on their own peculiar vision of how things ought to be.

Some say up to removing a President who threatens to wrest their power from them. It is true in all branches of the government.

So, one is forced to ask — Who is the Deep State? Where do they reside? Are they even real?

So, I bring to you the story of the Intelligence Community Inspector General, Michael Atkinson.

By all accounts, Mike is considered a great guy by his peers. More about that later.

He was a lawyer in private practice for eleven years before entering public service with a fifteen year stint at the Department of Justice where he tried cases as a trial attorney and an Assistant US Attorney in DC. Along the way, he received the Attorney General’s Award for Distinguished Service for a corruption case he handled. Got into the national security racket when he moved to the DOJ’s National Security Division which threw him into contact with the Intelligence Community.

In August 2019, President Trump appointed him to be the Inspector General of the Intelligence Community — all the intel organizations under the Office of the Director of National Intelligence.

So, the Inspector General of the Intelligence Community, what is that?

Inspectors general exist to allow a complainant to report some malfeasance or misfeasance within the relevant body to the higher ups. Part of this is intended to protect such complainants from retribution. The Inspector General’s office had a bad reputation for dysfunction. It was a clean up assignment when Mike took to it.

What did Mike do, Big Red Car?

Hold your horses, dear reader, we’re getting to that. You need some patience counseling. Sheesh!

So, one of the first things Mike did was to take a hard look at the IC’s whistleblower program. He reviewed and revised it — including the forms on the ICIG website — and all was good.

Mike said he would “encourage, operate, and enforce a program for authorized disclosures by whistleblowers within the intelligence community that validates moral courage without compromising national security and without retaliation.” Preach, Mike Atkinson!

Toward that objective old Mike revised all the forms that whistleblowers were to use. Put them up on the ICIG website for all to see how the process worked. Transparent and full throated.

Then, along comes a chap known as Whistlebritches No 1, complaining of improprieties in a conversation between the President of the United States of America and the recently elected President of Ukraine.

[Stop calling Ukraine THE Ukraine. It’s just Ukraine and the Ukrainites are getting testy about it. They also don’t like THE Crimea which they used to own until that little shit Putin violently snatched it from them under the eyes of the whole world and the Obama administration. But, I digress.]

As I said, Whistlebritches No 1 comes forth and first chats up the issue with the CIA’s office of general counsel. General counsel mentions it to the Department of Justice and the White House counsel.

Sort of an awkward move for Whistlebritches No 1 as he is reporting an irregularity at the White House.

So, Whistlebritches visits the office of the Inspector General of the Intelligence Community who apparently advises him that he needs to go the “whistleblower” route.

This is where it gets a little weird.

When the IGIC receives a complaint — on the appropriate form as provided on the website of the IGIC — he evaluates the complaint, visits confidentially with complainant, snoops around a bit, and decides whether the complaint is “credible” and “urgent.”

If the complaint is both credible and urgent, then the IGIC must by statute forward a copy of the complaint to certain committees in the Congress — Senate and House.

One of those committees is the House Permanent Select Committee on Intelligence, currently ramrodded by a chap named Adam Schiff. You may recognize that name as being a man who is often cross with the POTUS and vigorously voices his vexation.

Can we move this along, please, Big Red?

1. The ICIG, upon investigation, decides Whistlebritches No 1’s complaint is both credible and urgent. This is big, y’all. Trust me.

2. It also becomes clear that the basis of the complaint is NOT first hand knowledge — the type of knowledge one is required to provide to prevail in a court of law.

3. Whistlebritches No 1’s complaint doesn’t conform to the actual forms provided on the ICIG’s website which require this first hand knowledge. The website says that if you don’t have first hand knowledge then your complaint will NOT be deemed as credible or urgent, thereby failing to trigger the requirement to forward the complaint to the Congress.

Sort of a big thing, no?

4. So what does Brother Atkinson do? HE CHANGES THE FORMS ON THE ICIG WEBSITE TO NO LONGER REQUIRE FIRST HAND KNOWLEDGE — game, set, match ICIG.

5. Now, Brother Atkinson says, “I shall forward this ‘credible and urgent’ complaint to the Congressional committees and justice will be done!”

8. Brother Atkinson ignores the admonition from the Department of Justice and forwards the complaint to the Senate committee and the always entertaining Chairman Adam Schiff who proceeds to explode.

It will turn out that Chairman Schiff is play acting as he has known about the Whistlebritches No 1 complaint for months, his staff has been advising WB No 1, and he, Wily Adam, has been Tweeting about it for a month. Nice acting job, Chairman Schiff.

Yes, the ICIG ignores the bleating of the Executive Branch’s (of which the Intelligence Community is part) lawyer and defies that written DOJ ruling.

And, then Brother Atkinson provides himself to be grilled by the House Permanent Select Committee on Intelligence last Friday.

Well, here’s where the cheese gets a little stinky.

Somebody asks — Who changed the forms on the ICIG website and why?

Turns out Brother Atkinson did. Admits it.

Well, upon his own. Admits this.

Why? Here’s where it really gets stinky, dear reader. Hold your nose as you read on.

Because Brother Atkinson had already received Whistlebritches No 1’s complaint and didn’t like the foot fault on the first hand knowledge requirement, so he changed it. Admits that also. Huh?

Plus, he backdated the changes to make it look like Whistlebritches No 1’s complaint was processed under the “new” forms. [Remember Brother Atkinson had revised those forms once already when he came into office. This was the second revision in a year. Pretty damn blatant, no?]

He admits all of this during his testimony in front of the House Permanent Select Committee on Intelligence as run by the inestimable Chairman Adam Schiff.

It gets a little stinkier:

1. Not only did Brother Atkinson change the forms to suit the Whistlebritches No 1 second hand narrative, backdate them, defy the DOJ and the DNI — he failed to sufficiently investigate the matter to even ask Whistlebritches No 1 — “With whom have you worked in crafting this lovely bit of accusatory literature, my good man?”

2. Would have been a damn good question because it turns out that Whistlebritches No 1 conferred with the House Permanent Select Committee on Intelligence’s legal staff — meaning lawyers who work for Chairman Adam Schiff and the Democrat majority. Same guys who are going to be investigating the complaint. The investigators helped craft the complaint that spawned the investigation. WTF?

3. Whistlebritches No 1 not only fails to tell the ICIG — Brother Atkinson — of this oversight, but he fails to fill in the specific portion of the form that elicits this precise information. ICIG Atkinson doesn’t say, “Hey, Whistlebritches No 1, you forgot to fill out this box. Put a pencil to it.”

4. Inspector General Mike acts aghast at this revelation — that Whistlebritches No 1 had coordinated with the Congress committee staff. Academy Award performance.

5. Turns out Mike is a generous sort and overlooked a couple of other potentially critical data points — other than the no first hand knowledge requirement and the consultation for a month or more with the Schiff partisans — like Whistlebritches No 1 is a registered Democrat, was a political operative in a former life, despises President Trump (sort of like the whole FBI Agent Strzok thing), and has a current relationship with a Dem vying for the nomination of his party.

And, that, dear reader is how the Deep State operates in real life.

They bash the entire apparatus to fit their own narrative and to support their own ends even when it comes to overturning the election of the President of the United States of America.

Who needs a second hand account when you can see the actual call? Nice volley at the net, Mr. President. Well played, indeed.

Don’t get me wrong — I am opposed to the Deep State. I want it exposed, rooted out, eliminated. They did the same stuff to Jimmy Carter. Played possum on him.

“You can’t handle the truth!”