Big Red Car here fresh off watching Snow White and the Seven Dwarfs and Donald Trump pandering to the veterans. [Full disclosure, The Boss is a veteran and a graduate of Virginia Military Institute, the son of two veterans.]

Nice day — Hell, great day — here in the ATX. So good I almost don’t want to tell you about it. It is 53F headed to 75F this afternoon. Sunscreen, y’all. Sunscreen.

So, the Big Red Car is just worn out by all the bullshit associated with the primaries and the Iowa primary on Monday can’t get here quick enough.

Today, the Big Red Car is going to be on a rant about being exhausted by the primaries. Sorry.

Snow White and the Seven Dwarfs

Everyone played true to form and we got to see why nothing ever gets accomplished in the Senate watching Senators Cruz, Paul, and Rubio (alphabetical order, y’all) debate the minutia of belly button lint.

I wish the moderators would just ask policy questions and stop with all the “gotcha” nonsense. I like the bimbo aura of Megyn Kelly moreso than her journalistic chops. She’s a very attractive bimbo. Just sit there and smile already.

I am so glad the debates are over. I am exhausted.

Jeb Bush and the GOPe

Jeb Bush is over and done with. Please just go away. Now. On Monday, when he comes in 16th in Iowa, the truth will be known. He’s just not the guy.

The GOPe needs to clean up the detritus — the flotsam, the jetsam, the detritus, the scree, the offal, the garbage — and go home. Their boy didn’t rise to the occasion and won’t. It’s over.

No amount of Super PAC $$$$$$$ is going to perfume that turd. Sorry. Put your checkbooks away and go roll some widows and orphans.

Donald Trump and pandering to veterans

Let’s get this out there and let it stink: Donald Trump was a Viet Nam War Era draft dodger par excellence.

His delicate little tootsies suffered from bone spurs. And, as you well know, one can’t be expected to soldier on bone spurs. Particularly when you have delicate feet and sensibilities.

Can we just get some honest to God veterans to run for high office?

I am so sick and tired of faux tough guys who want to rebuild the military who when they had their chance were too damn delicate to serve or were otherwise engaged in law school or divinity school. Sheesh!

I am sick and tired of biased, personal agenda driven journalists posing as “fair and balanced” journalists. Y’all are shitheads who are preening and self-aggrandizing at record levels. Give it a rest already.

Hey, Megyn Kelly, you realize you got the Fox job because you’re a hot blonde, right? You knew that, right? If that makes you a bimbo — which the GQ spread left no doubt about, sugar — then deal with it.

I don’t know about you but this picture screams out, “SERIOUS JOURNALIST!” Hey, I love it but I don’t quite embrace the serious journalist moniker. Could just be me. 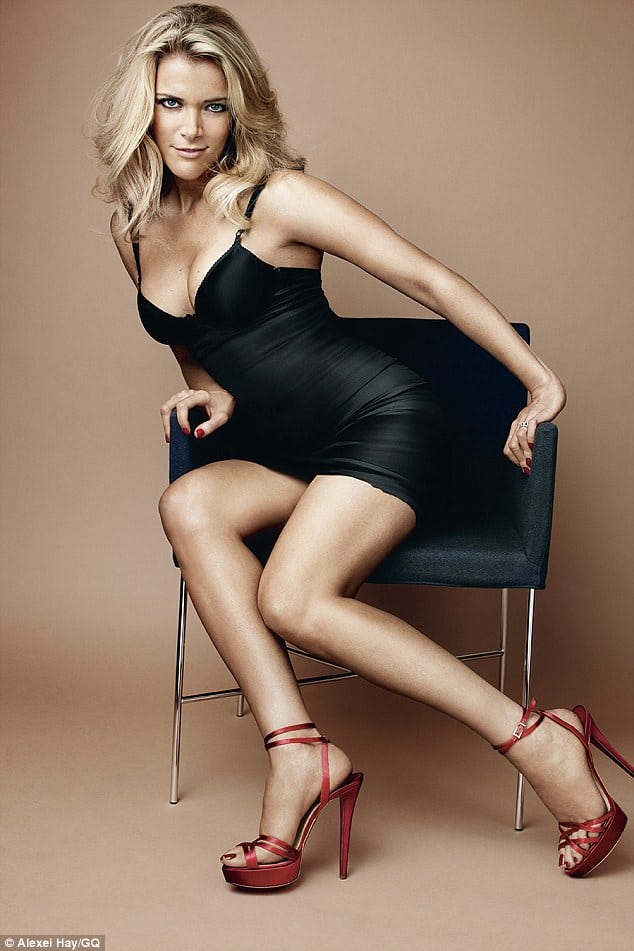 Donald Trump has made you as much as you made him. Send him a Valentine’s Day card and make peace. It’s been great for both of y’all.

But, you’re still a bimbo and that’s not a bad thing. It just means you’re doing the best you can with what you’ve got. No harm, no foul.

I am glad that Donald Trump walked on the last Republican debate not because I care a whit about Trump but because, finally, someone had the cojones to call out the media.

When the chips were down, Roger Ailes and Fox News and Bill O’Reilly were begging Trump to return because they realized, “Ohoh, we gotta sell some stinkin’ advertising, Lucy. How we gonna do that with no Trump?”

And, O’Reilly, sheesh! You are pathetic begging the guy and calling in a freakin’ milkshake chit? Really?

Get a hotel room, O’Reilly.

So, there you have it. Flames out NOW! Sorry.

Oh, yeah, Trump wins Iowa and Cruz comes in second and they go to New Hampshire with Trump riding the Big Mo!

But, hey, what the Hell do I really know anyway? I’m a Big Red Car.