Further to the blog post I made the other day as it related to the tech worker union situation at Kickstarter and BuzzFeed, I had a couple of very informative emails from folks in the trenches and I’d like to expound on several things.

Kickstarter Union — Woke Or A Joke?

First, I stand by my assertion that the issue of tech worker unions is driven by the full employment economy we find ourselves in, but there are a myriad of other considerations. Here’s what I think is going on:

1. No question that full employment is a driver. The power is shifting from employers to workers with full employment. We see this in the JOLTS report. 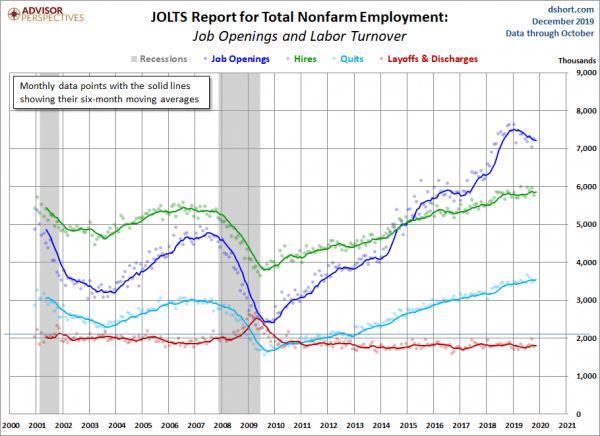 Thanks D Short and Advisor Perspectives. Thank you.

From a macro perspective — broader than just tech — we continue to have more job openings than we can fill (and we have filled a lot of jobs); we have a very flat number of layoffs and discharges, but the number of people quitting their jobs is rising and has been since 2010.

What this indicates is workers are quitting to take a better job. How do you define a better job — compensation, increased responsibility, better company, better working conditions, shorter commute?  Some of these these are things unions promise they can deliver.

2. There is tons of bad behavior in the marketplace wherein VC funded business have begun to re-trench.

Look at SoftBank funded deals that have been shedding thousands of jobs starting with WeWork.

I use WeWork and SoftBank because they are easy to find, but SoftBank has also seen Zume (robot pizza) lay off 360 workers, Getaround (car-sharing) 150 workers laid off, Oyo (hotel operator) 1,800 laid off with another 1,000 in the wings.

These kind of layoffs — often with no warning — understandably make tech workers gun shy and uneasy. These layoffs are, arguably, created by bad VC behavior, giving CEOs too much money, and thereby encouraging bad behavior.

Did they try to scale too quickly? If so, does a company, a CEO, a Board, a VC get to balance this on the backs of the workers?

3. The days of embracing a rough-edged job or a lesser paycheck on the promise of equity seem to have passed.

This is also reinforced by legal developments in which the “gig economy” is struggling to find its footing in an increasingly less sympathetic “contract worker” environment.

When Uber got crosswise with California, I remember saying that Uber would lose that fight as the issue of contract workers was a well-litigated legal issue. Turns out to have been correct.

In fact, many legislatures are going too far on the issue of contract v full time workers — what lies in the balance is benefits. Legislatures are very sympathetic to workers, because workers are VOTERS.

5. There is a lot of startup bad behavior in which excesses have created absurd risks for employees — WeWork is a likely whipping board again, but companies like Uber and the other unprofitable unicorns are all subject to those kind of considerations.

A tech worker’s job may be in jeopardy if they pick the wrong charismatic CEO or unicorn for whom to work.

Worse, that SOB walks away with a parachute or a boatload of equity if the deal craters.

6. Unions are out beating the bushes because they see tech workers who are not conversant in the employer-employee market. Workers are asking for things that are a part of every collective bargaining agreement signed for the last 25 years.

The unions have seen their power, their membership numbers, their importance decline for the last 50 years and tech workers represent a new slice of the pie. The unions are coming for tech workers as low hanging fruit.

7. The issues that tech workers are focused on — after being educated — are not unreasonable: clear job duties, corporate performance transparency, due process in termination, fair compensation, benefits (health insurance, dental, vision, life, 401K), working conditions, performance appraisal, equitable pay from a gender perspective, advancement opportunities, diversity and the opportunity to engage with management collectively rather than individually.

Lots of companies are still enmeshed in the idea their culture makes up for some of these fundamental considerations. Free Thursday lunches are no substitute for due process if you get terminated for cause because your supervisor doesn’t like remote workers when you were hired to work remotely in the first place.

8. Unions know how the game is played and how to engage with management that is not operating within the constraints of the law and the National Labor Relations Board.

These unions know exactly what they are doing. They know how to pitch a union — union workers in every industry make more money, have better benefits, win more employment disputes — and how to face down a reluctant management.

In most instances, even places like Google, the management does not know nearly as much as union organizers know about how the game is played. Read up on how the National Labor Relations Board works.

[Pro tip: the NLRB is quite employee sympathetic. Know this going in. The NLRB doesn’t care about the brilliance of your go-to-market-strategy and they didn’t go to Harvard, Stanford, or MIT. They don’t care who your VCs are.]

9. Management is often woefully unprepared to tackle these problems because they are inexperienced managers or they take a pugnacious stance. This further exacerbates the confrontation. Worse still, some of these knuckleheads even directly confront and fire union organizers — a certain way to attract the attention of the NLRB.

You do realize this behavior give the workers another reason why they want a union.

10. Workers want an upfront assessment of what risks they are taking when they take a job these days, something VC funded companies do a particularly poor job at if they even try.

Once a company’s workers decide to discuss the formation of a union, they need to conduct a quick “card check” whereby they confidentially distribute cards to gauge the likelihood of a unionization effort succeeding. In the case of the BuzzFeed example, this ended up being a 90% card check — and the BuzzFeed management still tried to quash it.

A pretty good rule of thumb is that if a card check shows a 30% support level at the first pass, there will be a union.

The product of a successful union effort is a collective bargaining agreement that addresses the issues that drove the workers to want to form a union in the first place.

[Stop: If you are a CEO and don’t want a union, go get a model collective bargaining agreement, read it, measure your own company right now in comparison to that agreement, and respond to every point it contains before the workers conduct a card check. If the workers have no reason to form a union because they are happy with their deal, then the union cannot bring anything to the table and there will be no union dues.]

There is a lot of pissing and moaning about how the formation of a union destroys trust between the workers and the management.

Please stop with that nonsense. The world is divided between those whose names are on the cap table and those who are not.

I predict that unions and collective bargaining in tech are here to stay. Those who think that B Corps and Public Benefit Corporate charters are a proxy for unions are about to get a lesson.

B Corporations and Public Benefit Corporations are feckless attempts at virtue signalling. I am fine with that, but a worker needs to know they do not impact the things that are important to the individual worker.

The world moves on, y’all. Tech worker unions are going to happen.

But, hey, what the Hell do I really know anyway? I’m just a Big Red Car trying to get a paint job.