I will save you some time. It goes like this:

“Any country with its own currency — that’s the United States of America — doesn’t have to worry about how much debt it’s accumulating because it can always print more money to pay the interest.”

There are a few subtleties, but that is about it. I know you are probably thinking, “Has the normally stable Big Red Car gone out of his cotton picking mind?” but I am only reporting the debate. I am not taking a side.

So how the Hell does a country just “print more money,” Big Red Car?

Well, dear reader, in the mind of the MMTers, the central bank just allows the government to overdraw its checking account, giving it a higher limit on its credit card.

MMTers will quickly note that this is exactly what the Federal Reserve did — at the behest of the Treasury — in World War II when the Treasury had unlimited “overdraft” privileges with which to fund the war.

You can get an argument started, but that is, essentially, true. Of course, the US came out of the Great Depression as we sent all the men to war while the women took up their jobs and the new ones created by the war demands. It was a time of enormously high employment. It was a time of extraordinary economic rigor. And, most importantly, we won the damn war.

All of this came to a screaming halt when the war — WWII was 3.5 years for the USA — ended, the military contracted, and the men returned to their civilian endeavors. The government provided the World War II GI Bill that sent a lot of the returning men to school and to buying homes. Mass produced housing came from World War II.

You may ask — “Isn’t that what we do already by selling Treasuries — notes, bills, bonds?”

Yes and no, dear reader. When we sell Treasuries, we absorb liquidity from the market. In the MMTers’ minds, we would not dry up liquidity by withdrawing actual money from banks, investors, and individuals. We would just let the Treasury run a huge overdraft.

If you withdraw liquidity, it will negatively impact job creation.

So, if you embrace that idea, let’s explore some of its bedfellows, shall we?

1. Your astute MMTer will whisper, “MMT is just the next stop on the Keynesian train. Under Keynes in bad times, we increase government spending because, face it, nobody else has any money, right?

John Maynard Keynes who died in 1946 when Bernie Sanders was five. 2. Most MMTers are focused solely on social objectives — government guarantees of jobs, enormous government spending on things like The Green New Deal. Liberals will say, “This isn’t liberal, this is waaaaaaaaaaaaaay out there. This is beyond progressive.”

So, yes, dear reader, you will hear a bit about MMT in the 2020 Democrat Presidential debates. You will be one of the smart ones — you will understand it and know what it means.

3. When the Green New Deal crowd and the 2020 Democrat Presidential candidates are asked, “How are you going to  fund Medicare for all, the elimination of fossil fuels, the elimination of the internal combustion engine, guarantee jobs for everybody, fund the Universal Basic Income?”

Yep, you will hear MMT!

4. The only constraint on spending is inflation — in MMT World. If inflation is under control, the government can spend whatever they want on climate change — whether it is true or not.

If everyone has a job, inflation will not be a problem. This “everyone has a job” idea turns out to be both a big deal to the MMTers politically, but a linchpin of their theory. Keep an eye on this.

5. Because the government now has an unlimted overdraft credit card, taxes are not as important. Government is not “held hostage” to tax collection.

Sure MMTers — for social goodness and virtue — still want to redistribute wealth, punish success, and eat the rich, but it isn’t necessary to worry about revenue because under MMT they have access to unlimited funding.

6. MMTers will mumble that the world is left in the harness of the abolition of the gold standard — the silly notion that a nation’s currency was backed up by gold. When gold was cut loose, currencies were valued by “fiat” and thus, fiat currency.

7. In the MMT catechism, the role of government is to do whatever AOC and Bernie think needs to be done and the specter of deficits — such an archaic and “yesterday” notion — be damned.

Here is an image of Senator and Presidential candidate Bernie Sanders showing a battle wound. He says it was from a shower door (come on?) but many folks say that Larry Summers hit him with Samuelson’s Economics textbook while they were arguing about MMT. You be the judge. 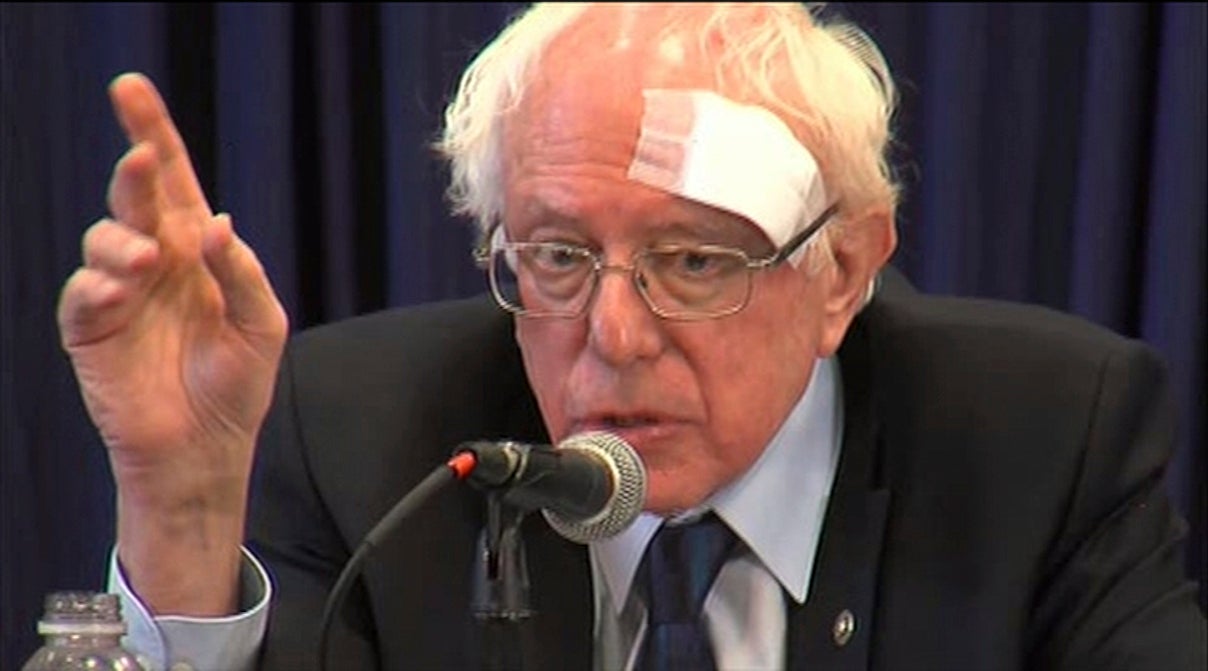 8. The MMT true believer will be quick to note that under the notion of “sectoral balances” when the government runs a deficit the private business sector must run a surplus. [BRC is skeptical on this one.]

9. At the core of MMT is the theory that economies can be steered by the clever management of interest rates. The MMT crowd thinks that interest rates should be zero and that higher interest rates is a paen to the investor class.

Again, I am not taking a side here, dear reader. I am sketching out the debate. Nothing more.

So, those who do not immediately embrace Modern Monetary Theory are quick to point out that government is not particularly good at managing the economy let alone their own affairs. [Neither are Russia or China, two state run bucket shops.]

Government has a broken political budgeting process that never seems to spit out a budget on time, hence the continuing fights on debt ceiling and spending.

Government is not adept at acting quickly — Hell, they have a year to make a paper budget and they haven’t done it in a decade. So, how is government going to throttle back or spur on an economy which may require instantaneous management?

Opponents like to say that interest rates control nothing — the investor class makes its decisions based on growth prospects, not the cost of money. The cost of money is just like the cost of paint — a cost of goods sold, nothing more.

As noted earlier, this MMT cult is not a “liberal” idea; this is a way to the left idea. Such conventional liberals as Lawrence Summers (former Secretary of the Treasury, President of Harvard University) contend MMT is “…fallacious at multiple levels.” He said this in an Op-Ed in the Washington Post.

Opponents are quick to note that the Federal Reserve is not part of the Executive Branch of the government, as is the Department of the Treasury. Folks contend there should not be a shotgun marriage between these disparate elements of the world of finance.

So, dear reader, there you have it. It is an idea that is taking shape, so it is not possible to fully explain it. Everybody is making it up as they go along — I think all economists do this. You?

But, there is a new book just written by three Australian professors. It is 573 pages and can be purchased from Amazon. It will cost you $70.29 + tax and shipping.

OK, so now you know. But, hey, what the Hell do I really know anyway? I’m just a Big Red Car.