I am in New York City freezing my ass off. I come every year to see the Veterans Day Parade (which was a huge disappointment this year). I hate cold weather, but I voluntarily came to NYC, so who can I blame?

I can only blame myself which brings me to my thought for today. We often look for difficult explanations to simple things.

Case in point is something called Hanlon’s Razor. Hanlon’s Razor (like Murphy’s Law and Occam’s Razor) provides us with wisdom when we are looking to explain something we believe to be complicated and transcendental.

Never attribute to malice that which can be adequately explained by stupidity.

In the Army, we used to say that some situation was FUBAR — fucked up beyond all recognition. It was also often a personal attribute. Such as when a soldier was asked his opinion of his platoon leader.

“Lieutenant Jones, he a good egg?”

“Nah, FUBAR,” the soldier would say.

This is not to be confused with Murphy’s Law which stated that “If anything can go wrong, it will go wrong.”

My Jeep driver — very new Jeep driver, a young rascal from Newark, New Jersey who I made my Jeep driver to keep him out of trouble which worked — came to me after I had told him to take the Jeep and get it refueled at the POL (petroleum oil lubricants, the fuel dump) point. I was drinking coffee with some tank officers. It was bitter cold.

We were up by the DMZ in South Korea alone wandering around in my favorite Jeep with a powerful radio looking for a particular small mountain upon which my unit was going to build a road to the top and construct a firing position for the Second Infantry Division artillery to be able to fire into North Korea in the event of hostilities.

This is my favorite Jeep. It later committed suicide by trying to drive through a mine field. It ran over a small mine that blasted its right front wheel off and the engine off its mounts. I was not in it and the two who were walked way from the “accident” with an ass chewing because there had been markings showing there were mines suspected in the area and not to go off the roads.

That’s North Korea in the background. If you look very closely the seat to my left is embroidered with “CO C Co” meaning commanding officer, Charlie company. I got replaced when a captain showed up as I was only a lieutenant, but I had a good run and learned a lot. 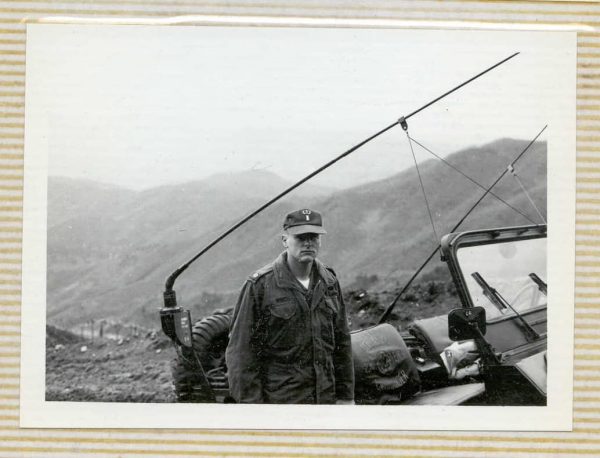 I was a combat engineer officer and we used to blast roads on the side of mountains and turn our D8 Caterpillar dozers loose to cut them in. I once witnessed one of my dozers leisurely rolling down the side of the mountain — who knew that 80,000 pound dozers bounced?

We used to train the dozer operators to “unass” their seat in a hurry if a roadside in the air collapsed. The driver got away safely — he was a nimble sort. We came back a couple of days later to recover the dead, very dead dozer and it was gone. The Koreans had dismantled it for scrap. They are an incredibly industrious people. Luckily, we had pictures of the dead dozer.

I would go over to supply the same day, fill out a form, and a couple of days later I’d get a brand new yellow Cat on a trailer up from Seoul. I couldn’t get a part for a dozer even when I begged, but I could always get a new one. We had to repaint them in camouflage paint ourselves following a pattern we got from supply.

I had passed a tank unit out training that was refueling and whenever I saw fuel, I always got more. I also had four 5-gallon tanks I carried at all times.

My driver came back and told me, “Don’t worry, Lieutenant, I couldn’t get that snout to fit in the tank opening (where the fuel nozzle goes).”

“What did you do?” asketh mois, thinking this was quite odd.

“I got an oil funnel. Worked great.”

Of course, what had happened was he had gone to the diesel tank — which had fatter nozzles to keep people from filling gasoline-powered vehicles like my Jeep with diesel. [Tanks take diesel, but their Jeeps, like mine, take gasoline.]

After he emptied the tank (it has a convenient plug on the bottom of the fuel tank to be able to clear crap out of it), I sent him over to the gasoline tanks and all was well. But it was, as usual, both FUBAR and an example of Hanlon’s Razor.

Later, of course, he told the men that I had told him to fill the Jeep with diesel. What did the men say about their company commander? “FUBAR!”

But, hey, what the Hell do I really know anyway? I’m just a Big Red Car. Be good, y’all. Need an explanation? Hanlon’s Razor!