I was in the Cleveland Clinic (one of the sponsors of tonight’s Presidential Debate) getting a tuneup when who did I bump into other than Chris Wallace of Fox News. He needed a shave, wore sunglasses, a mask, a Beto For President 2020 tee shirt, khaki shorts, and flip flops.

Later I would find out that the Beto campaign had a closeout sale on its campaign materials and sold them for $1.29/each or ten for $10. Chris stocked up. Told me, “I wear them when I do yard work.”

We had a chat. 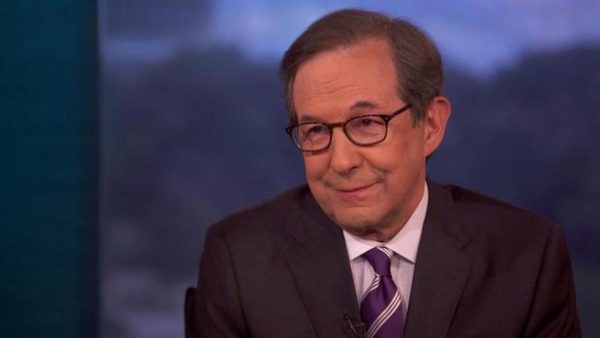 “Chris, what are you doing here?”

“Hello, Big Red Car, it’s been a few years, hasn’t it? You look great. Might need a little paint, but who doesn’t?”

“Thanks, Chris, but the question was what are you doing here?”

“I usually ask the questions, but if you have to know I’m getting a couple of vitamin shots and some Adderall. Big night tonight. You going to watch?”

“Of course. Biggest election in the history of mankind. You ready?”

“Big Red, I was born ready.” We both laughed, him more than me. “Yes, I’ve been preparing for this for a week. Looking forward to it.”

“So, Chris, may I ask you a sticky question? Why have you never been upfront about your being a registered Democrat for decades?”

“Didn’t think it was important. Why do you care?”

“Really, Chris? You’re moderating a debate debate between the nominees of the Republican Party and the Democrat Party and you don’t think it’s important to acknowledge a conflict that you are a registered Democrat and likely to support the nominee of your party?”

“Well, when you put it like that, Big Red Car, I guess maybe I should.”

“Of course not. I don’t take advice from 1966 Chevrolet Impala convertibles regardless of how wise you think you may be. I’m Chris Wallace and I approve that message.”

He laughed. I did not.

“So, have you sent the questions over to Joe Biden’s camp?”

“Yes. That’s a joke, Big Red Car. I did leave them on my desk when his campaign manager came over to chat, but I can’t imagine he took a picture of them.” Wink, wink. “Not sure it would make any difference if I did give them the questions.”

“Will you ask President Trump what it feels like to have been demonized as a war monger, to have been accused of wanting to start World War III and now being nominated three times for the Nobel Peace Prize?”

“No. Why would I do that? I do have to say nobody saw this coming — defeating ISIS, killing the Caliph, pulling out of Syria –boy was Jim Mattis wrong on that one — pulling out of Afghanistan, tamping things down with North Korea, and these historic peace treaties in the Middle East? Wow. I bet he gets the Nobel Peace Prize.”

“Will you ask Vice President Biden why he took his son, Hunter Biden, on Air Force Two to Iraq, China, Russia when he was conducting personal and private business?”

“Anything about Hunter Biden?”

“Will you ask President Trump if he paid any taxes for the last fifteen years?”

“I intend to drill down on that as hard as I can. Why wouldn’t I? I know it’s an unsourced New York Times story — even I think they’re fake news — but you work with what you have or what you can make up is what I always say. So, sure, expect some tough questions on that subject. I am looking forward to making him squirm.” His visage was gleeful, excited.

“Will you ask Joe Biden if he let his fingers do the walking with a young staffer named Tara Reade in a Senate hallway?”

“No. It isn’t true. It never happened. She was asking for it if it did. Plus, he was a Senator, right?”

“Don’t the Dems preach we should believe the woman, honor her accusations?”

“No. That only pertains to Republican Supreme Court nominees whose last name starts with a ‘K.'”

“Speaking of Supreme Court nominees — this latest one, Amy Coney Barrett, quite impressive, no?”

“Not really. Sure she graduated #1 from Notre Dame Law, clerked for a Supreme Court Justice, was some kind of teacher of the year thing at Notre Dame — man are there a lot of Catholics at Notre Dame. Place is lousy with them. She’s a religious extremist — that’s not me speaking, that’s Bill Maher.”

“A sense of humor is important in a President. Look, Big Red Car, I don’t like where this conversation is going. I think the doctor is calling me.”

“Ask Joe Biden why he keeps telling people he graduated at the top of his law school class when he was #76/85?”

“Not important. That was more than half a century ago. I also don’t intend to ask why he keeps telling people he went to Delaware State an Historically Black College or University. I don’t get that.  But, not important.”

“Couple more questions, please indulge me. How about the stark comparisons between Trump and Biden on policy — taxes, energy, foreign policy?”

“Be more specific, Big Red Car. I really need to go.” Chris looks at his watch, makes that “eating earthworms” face of his, and takes a step toward the treatment room.

“OK, Joe Biden is going to raise taxes massively on individuals and corporations at the time we are in the midst of the post-pandemic economic recovery. How can the economy withstand that kind of pressure?”

“Yes, he is. The simple truth of it is that the economy cannot possibly withstand it. It will kill the recovery, but I will not be asking anything about that. I really have to go.”

“OK, how about energy independence? The US is finally weaned from the sugar tit of Middle Eastern oil. This allows us to be circumspect as it relates to Middle Eastern tribal beefs. Any questions about that?”

“The man wants to ban fracking and the internal combustion engine. Any questions?”

“No, no, a thousand times no. That really is a loopy idea, isn’t it? He wants to do it within twelve years. Nuts.”

“Any truth or backstory to the drug testing, the ear device inspection, the two thirty minute breaks?”

“Yes and no. I hope Joe Biden is on drugs tonight. God, I hope he is on drugs. Nine o’clock is way past his bed time. I understand he asked if it would be OK to wear his jammies, a robe, and slippers, but his campaign said he could sleep in tomorrow morning. The ear piece? Yeah, get him one. Somebody is making up all his answers anyway, right? Can he go for 90 minutes on his feet? Probably not, but maybe if he doesn’t drink a lot of fluids, if he takes a couple of Adderall, who knows? He could surprise us.”

“China? Joe Biden says we have nothing to fear from China, that they are our friends. Trump says they are the Devil. Who is right?”

“Look, Joe Biden is a tired, fossilized old man. He belongs on the beach somewhere in Florida, God’s Waiting Room I call it, living out his Golden Years, but the Dems had a thin bench and here we are. Sure the Dems intended to be the party of new ideas, but how did they get this guy who spent half a century in Washington basically doing nothing to be the standard bearer of the idea party? Look, AOC is too young under the Constitution. Not the Dems fault. Sorry. I was just venting. China is our biggest economic and military rival. Any moron can see that.”

“When you are as old as Grandpa Joe, your vision begins to wane. Stop with all the questions, Big Red Car. Think I don’t know what you are doing here? You’re a helpless, hopeless, deplorable Trump booster. You’re a hack. Now, I have to go. I will see you tonight.”

“Who wins the debate?” I asked.

“You mean other than me? That isn’t a joke, by the way. You can quote me. Joe Biden wins. If he’s awake when the final bell rings, then he wins. Look nobody thinks he can hang with President Dragon Energy. All he has to do is be on his feet. Plus, all the stories have already been written. The guy will be like John Kennedy. Now, I have to go, Big Red Car. Please leave me alone.”

What are the chances of two hacks bumping into each other at the Cleveland Clinic — one of the sponsors of tonight’s first Presidential Debate (9 PM Eastern time)?